In the June, 2002 issue of Travel & Leisure Stephen Drucker wrote
The Classics Strike Back:

"After years of being overshadowed by sleek new competitors, America's historic grand hotels are making a major comeback. Sometimes more-complete redos are in order. Until recently the Hotel del Coronado, built in 1888, sat on the beach in San Diego like Victoria in mourning. But a repositioning by Destination Hotels & Resorts has accomplished the unlikely. "We've become less formal and more upmarket," says Michael Hardisty, the managing director.

None of the rickety charm of the old wooden structure, with its cage elevator and Crown Room brunches, has been lost, but the rooms are newly comfortable, and cottages are planned to meet the modern lust for privacy. Air-conditioning has finally been installed. And a handsome new oval lawn lets the whole place breathe-you can finally see the beach, and stroll the grounds, and eat outdoors.

Some Like It Hot, the 1959 classic with Marilyn Monroe, was filmed at the Del, and you're never allowed to forget it. The movie plays several times a day in guest rooms, free of charge. Throughout the hotel, grainy photographs of stars romping in a black-and-white past remind you that Hollywood history is all around you. By the time you go to sleep, you're convinced Marilyn is in the next room. This theming is so effective that there's a shop called 1888, which focuses on the Del's history. Its most consistent seller is Taschen's annotated screenplay of Some Like It Hot, a coffee-table book bound in yellow Ultrasuede. It costs $150."

The Del has completed a $55 million restoration which has resulted in brand new oceanfront dining, redesigned and airconditioned Victorian rooms, a new bar and retail venues. A grand lawn now reconnects the beach and ocean to the Victorian Building. 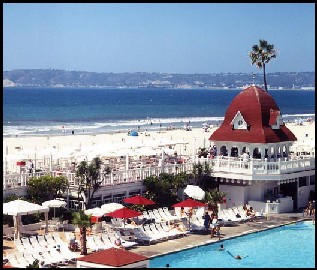 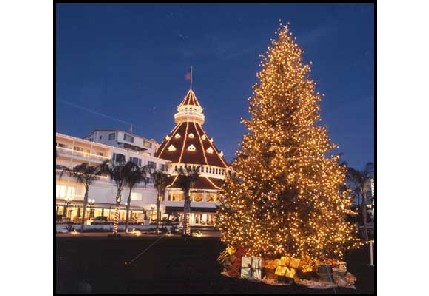