We were on a roll! 7 restaurants and 2 hotels in 4 days. We decided to take a trip that would involve a hotel in a very small beach town and one in a very large cosmopolitan city.  We wanted to eat a range of foods from delicatessen to fried chicken to hamburgers to much more formal dining that included lobster, foie gras and caviar.  And we didn’t want to spend a lot of time driving.  This trip began in San Diego, California, took us to Redondo Beach, then into Los Angeles and back to San Diego.  We left on a Friday and returned on Monday, just enough time to eat ourselves silly.

Our first stop was for lunch on Friday.  About an hour northeast of San Diego, in Orange County, we thoroughly enjoyed eating at Houston’s, a long time favorite of ours.   We spotted something new on the menu and elected to try it.  California Sushi Salad contained 3 different sushi rolls, each cut into 3 pieces: miso dressed salad with spicy tuna, crunchy shrimp and California rolls.

Houston’s diverse American classic dishes are sure to please.  Houston’s is known for their excellent entrée salads, fall off-the-bone barbecue pork ribs and cheeseburgers made with fresh ground chuck and served on a house-made bun. 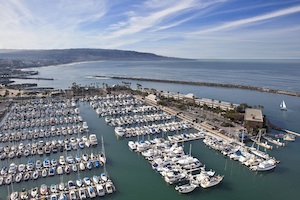 Our next stop, where we would spend the night, was The Portofino Hotel & Yacht Club at King Harbor in the quaint beach town of Redondo Beach.  This is not a new hotel but a very nicely renovated one.  Think $11 million in renovations that showcases a new ocean-inspired theme for the lobby, upgraded guest rooms and baths in a contemporary nautical theme and five new luxury suites. Located only six miles from Los Angeles, The Portofino is the only Los Angeles hotel in the area located directly on the Pacific Ocean. 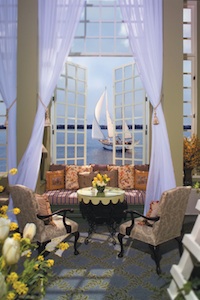 Be sure and secure a room with an ocean view.  With that comes a family of California sea lions living on rocks not too far from the hotel.  They frolic, feed and bask in their natural habitat. Earplugs are provided in the rooms for light sleepers but I found the sounds to be quaint and friendly.

One comes to The Portofino to relax. You can enjoy the scenic walking trails, visit the Redondo Beach pier and marina, or secure one of the hotel’s complimentary bikes and spend your time sightseeing.  There is also a pool and hot tub for guest’s use.

Dinner that night found us at BALEENlosangeles that overlooks the tranquil Portofino marina, which is adjacent to the hotel.   This is one of the Noble House Hotels & Resorts fine-dining establishments.  We had just eaten at BALEENsandiego a few weeks before.  Both meals were quite enjoyable and it was fun to compare the two menus.

We began with Seasonal Oysters and the Seared Sea Scallops. The oysters were more than fresh and served with a house made cocktail sauce and horseradish.  The scallops came with a shitake, jalapeno and sweet corn cream sauce and a sautéed dried cherry and plantain relish.  We chose a fish and a steak for our entrees.  I ordered the Roquefort Crusted Filet and asked that the beef be seared on the outside with a medium center.  My wish was their command!  The filet sat on a bed of short rib ragout with grilled asparagus, potato crisps and a port wine demi.   We also ordered the Miso and Sake Alaskan Black Cod, which was served over a soba noodle salad in carrot ginger vinaigrette with tempura asparagus on the side.  At this point we were full but felt it our duty to head into dessert.  I ordered the Di SARONNO Mascarpone Strawberries.  Out came 6 strawberries that had been cut in half and stuffed with the cream, then dusted with vanilla pistachio grounds.  Out came my camera!  We also tasted the Anjou Pear and Croissant Bread Pudding that is served with a vanilla spiced rum anglaise and crème fraiche gelato.  It too was delicious. And out walked 2 stuffed and happy diners.  Not only was the food exemplary, but also the service was ideal. 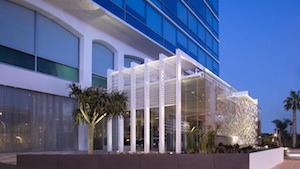 The next day found us driving into Los Angeles.  We checked into the Hotel Andaz in West Hollywood, where we would spend the next 2 nights.  The Andaz, a new venture from the Hyatt brand, stands for more than just the name of the West Hollywood hotel.  Meaning "personal style" in Hindi, they are committed to the latest in style, service and high-touch innovation.  Think minimalist décor, cosmopolitan ambiance and great views of the Los Angeles  Hollywood Hills or the Sunset Strip and downtown Los Angeles, depending on where your room is located.  You’ll also find yourself with a front row seat to the Sunset Strip, one of the most famed walkways in the world.  Plan to spend some time (day or night) on the rooftop Sundeck and enjoy the heated pool, poolside chaise lounges and the spectacular city views.  Hotel amenities include a 24 hour fitness center; 24 hour room service; complimentary wireless Internet; complimentary, non-alcoholic mini bar that is replenished daily; complimentary local phone calls and in room safes.  You’ll also want to check out the unique art pieces from L.A. artists that are on display throughout the hotel.

Lunchtime took us to one of the Jerry’s Famous Delis in Los Angeles.  There is one quite close to the Hotel Andaz, also in West Hollywood.  Corned beef sandwich and whitefish on toasted bagel was the order of the day but the Jerry’s menu is quite extensive.  Bakery goods and a to-go section are a part of Jerry’s. Jerry’s has been in business for more than 30 years and has 8 locations in the general Los Angeles area. 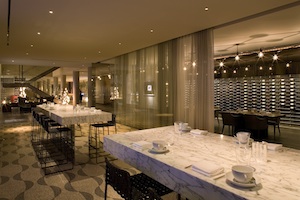 Dinner Saturday night was enjoyed at the 100 seat RH restaurant & bar at the Hotel Andaz.  You’ll find seasonal menus with Southwestern French “market to table” cuisine that uses California’s fresh ingredients. Your dinner will be prepared in a well-oiled 1,515-square-foot exhibition-style kitchen by Chef Sebastien Archambault, a French-trained chef who has worked under such luminaries as Alain Ducasse, Jean-Francois Rouquette and Guy Savoy. The only problem will be deciding what to order, as so much of the menu is enticing.  We decided on the Hudson Valley Foie Gras terrine; Six Fanny Bay Oysters and a Roasted Boothbay Harbor Lobster for appetizers. This was a lot of food, especially after devouring the excellent house made rolls that are served warm with butter. Entrees were the Seared Diver Scallops and 12-Hour-Cooked Boneless Suckling Pig.  The latter, served on golden Yukon potatoes with shallot jus, piqued our interest, as this is an unusual item to find on restaurant menus.  Dessert was not to be missed.  We ordered the Red Blossom Farm Berries Mille-Feuille, that included a luscious pastry cream, and the Warm Cherry Clafoutis, reminiscent of Chef Archambault’s Southwestern French influence.

The open kitchen and communal tables give the restaurant a friendly feel. This barrier-free venue allows spaces to flow seamlessly from one area to the next and is sheer “cooking as entertainment,” as diners take in a frenzy of activity just a few feet from their tables.  You’ll find cookbooks on tables throughout the restaurant and RH is open for breakfast, lunch and dinner.  The adjoining bar offers both classic and authentic cocktails.  For sure, a place to see and be seen.

lthough we thought we might never eat again, Sunday found us at Roscoe’s House of Chicken ‘n Waffles.  The concept intrigued me so I had to check it out.  Roscoe’s has 5 locations in and around Los Angeles and has been “Pecking Around Since 1975” when an all night take-out restaurant began.  The concept came from Harlem but fried chicken and waffles are only part of the story.  Roscoe’s also offers greens, Mac and cheese, hot water cornbread, red beans and rice and much more.  Don’t be surprised if you see a line at the front door.  Fried chicken this good is not easy to find!

Our Sunday night treat was the The Burger Kitchen, a restaurant that offers 36 gourmet char-broiled burger variations—from Thai burgers to Greek burgers to Moroccan burgers.  And Texas chili burgers, Hawaiian burgers, lobster burgers and shrimp-patty burgers. I can go on and on. And then there are dessert burgers. Think chocolate burger (two chocolate chip cookies with ice cream in between).

Open 7 days a week for breakfast; lunch and dinner, The Burger Kitchen has a large selection of 22 craft beers and 35 wines by the glass or bottle.  I tasted the coconut-chocolate ale that was a heavy, rich blend. But the BIG thing here is the meat. Pat LaFrieda has been a New York City institution for more than 90 years, or three generations.  And his meat is being offered on an exclusive basis in California at The Burger Kitchen.  I tried The Natural, priced at $29, which includes eight ounces of meat made with a 40-day dry-aged blend that includes short ribs, steak and brisket.  The burger also includes a toasted brioche bun with romaine, tomatoes, sliced red onion and a choice of Camembert or white cheddar cheese.  There is also a LaFrieda Kobe Beef Burger for $17 and From Siberia with Love, which includes LaFrieda meat on a toasted brioche bun topped with farm raised osetra caviar for $75.  The quality beef is tender and juicy.  You’ll have to try it for yourself to decide what to order, as there are so many choices. The Burger Kitchen also offers soups, salads, Australian meat pies, root beer floats and milkshakes.

Monday found us in our car ready to drive back to San Diego.  But we had one meal left.  We stopped at R + D Kitchen in Santa Monica on the way home.  What a treat!  We didn’t realize it was part of the Houston’s upscale chain of restaurants.  Classic American dishes are what you’ll find here plus service is offered indoors and outdoors.  I enjoyed The Newporter, an entrée salad of roast chicken, greens, apples, bacon and cashews.  The Shrimp Louis was another entrée salad with jumbo shrimp, heirloom tomatoes and café vinaigrette.  There are numerous sides on the menu that include deviled eggs, warm potato salad, and coleslaw.  A Reubenesque Sandwich of corned beef and baby Swiss on toasted rye and a three-layer Carrot Cake with Toasted Walnuts and Mascarpone Icing help round out this delicious menu.