Australia: The Wonder Down Under

I'm smitten. I admit it. And the object of my affection is huge (even if the smallest of its kind). You see, my passion is for a continent -- Australia, the big, massive wonder down under -- and this sprawling, muscular, energetic land has seduced me completely.

What makes Australia so special? Well, first and foremost, it's the people. To start with, they genuinely love Americans, and that in itself makes them endearing. The Aussies have a great attitude about life -- they're laid-back, carefree, relaxed, playful and fun. But they're also serious about their food, wine, culture and history. Yet they never take themselves too seriously. The Australian trait I love best is their refreshing purity -- an innocence that makes me wistful for simpler times past here in the good ol' USA. As one Aussie cab driver said: "Australia's like you lot [the U.S.] were thirty years ago, mate, and I hope we don't change." Me too.

Don't get me wrong, Australians are not at all naïve. On the contrary, they're a remarkably innovative and savvy people. Their originality is invigorating. Indeed, their cuisine and wines -- two bellwethers by which many rate a country -- are some of the best in the world.

Australia offers something for everyone, only in a bigger and better way, which clearly makes it a traveler's paradise. For those who want the energy of a large, cosmopolitan metropolis there's Sydney or Melbourne (pronounced MELL-bun by the locals). There are also charming, mid-size cities like Adelaide (South Australia), Brisbane (New South Wales, east coast) and Perth (Western Australia). Then there's Queensland's lush tropics and legendary Great Barrier Reef, and the scenic wonder and surprisingly mild climate of Tasmania and the desertlike vastness of the Northern Territory's outback, where swagger meets sweat. And there's much, much more in this immense, multifaceted wonder down under.

Long gone are the days when Australian food was boring meat-and-potatoes fare designed only to feed the stomach and not the soul. Today Australia is at the vanguard of food innovation and you'll find cutting-edge cuisine on a par with some of the world's finest. 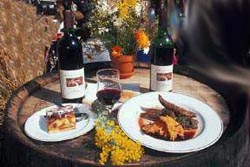 And the wine . . . ah-h-h-h, the wine. Once primarily a beer-drinking populace, Australians now consume twice as much wine annually as Americans. And no wonder! Australia produces an amazing collection of superlative wines by myriad world-class vintners including Barossa Valley, Henschke, Jacob's Creek, Leeuwin, Penfolds and Rosemount, just to name a very few.

And can you imagine a country where tipping isn't status quo? Service-industry employees from restaurant servers to cab drivers to hotel employees earn a livable wage and simply don't expect tips. Australians typically don't tip unless they receive exceptional service. Tipping in finer restaurants is certainly acceptable, but more than 10 percent is considered excessive.

English is the language of the land, which doesn't mean the Australians are easy to understand. Once your ears are tuned into their distinctive cadence, broad pronunciation and vocal upturns to end a phrase, you still have to contend with their fondness for "slanguage": abbreviations and nicknames for almost everything. But, at least for me, their colorful lingo just make the Aussies more loveable.

Visiting Australia is easy. All you need to get there is a visa, which airlines can issue automatically. A U.S. driver's license and a sense of adventure will put you behind the wheel. Of course, driving on the "wrong" (left) side of the road takes some getting used to. Renting a car with automatic transmission will help ease your angst. Still, expect to turn on the windshield wipers several times at first when you're trying to use the turn signal.

So get going, mates. You're headed for a fair dinkum experience in the "Wonder Down Under"!