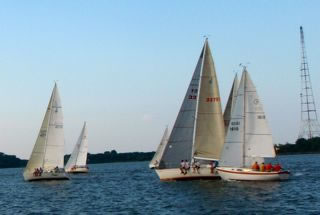 In Annapolis, the self-styled sailing capital of the U.S., you needn’t present your Gold Card at the city gates.  Unlike Newport, its sailing kin to the north, Annapolis is friendly and accessible even if you can’t tell port from starboard.  Liking the water does help, however, as your best moments in this historic corner of Maryland will be found on the Chesapeake Bay.

Where to stay.  The Westin Annapolis is as soothing as a summer breeze and that’s the idea at this modern, gracious hotel.  Shades of sand and moss call in the natural world and play against dark wood accents and when the Heavenly Bed meets the Heavenly Shower, it’s a tie and everyone wins.  Choose adjoining rooms, the better to enjoy a king bed alongside a cozy divan while kids romp about their double-bedded space.  Multi-generational travelers can add a parlor to the mix and enjoy ample living and dining space with a 21st-century Murphy bed thrown in for good measure.  The heated pool is a hit with kids and the upper West Street location an easy stroll to the waterfront.  100 Westgate Circle, Annapolis  (410) 972-4300.  Doubles from $199. 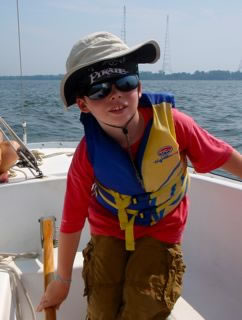 Sailing, sailing away.  Schedule your visit to Annapolis over a Wednesday night (during the summer months) and you’ll have a ringside (seaside?) seat for the Wednesday Night Races sponsored by the Annapolis Yacht Club.  Expect to see over 140 sailboats compete for bragging rights, and maybe a cold one, at the end of the night.  Unless you’ve sailed in yourself, your best viewing bet is to hop on board the Schooner Woodwind, a 74’ sailing vessel that is a replica of the gleaming wooden “yachts” built in the early 20th century.  The sunset sail on the Chesapeake Bay is a participatory event for kids, who help hoist the sails and cheer the crew as it competes against its sister ship, the Woodwind II, in a race to the finish line.  If the bug hits, whisk the kids down to the Annapolis Sailing School, one of the country’s oldest.  The “Annapolis Way” emphasizes hands-on learning, which means the entire family will be on the water, sailing, in less than an hour.  Half- and full-day classes are available on 24’ Rainbows, boats that tip but won’t flip.  The KidShip Sailing School is designed for junior sailors ages five to fifteen and runs both weekends (2-day) and weekdays (5-day).  Our young son was tacking and jibing within thirty minutes and while he might have been a natural, our instructor was a study in patience and a natural with kids. 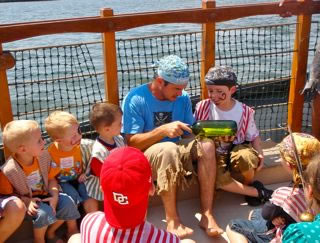 Ahoy, Mate!  Is something lurking in them thar waters?  If you sign up for Pirate Adventures on the Chesapeake, you might find out!  Join Cap’n Crabby, first mate Santiago and assorted lads and lassies for a rollicking experience on the high seas.  Kids check in first for costumes, face painting and “tattoos” then board the Sea Gypsy, a pirate ship that takes no prisoners.  Swearing an oath to keep enough treasure “to buy the whole world,” the motley crew finds a map that leads to a grizzled pirate trying to board (and quickly dismissed with water cannons).  After reading a message in a bottle, the kids hit the X that marks the spot and hoist a treasure chest of shiny loot (and they do share).  A final haul of pirate grog is refreshing root beer.  The under-12 set will find no more enjoyable experience while in Annapolis. 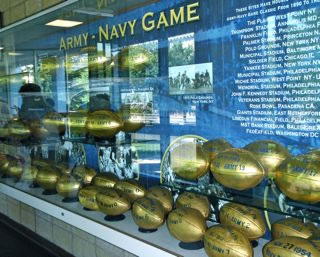 Teens and their parents will be agog at the U.S. Naval Academy, which has been molding sailors into officers for over 150 years.  The campus is leafy splendor amid Beaux Arts buildings and world-class sporting facilities and its 4,400 midshipmen are the cream of the crop, seeing as how less than one in ten applicants makes it through the door.  It’s all about tradition at Navy and if fighting your way to the top of a greased monument creates leaders for battle, well, that’s a good thing.  Plebes are only allowed off campus on Saturdays, upperclassmen get to break away on Friday nights and by the time they graduate, every midshipman must be able to swim for forty minutes in continuous motion – in a khaki uniform!  The first Army-Navy football game was held in 1890 and, yes, Navy does hold a small lead in the storied rivalry.  A visit to the non-denominational Navy Chapel, awash in magnificent stained glass and the final resting place of John Paul Jones (“Sir, I have not yet begun to fight”) ends what is easily one of the most informational tours anywhere. 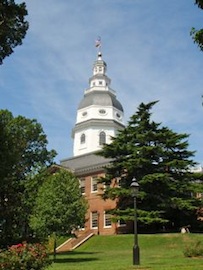 Stately Pursuits.  In a city filled with historic buildings (it was the first peacetime capital of the U.S.), children will be most interested in the Maryland State House, an elegant structure dating to 1779 and topped by a wedding cake wooden dome that is the largest of its kind in the country.  An 800-lb. wooden acorn, a sign of wisdom, adds extra heft at the tippy-top.  Back indoors, George Washington resigned his commission as Commander-in-Chief of the Continental Army in 1783 and the Treaty of Paris, ending the Revolutionary War, was ratified in the same Old Senate Chamber in 1784.  It’s said that General Washington enjoyed coming to Annapolis to bet on the ponies and this is where he took Martha to the theatre.

Make like the Washingtons and pay a visit to the Annapolis Summer Garden Theatre, an all-volunteer, non-profit organization that stages musicals under the stars on the site of the former Shaw’s Blacksmith Shop.  Buddy – The Buddy Holly Story and Forever Plaid are among the delightful on- and off-Broadway selections and it’s a good bet they’ll appeal to kids of all ages. 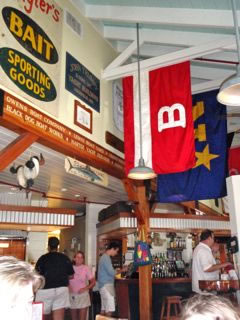 Where to eat.  Pusser’s Caribbean Grille is perched over Ego Alley, a slender waterway near the City Dock where resplendent yachts stand sentinel.  The sideshow is mere prelude for the showy food and if you’re at an outdoor table, it will rate even higher in your estimation.  The black bean soup is island living in every bite while the shrimp and scallop chimichurri is a festival of seafood atop penne pasta.  80 Compromise Street, Annapolis  (410) 626-0004.  Life couldn’t be easier in the “Maritime Republic of Eastport,” a spit of land across the Spa Creek Bridge that’s home to sailors for whom it’s all about the sport.   A kindred spirit is Dick Franyo, whose Boatyard Bar and Grill is consistently rated one of the best sailing bars in the world.  No salty dogs here, rather, a polite crowd of sailing aficionados who favor the whitewashed establishment for its singular food and save-the-bay sensibility.  The lump-meat crab cake knows no peer in Annapolis and the Cuban shrimp salad offers up mouth-watering shellfish in a citrus glaze that does Cuba-phile Franyo proud (ergo, the cozy Pilar Bar out back that’s a nod to Hemingway).  Don’t leave the Boatyard without a logo tee or hoodie since 1% of all sales go to Bay charities and other environmental causes.  Severn Avenue & 4th Street, Annapolis  (410) 216-6206.  Down the street is Carrol’s Creek Cafe, a white-tablecloth affair with tables overlooking Spa Creek.  Sunset dinner is the winner as seen in a cream of crab soup that will please even little ones and a perfectly-cooked filet mignon topped with caramelized onions and resting atop a red wine demi-glace.  410 Severn Avenue, Annapolis  (410) 263-8102.  At Galway Bay, the luck of the Irish is evident in Miss Peggy’s crab cake, a pleasingly plump mound of crab with little filler that feeds everyone from the city’s movers and shakers to local politicians who labor at the State House across the street.  63 Maryland Avenue, Annapolis  (410) 263-8333. 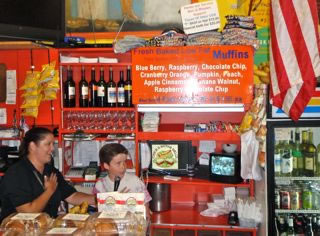 Chick & Ruth’s Delly on Main Street is where pols start their day and they’d be wise to show up by 8:30 a.m., which is when the Pledge of Allegiance is recited daily.  Owner Ted Levitt usually does the honors but if you ask nicely, it could be your kid at the mike.  The restaurant’s orange-and-yellow décor is as cheerful as a sunny-side-up egg though you’d be wise to order the crab and mozzarella omelet or the homemade corned beef hash.  165 Main Street, Annapolis  (410) 269-6737.  Every good Annapolis day should end at the Annapolis Ice Cream Company, regularly voted “best of” by in-the-know locals and whose signature flavors include Apple Pie, Oreo and Chocolate made with imported European cocoa.  196 Main Street, Annapolis  (443) 482-3895.  Last stop is Mike’s Crab House on the South River, where a dozen crabs dusted with Old Bay seasoning and piled high on brown paper is just how the locals like it.  3030 Riva Road, Riva  (410) 956-2784.

What else?  eCruisers are six-seat electric vehicles (think golf cart on steroids) that will pick you up and pack you off to one of over a dozen downtown restaurants for free.  They’re a great way to beat the heat and the kids will love ‘em...Watermark water taxis can ferry you in and around Annapolis harbor for a sliding-scale fee depending upon your destination (Eastport, Back Creek, etc.) and offer little feet (okay, big feet, too) a pleasant respite.  The company also operates a fleet of larger touring craft including the Harbor Queen.