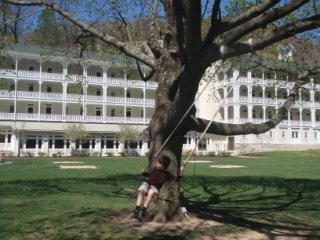 It was the Native Americans, in the late 1700s, who first told Dr. John Anderson of the curative properties inherent in the mineral springs in and around Bedford, Pennsylvania.  Soon after, Dr. Anderson built a hotel in Bedford to cater to guests eager to take the waters, and it quickly became a destination for Presidents and celebrities.  Time was alternately kind, and not, to the Bedford Springs resort and the property, a National Historic Landmark, was closed in the 1980s after falling into disrepair.  Under new ownership, the property was the beneficiary of a painstaking $120 million restoration and reopened its doors in 2007.  Suffice it to say that the new look would make Martha Stewart swoon. 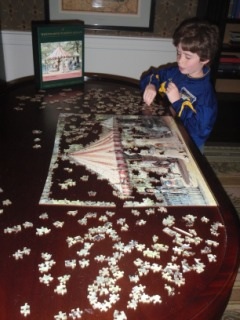 The lacy verandas and glossy black rockers of days gone by still greet you on arrival but the real surprise is inside.  Bright white wainscoting and ample crown molding are the perfect foil for walls saturated in color.  Carpets, curtains and fabrics couldn’t be richer and the juxtaposition of a pink-and-green satin plaid backing on a distressed leather wing chair is brilliant.  A magenta settee here and a striped divan there enhance this haven for luxurious relaxation and the fun doesn’t end there.  The adjacent Duke of Bedford Library is English-manor-gone-glam with a whimsical touch being a Wentworth Wooden Jigsaw Puzzle, whose aptly-named “whimsies” are laser-cut pieces in the shape of  an umbrella, dog, etc.  Turn the corner for a row of tufted chairs facing the spring-fed indoor pool and then there’s the spa corridor...  That’s how it goes at the Omni Bedford Springs Resort, where Dr. Anderson would be rightly proud of the care guests are receiving.

The Frontier Tavern at the far end of the property isn’t so much Wild West as it is Western revival.  Echoes of the west fill the room but the mood is more suited to latter-day cattle barons who appreciate good food.  My house salad is filled with he-man chunks of goat cheese, orange sections, cranberries, walnuts and the freshest mesclun while Fen’s glistening portobello mushroom is stuffed with spinach and feta and topped with bacon and roasted red peppers.  Our son opts for a cheeseburger on a Kaiser roll and it’s love at first bite so I order one, too.  Fen strikes out on his own with the open-faced turkey sandwich, where huge hunks of white meat are napped in (cran)berries and resting on a puddle of giblet gravy.  While the bread-and-butter pudding beckons, we opt for dessert outdoors at the roast-your-own-s’mores fire pit.  An Adirondack chair, a crackling fire and a bar of Hershey’s chocolate end the evening on a sweet note.

Then-Secretary of State James Buchanan spent three weeks at the Bedford Springs Resort one summer and his tab was thirty dollars.  He also picked up the check for a “Miss Love” who was at the resort at the same time and the ledgers to prove it are prominently displayed in the hotel lobby.  It should come as no surprise that President James Buchanan designated the resort the summer White House during his time in office. 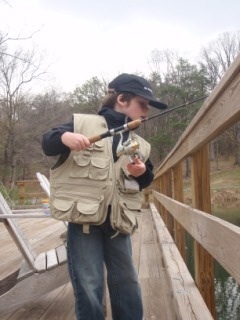 The Old Course Golf Shop acts as home base for those looking to play one of the oldest golf courses in America and it’s also the place to pick up gear for trout fishing at Red Oak Lake, a mile up the road and part of the resorts’ 2,200 acres.  It’s Steven’s first time fishing although my eight-year-old has been requesting this father/son experience for years.  Armed with rod, reel, bait and a multi-pocket vest, my men head out to the ol’ fishin’ hole and get to work.  The fish are smarter for starters and eat baits one and two right off the hook.  Steven goes to his final bait, salmon eggs, and decides to place two eggs on the hook, one up and one back, in the hopes of trapping the elusive fish.  Turns out these rainbow trout are no match for my son’s cleverness and he snags two shimmying fish in short order.  His joy lasts long enough for proud Papa to snap a pic before he releases his fish back to the lake for another go at aquatic chess. 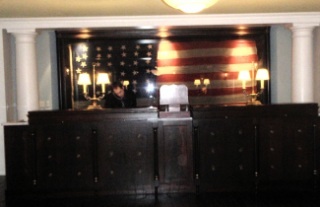 The American flag draped behind the reception desk at the Omni Bedford Springs dates to 1865...er, make that the unofficial American flag.  This standard sports 39 stars when there were only 36 states in the union at the time.  The other three stars were placeholders for Nebraska and the Dakota territories, states-in-waiting that were acknowledged by at least one wannabe Betsy Ross.

Afternoon tea in the hotel lobby is served from 4-5 p.m. and while the Tazo teas are a warming embrace, the real winner is the tray of shortbread cookies.  The dough has been flecked with strawberries and blueberries and the resulting confection is moist and chewy and made for this afternoon serenade. 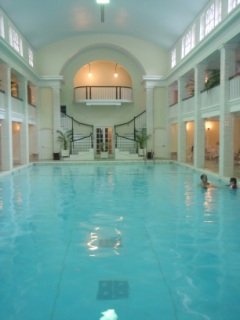 The Springs Eternal Spa takes Dr. Anderson’s “Bedford Cure” and executes it with modern-day precision.  First stop is the Bedford Baths, a five-step ritual available to ladies and gentlemen in their respective bathhouses.  Beginning at the Deluge, I exfoliate with a black walnut-ginger scrub while numerous jets spray water from all angles.  Next is the Aroma Steam, a eucalyptus-infused room warming to both body and soul.  Exiting the steam chamber, I step into a jetted, spring-fed hot tub and make a bee-line for the cold plunge ten minutes later.  Sixty seconds in (did I really last that long?), I head back to the hot tub and consider the curative aspects of temperature shifts and pliable skin.  Satisfied, I step out of the tub and spritz myself with a sealing cucumber mist.

The Spa’s Relaxation Lounge is just that, a fancy of velour chaises and enveloping chairs that would be suitable for napping if everyone wasn’t eagerly awaiting their spa treatment.  A therapist waltzes in and calls my name and we’re off for a Mountain Detox Ritual, wherein I’m massaged to within an inch of my life with two smooth stones the size of an egg, not that I complain.  This adventure is preceded by an exfoliation and followed by a mineral mud wrap, ending with a slather of slimming gel.  Doctor’s orders or not, I return to the Bedford Baths for more Cure at this magical, mineral Spa.

The James K. Polk Suite is named after our 11th President and frequent visitor to the Bedford Springs resort.  Made for multi-generational families, the room is 2,300 square feet of pampering, from the triple-sheeted beds with plump down comforters to the living room with conversation area for 6-12 guests.  Once again, the designers got it right and the furnishings and fixtures are worthy of Architectural Digest, though that won’t help in a spirited game of checkers with mom or dad.  What will surely raise your spirits is the view of the golf course from a veranda that extends the length of the room.  Play on!

Elaine Sosa Labalme is a food and travel writer based in Pittsburgh, PA . When she's not busy as a domestic goddess she's out traveling with husband Fen and eight-year-old son Steven. She hopes to be the next Charles Kuralt.