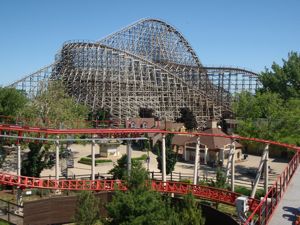 My dad was a Chevy man who drove an Impala throughout my childhood.  Every summer, we’d leave our home in Connecticut and drive to Palisades Amusement Park in New Jersey, my sister and I playing Hangman in the back seat and counting the minutes to our arrival.  By the end of the day, we were plum tuckered out and slept all the way home.  It came as no surprise that my first car was a Chevy Camaro and, even sweeter, I now find myself sitting alongside my husband as we drive our nine-year-old son and his classmate to Cedar Point Amusement Park in a Chevy Equinox SUV.  No paper/pencil games in the back seat this time – each boy is glued to a video screen playing a “Harry Potter” flick while the audio comes through individual, soft leather headphones.  Fen and I listen to surround-sound stereo up front, each of us snug in an auto-approximation of a leather-clad Captain’s chair.  Our musical interlude is interrupted only by the occasional cell phone call, seeing as how my phone has been integrated, Bluetooth-style, into the car’s audio system.

Our 2 ½ hour road trip deposits us at Cedar Point, arguably the roller coaster capital of the world.  Okay, the U.S., for sure.  Dating to 1892, the second-oldest amusement park in North America sits on a spit of land that juts out to Lake Erie.  The breezes that waft in keep the park fresh and if you need a break from all the amusement, you can always hang out at the beach outside the park gates. 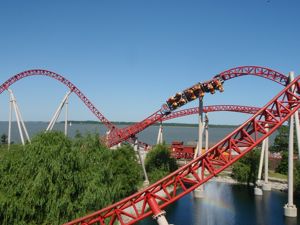 The park is a wonderful marriage of classic rides and thrill rides, since the roller coasters of today are far more than up-down-around.  Cedar Point is home to 17 roller coasters and the Magnum XL-200, opened in 1989, is the steel coaster that put the park on the map.  Millennium Force is a blue steel monster – oops, coaster – which made its debut in 2000 and reaches for the sky in an epic, opening ascent that leaves you dangling over Lake Erie (not really, but it sure feels like it).  After a 90 mph drop, you twist and turn at exceedingly high speeds for two minutes that feel like forever.  A thrill, for sure!  Even more so is the aptly-named Top Thrill Dragster, which slingshots you, aircraft-carrier style, at 120 mph then sends you straight up 90 degrees, over and back at the same right angle.  It’s over in about twenty seconds and my husband’s glasses were plastered to his face for a reason – can you say extreme?  Daring youngsters and adrenaline junkies of all ages will go wild on America’s self-styled “roller coast.” 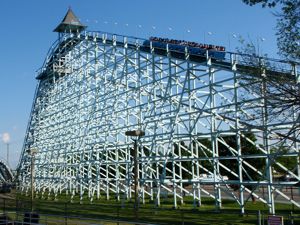 Mere mortals will fall in love with the Blue Streak, Cedar Point’s iconic wooden coaster which opened in 1964.  Sweet and petite next to the park’s giant coasters, the Streak’s still got game and the clickety-clack as you traverse curvilinear track will leave you catching your breath.  “This is the best coaster in the park!” exclaimed my intrepid son.  More classic rides include a Ferris Wheel, Tilt-A-Whirl and Lolli Swing (expect flip-flops to flap gently to the ground as you fly about).  Best of all is a Sky Ride that takes you across the park, gondola-style, for a panoramic view of the fun.  Even so, no serious amusement park could exist without water rides these days and Cedar Point has three, starting with a log flume and progressing to Snake River Falls, whose easy turns lead to a steep plunge and wall of water that soaks everyone in the boat.  Thunder Canyon is navigated in a 12-person raft and the inflatable craft will turn this way and that, the better to get wetter. 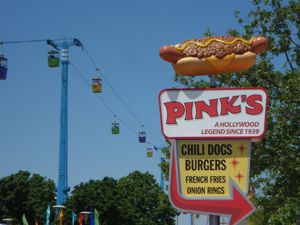 Hungry yet?  Time to stop at Pink’s Hot Dogs, the east coast outpost of an L.A. Institution.  As the name suggests, order the weiner and if you top it with chili, expect to eat two.  The fries are crisp and you can eat it all outdoors under cheerful red-and-white striped umbrellas.  You’ll also find fudge, taffy, caramel apples and chocolate-covered bananas at Cedar Point – hey, it’s an amusement park!  Still got time on your hands?  Spend the night at one of several hotel properties onsite and get into the park an hour early the next day.  Pay a visit to Soak City later in the day, where 18 acres of water-logged fun are open from Memorial Day to Labor Day and slides like Eerie Falls are well worth the price of admission.