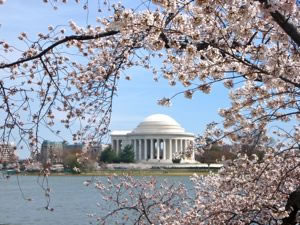 The mayor of Tokyo, Japan donated 3,000 cherry trees to the United States in 1912 and it is this gift which is celebrated during the annual National Cherry Blossom Festival in Washington, D.C.  A rite of spring, the 2012 festival marks the centennial of a gesture that brings forth more than a million visitors eager to see the trees’ delicate pink-white blooms.  A two-week calendar of events keeps festival-goers busy but the simple pleasure of strolling or biking past blooming trees should not be missed. 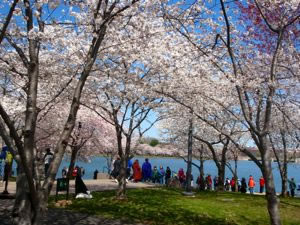 How to brave the crowds?  Easily your best and most enjoyable bet is “Blossoms by Bike,” a two-hour guided bicycle tour offered by Bike and Roll DC.  More ride than tour, you’ll make a beeline past monuments and out to East Potomac Park, where a stand of graceful Yoshino cherry trees lines the roadway out to Hains Point.  Heading toward West Potomac Park, gaze across the Tidal Basin and its grove of original plantings cheek-to-cheek with the Jefferson Memorial (it’s here you’ll see Kwanzan trees bearing a pinker bloom).  The newer FDR Memorial, a series of four outdoor “rooms” that speak to the wartime President’s life, is also ringed with cherry trees.  Knowledgeable guides are attuned to the rhythm of their riders on the relatively flat route, be they kids on small bikes and tandems or parents determined to keep up.  Old Post Office Pavilion, 12th Street at Pennsylvania Avenue  (202) 842-2453; bikethesites.com  Blossoms by Bike is offered three times daily during the festival and it’s best to book well in advance. 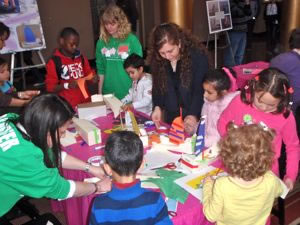 Family day at the National Building Museum launches the festival’s first weekend and it’s kids who will get a kick out of the many arts/crafts tables where they can build junk (boats) or cobble together spring windsocks and mini-diamond kites.  There’s origami, official merchandise (most of it in festival shades of pink and green) and a large stage featuring music and dance performances.  A kite festival takes over for another day of fun and the wind-powered revels unfold around the Washington Monument.  The Southwest Waterfront Fireworks Festival and Cherry Blast III, a multi-media party with deejays, performance artists and other sensory experiences, highlight the second weekend of the festival while the National Cherry Blossom Festival parade, featuring lavish floats, marching bands and ever more flower power, closes out the final weekend.  Additional information and a calendar of events can be found at nationalcherryblossomfestival.org  The festival is scheduled over a two-week period from late March-early April and those planning to attend the centennial festival in 2012 should book air/hotel well ahead.  Most festival events are free of charge. 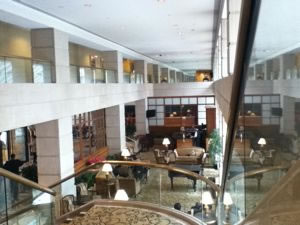 Where to stay:  The Fairmont Hotel at the edge of Georgetown is a short Metro ride from festival events yet far enough away to prove an oasis in our nation’s capital.  An expansive, glass-walled lobby features a pianist nightly and rooms are accented in green and gold tones which are the grace note to a cosseting bed and rich furnishings.  Members of the Fairmont President’s Club (sign up online and it’s free) will receive complimentary coffee service, daily newspaper, free wi-fi and access to a 17,000 square foot health club that includes every imaginable piece of workout equipment alongside a lap pool and sauna, steam and whirlpool.  A walk along nearby M Street is filled with shopping and dining possibilities and the hotel’s gracious staff takes care of everything else.  Can you say Eloise at the Fairmont?  2401 M Street, N.W.  (202) 429.2400; fairmont.com/washington.  The hotel’s Cherry Blossom Package includes overnight accommodations, valet parking and a box of note cards featuring Cherry Blossom scenes by acclaimed photographer Jake McGuire; rates start at $229/night. 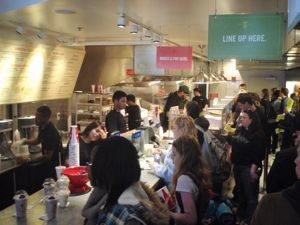 Where to eat:  Good Stuff Eatery is the fancy of wunder-chef Spike Mendelson, who eschews assembly-line burgers in favor of hand-crafted burgers, hand-cut fries and made-right-now shakes.  A conga line of hungry diners works its way through the narrow restaurant to order the likes of Spike’s Sunnyside (cheese, Applewood bacon and a farm-fresh egg astride a hand-formed patty) or the Prez Obama (Applewood bacon, onion marmalade, Roquefort and horseradish mayo – who knew?).  Chow down at a slew of functional tables or outside in good weather.  Chef Mendelson is obviously modest since this place should be called Great Stuff.  303 Pennsylvania Avenue, S.E.  (202) 543-8222; goodstuffeatery.com  Tackle Box is a fish shack conceived at the shore (or so it appears) and plunked down in the heart of Georgetown.  Denizens of the district, as well as visitors, are the lucky ones since the seafood, either “wood-planked” or “crispy,” sparkles.  A platter of fried scallops, sweet potato fries and hand-cut fries hits every mark though the haddock fish and chips and wood-planked bluefish are more good choices.  End your meal with a slice of blueberry pie.  3245 M Street, N.W.  (202) 337-8269; tackleboxrestaurant.com  Teaism started out as a contemplative tea-and-sweets shop and has morphed into a full-on restaurant serving everything from bento boxes to buffalo burgers.  The accent is on fresh, healthy fare and, believe it or not, kids will find something to their liking.  404 8th Street, N.W.  (202) 638-6010; teaism.com  Other locations near Lafayette Park and Dupont Circle.  Fun for the fam is at hand at Pitango Gelato, a haven for creamy, dreamy ice cream and the folks who can’t (won’t?) live without it.  Three stars if you can decide between Chocolate Noir, Chocolate Hazelnut and Spicy Chocolate flavors.  413 7th Street, N.W.  (202) 885-9607; pitangogelato.com  Additional locations in the District of Columbia, Maryland and Virginia. 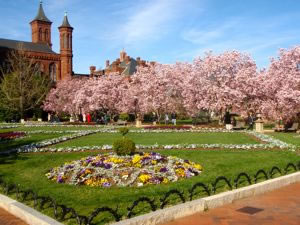 What else?  The Enid A. Haupt Garden spans four acres behind the Smithsonian Castle and is awash in color in the springtime.  Wander its brick paths or take in the view from a cozy bench and expect to see the magnolias in bloom during the festival.  1050 Independence Avenue, S.W.  The Chester Dale Collection at the National Gallery of Art takes the floral motif indoors, seeing as how many of the Impressionist works feature flowers and scenes of the outdoors.  4th and Constitution Avenue, N.W.  (202) 737-4215; nga.gov