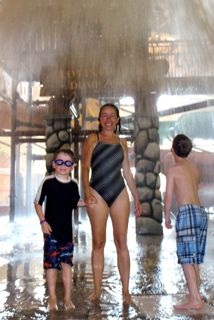 We arrive at Great Wolf Lodge just outside of Charlotte, North Carolina on a sunny July afternoon.  The Lodge has 402 guest suites and it is these guests alone who are entitled to use the 80,000 square foot indoor water park at the heart of the resort.  Steven wastes no time in getting his swim trunks on and spirits us away to the waves, make that cascades, of water that sweep over the cavernous water park.  First stop is Fort Mackenzie, a four-story water fort that is in keeping with the resorts’ Northwoods theme.  We man water cannons and spray unsuspecting souls (trappers?) below and get plenty wet ourselves thanks to jets spraying in every direction.  On reaching the top, Steven and I race each other down on dueling water slides.  Finally, it’s a race to the space at the front of the fort, which will soon be doused by a thousand-gallon water bucket perched atop this super-soaking structure.  A bell clangs and within seconds, a torrent of water thunders over us.  Steven looks at me and says what he always says at times like this:  “Wow, that was great!  Let’s do it again!!”

We work our way through water slides with names like River Canyon Run and Howlin’ Tornado (the latter a consensus favorite) and, hunger calling, make our way to the Loose Moose Cottage for its dinner buffet.  I pair a thick, dewy slice of prime rib with a sweet potato casserole that is the song of the South.  My perfectly-cooked green beans are tossed with meaty mushrooms and it suddenly occurs to me that I’m having Thanksgiving dinner in the middle of July.  This notion is reinforced on seeing Steven and Fen dig into plump slices of turkey breast soaked in chicken gravy.  Whoever is doing the cooking at Great Wolf is ready for prime time, not that they’d ever want to leave the Northwoods. 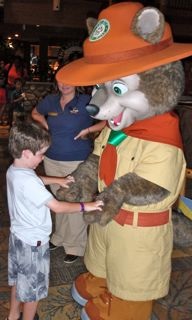 Bellies full, we make it to the cathedral-ceilinged lobby just in time for the nightly magic show.  Over the course of 45 minutes, a young magician pulls every trick in the book (bag?), ending with the aww-inspiring furry rabbit.  The bunny is the perfect lead-in for the Clock Tower show, a collection of animatronic animals singing about nature and the woods and how “there’s nothing to be scared of.”  Half of the kids on hand have turned out in p.j.’s and eagerly await the story time that follows.  The story may be lovely but the crowd is really here to meet Wiley Wolf, resident mascot and bundle o’fun.  Story over, each and every kid gives Wiley a “high paw,” a high five of sorts that transports them to a paw-fect night’s sleep. 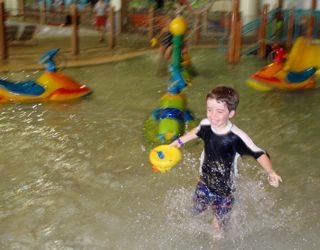 I’ve signed Steven up for Jr. Lifeguard training at the Cub Club, an activity center running the gamut from arts and crafts (tie-dye, painting) to nature explorations.  The Ambassador of Fun starts off with a short video on the lifeguard’s role and follows it with a quiz to see how much the participants know about the guard process.  Next up is a race between Jr. Lifeguards and their parents where everyone saddles up with shorts, tee, guard pack, visor and rescue tube and competes to see who can run an obstacle course the fastest.  Naturally, the kids win – and gloat – and winners and losers move on to the water park, where the Juniors meet and compete against real lifeguards in securing rubber duckies in their team colors that spell out RESCUE.  Yet again, the junior crew emerges victorious and embarks on its final challenge, individual races against a lifeguard down the Fort Mackenzie slides.  Kid after kid gets to the bottom of the slide first, eliciting the “Wolf Cheer” from the whole of Great Wolf’s lifeguarding crew. Back at the Cub Club, beaming children are presented a Certificate of Completion for the Jr. Lifeguard class. 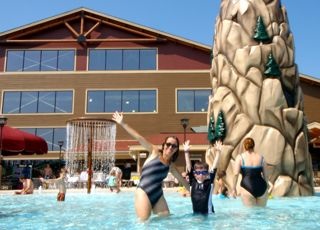 Not every visitor to Great Wolf aspires to be a lifeguard, which is why the resort has created an array of activities sure to please.  At gr8_space, teens are invited to chill out in a techno-haven replete with safe Internet stations, movies, music and a deejay.  The Northern Lights Arcade is filled with mechanical bling set atop the coolest carpet ever and Scooops is the place where adorable girls get even cuter thanks to mani, pedi and facial options.  Easily the biggest draw is MagiQuest, an interactive scavenger hunt that is a cross between Harry Potter and Lord of the Rings.  Players are outfitted with a magic wand and instructions and the rest is up to them and if they’re not sure which way is up, well, they can check their score on the in-suite TV at the end of the day.  The only thing more popular at Great Wolf than MagiQuest is water. 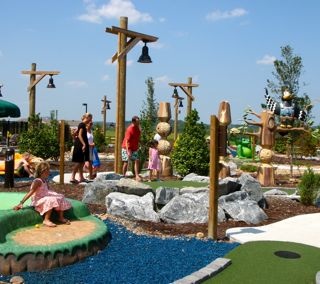 My husband, Fen, and I are fond of playing miniature golf or croquet with margarita in hand, something we can usually get away with at a resort property.  On spotting the Bacardi Mojito Cart at Great Wolf, Fen wastes no time in ordering two mojitos and leading Steven and me to the Howl In One Mini Golf course.  The eighteen holes are adjacent to the resort’s outdoor pool and a cacophony of color, form and fun framed by the verdant hills of North Carolina.  Fen completes his round with a succession of strong putts, I ask for countless mulligans and Steven is noble for indulging his parents in a tradition that began long before he was born. 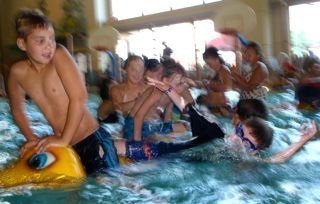 The Chinook Cove Activity Pool may not offer the full-on rush of many of the water park’s slides but it has other worthy amusements.  Chief among them is the snake, a maybe twenty-five-foot long, super-slippery/slithery float toy that kids continually climb on – and fall off.  Steven, like many of the other alpha-kids, wants to be near the head of the snake, the better to hang on and, well, be king of the world.  The laughter and camaraderie between kids who were strangers one minute and are now fast friends is infectious.  Why other resorts haven’t seized on this pleasing prop is beyond me. 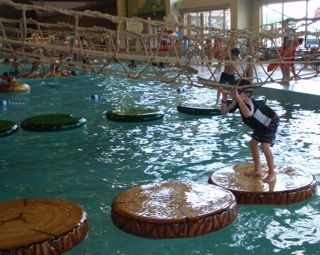 At the other end of Chinook Cove is Big Foot Pass, which Steven has been eying warily since our arrival.  Here, each child is expected to hop, skip or jump on and over a series of lily pads that are as slippery as the snake.  One false step and...splash!  You’re all wet.  That said, there is rope netting overhead and most kids avail themselves of this aid.  I cajole my son into giving it a go and he finally does, stepping atop the first lily pad and then clambering aboard pad #2.  Holding my breath, I watch him stretch for the third pad and plop, my young son is in the water.  I make eye contact with the lifeguard, willing him not to blow his whistle and call my kid out.  Luckily, he gets the message and we both watch in amazement as Steven somehow manages to hoist himself onto a lily pad three times his size while treading water.  Taking a firmer grasp of the netting, my boy collects himself and makes it to pads four and five.  With him safely on the other side, I cheer my son wildly, completely oblivious to the gathering crowd.  Yep, Steven is king of the world once again. 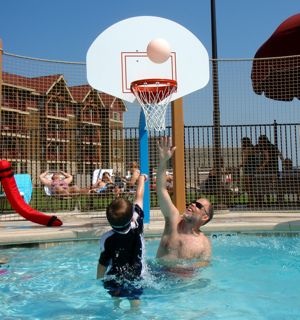 The premise behind an indoor water park is that you are not subject to the vagaries of weather, be they rain, snow, excessive heat or toe-numbing cold.  The folks at Great Wolf are hep to this and have set about building a corps of lodges and water parks across North America that insulate us from the wrath of Mother Nature.  A brilliant idea, no doubt, but on our visit, I can’t get enough of the outdoor experience.  The skies outside are perpetually blue and visited by the occasional puffy cloud.  When a soft breeze does blow, it’s warm and soothing.  Steven, Fen and I love playing at the shallow pool’s basketball hoops, with Steven mastering his jump shot like never before.  Calling the occasional time out, I retreat to a chaise longue for a sip of iced tea and my guilty-pleasure fashion magazine.  All is right with the world, or at least that corner of the world known as Great Wolf Lodge.

Additional information on Great Wolf Lodge can be found at greatwolf.com.  The company has twelve resorts located throughout the United States and Canada.

Elaine Sosa Labalme is a food and travel writer based in Pittsburgh, PA . When she's not busy as a domestic goddess she's out traveling with husband Fen and seven-year-old son Steven. She hopes to be the next Charles Kuralt.