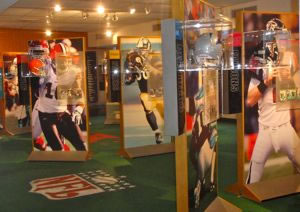 If you've ever wondered why the Pro Football Hall of Fame is located in Canton, Ohio, well, here's your answer.  Legendary Olympian and pro footballer Jim Thorpe played for the Canton Bulldogs in 1915 and the team was an early pro football powerhouse.  Consequently, the mecca of all things football is housed where it all began.  Located just off I-77, the Hall sprawls under a soaring dome shaped like a football.  Opened in 1963, the facility has benefited from two expansions which have greatly added to, and modernized, the space and made for a more interactive experience.  A third, major renovation and expansion will soon be underway and is scheduled for completion in 2013, the Hall of Fame's 50th anniversary.

A walk down memory lane brings you face-to-face with the oldest football, a piece of leather as well-worn as the oldest helmet sitting next to it.  You can relive the earliest days of the game via assorted memorabilia but the real fun starts at the AFL/NFL wars of the 1960s, when dueling leagues were vying for supremacy.  Thankfully, the leagues merged in 1966 and everyone got to play nice – sort of.  Game clips, both audio and visual (the voice recording of former Viking Jim Marshall running the wrong way for a touchdown is priceless), help young fans relive an experience only their parents or grandparents can recall.

The Teams of the NFL gallery is a collection of helmets from all 30 teams with a description of each franchise and kids will delight in choosing their favorites.  Bronze busts of players elected to the Hall fill an adjacent, dramatically-lit space and once again, parents and kids will circle the room in search of their heroes.  Touch screens that allow you to research inductees by name, team, position or year are an added plus.  “Moments, Memories and Mementos” is the place for signed “record” footballs (Lofton, Marino, Unitas) and other special items (Paul Brown's fedora inspires an “ooh” from just about everyone).  Video highlights are once again special and a gaze at George Halas' firm jaw might be worth the price of admission. 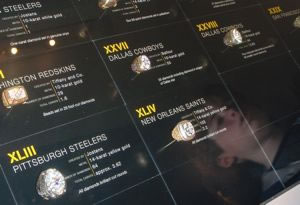 The Pro Football Today gallery brings the experience home for kids, since it's where they'll find today's heroes (Brady, Manning) and a hilarious film with coaches and players complaining about calls, weather, everything as they get pumped for a game.  The Lamar Hunt Super Bowl Gallery offers an exhaustive look into all 45 winners and leads to the Super Bowl Theater, an in-the-round space where you'll relive the most recent Super Bowl game.  Eye-popping treat for kids?  Refrigerator Perry's size 23 Super Bowl ring.  “Is that gold, Mom?” squealed my nine-year-old son.  “I want it!”  Last but not least is a glass case showcasing the Super Bowl ring of every winning team and these baubles have definitely gotten bigger over time.  The Hall's curators have wisely installed a large touch screen at the end of the exhibit where kids can design their own Super bowl ring.

While a visit to the Pro Football of Fame is sure to delight rabid fans, even more surprising is how it instills an appreciation for the game among the casual fan.  It's hard not to admire the efforts of those who have played a rugged game at the highest level for nearly a century.  The Pro Football Hall of Fame is located in Canton, Ohio and open daily except Christmas Day; extended hours from Memorial Day to Labor Day.  profootballhof.com 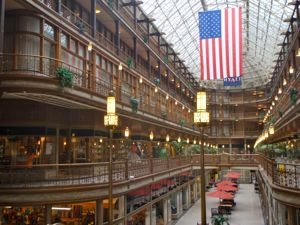 Where to stay:  The Hyatt Regency Cleveland is a quick hour's drive from the Hall of Fame and puts you in the heart of a busy metropolis.  Rooms encircle a gilded arcade that's a Belle Epoque fantasy yet are awash in modern-day comforts including flat-screen TVs and duvet-covered beds.  An Arcade Deluxe gives kids room to roam and they will surely find their way to the Chocolate Bar at ground level, home to an array of tantalizing desserts (but not before mom makes her way to the Arcade's Marengo Luxury Spa).  Across the way is the E. Fourth Street dining corridor that includes Greenhouse Tavern, Ohio's first certified green restaurant, and the Corner Alley, where bowling pins are racked up nightly.  420 East Superior Avenue  (216) 575-1234; cleveland.hyatt.com.  Doubles from $149. 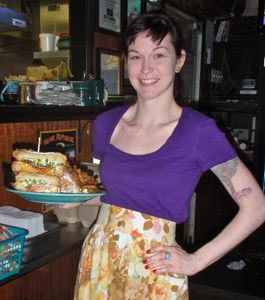 Where to eat:  No trip to Cleveland is complete without a visit to Melt, a mashup of gourmet grilled cheese sandwiches and 100+ beers.  Think footballer-sized sandwiches like The Dude Abides, a medley of meatballs, fried mozzarella sticks and marinara sauce snug between two hunks of bread and even more cheese.  Our son has always favored The Kindergarten, a basic grilled cheese sandwich, but on this visit he added bacon, avocado and grilled onions and pronounced it The Third Grader.  The wait at either location can be long so plan an off-hours visit.  14718 Detroit Avenue  (216) 226-3699; meltbarandgrilled.com  Second location in Cleveland Heights, with a third opening in Independence Fall 2011.  Breakfast at the West Side Market Cafe is another Cleveland must and the eggs, home fries and toast for $3.25 will leave enough change in your pocket for snacks at the adjacent West Side Market, a food hall that's been around longer than the NFL.  1995 W. 25th Street  (216) 579-6800.  westsidemarketcafe.com 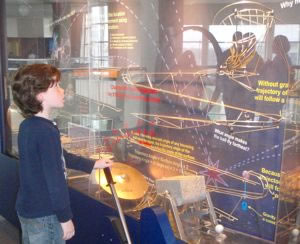 What else?  The Great Lakes Science Center is filled with educational attractions that will engross kids for hours but the real gift are the special exhibits and IMAX films.  Purchase an add-on ticket and take in “Facing Mars,” a tutorial on the red planet filled with interactivity and asking the burning question “would YOU go to Mars?”  The answer from most visitors is no.  At the IMAX, enter “Tornado Alley,” where filmmaker Sean Casey of the hugely-popular “Stormchasers” TV series comes face-to-face with cyclonic winds and documents them to within an inch of his life.  601 Erieside Avenue  (216) 574-6262.  glsc.org