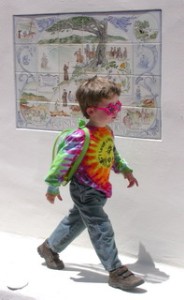 The coastal city of Monterey, California, about a two-hour drive south of San Francisco, was settled by Spain, claimed by Mexico and seized by the U.S. Good thing everyone finally called it a day and went fishing. Fast forward a couple hundred years and it’s still all about fish and water in Monterey. With nearly a hundred miles of coastline in Monterey County alone, there are ample outdoor enticements for both parents and kids. Back inside, the wonders of Monterey Bay are stunningly spotlighted in the city’s world-class aquarium. Pack the car and sun block and get ready for an actively good time.

The Big Kahuna. A giant kelp forest greets you as you enter the Monterey Bay Aquarium, its gangly tentacles reaching for the sky inside a stories-high glass tank. Pink and blue and orange fish weave their way throughout the yellow-green kelp, pausing to – can it be? – smile at the gawkers outside. And then it hits you: this looks just like “Finding Nemo!” Only here, the fish are real and the experience, like the movie, is mesmerizing. Celebrating its 20th anniversary in 2005, the Monterey Bay Aquarium is an ode to the sea, a place where fabulous fish frolic in themed galleries and enlighten the masses. The “Ocean’s Edge” wing is an update of many of the aquarium’s original exhibits and features playful sea otters, an octopus’ den and touch pools filled with crabs, sea stars and more. The requisite shark tank features some pretty serious fish and is nowhere near as amusing as the circular tank showcasing thousands of slivery, silvery sardines swimming in formation. Rating biggest with little kids, however, is a glass-walled alcove where a wave crashes overhead once a minute. If hunger strikes, head for the aquarium’s Portola Restaurant, where fish (ouch!) is featured. 886 Cannery Row, Monterey (831) 648-4800; mbayaq.org. 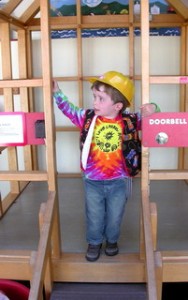 Hidden Treasure. Tucked away on the third floor of a Cannery Row building is the Monterey County Youth Museum, or “MY Museum” for short. What the museum lacks in space it more than makes up for in charm, with a collection of fun-filled exhibits designed to educate during the course of play. The Creation Station features bin upon bin of arts and crafts material waiting to be turned into works of art while Body Works and Pet Vet will appeal to the caregiver side of your kid. At Build a House, an exposed beam structure invites kids to fill in the bricks, literally, and do a little plumbing on the side. If you lose your child here, they’re probably stuck to the giant magnet table whereas many a dad will be found “shooting” hoops nearby on a see-saw-like contraption. Possibly the best exhibit is MY Pizzeria, a small-scale yet full-service pizzeria where junior can “bake” his favorite pie and serve it in style. Many local businesses have sponsored exhibits at MY Museum, giving them a touch of realism kids will truly appreciate. The museum will move to larger downtown quarters (and add numerous exhibits) in winter 2006. 601 Wave Street, Suite 100, Monterey (831) 649-6444; mymuseum.org. 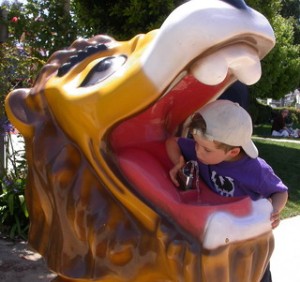 Back Outside. A number of Monterey’s better-known attractions are an easy walk from the downtown area and can be visited in one day. Old adobes such as the Custom House comprise the Monterey State Historic Park and can be found by following the yellow-tiled “Path of History” icons that are imbedded in the city-center sidewalk. Let your feet lead you to Fisherman’s Wharf next, where seafood joints and gift shops vie for your attention with the sea lions and otters frolicking in the waters below. The catch of the day is hauled in at nearby Wharf 2 and countless pleasure boats are docked just beyond, making for an appealing aquatic tableau. If hunger strikes, stop for some tasty fish ‘n chips at the indoor/outdoor Captain Gig’s – just be sure to shield your catch from predatory seagulls! Work off your lunch on the city’s Recreation Trail, an 18-mile stretch of pavement that hugs the coastline and provides countless picture-perfect views. And work it off you will, since motorized transport is expressly forbidden on the wide expanse. Bicycles and family-friendly surreys are available for rent all along the trail. A nice stopping off point (and less than a mile from Fisherman’s Wharf) is Cannery Row, immortalized by John Steinbeck in his book of the same name. While the sardine-packing industry that gave life to this strip is long gone, the old warehouses still pack a sentimental punch despite the tourist kitsch. From here, flag a passing trolley and hop on board for a free ride back to the downtown area. A short car ride away is the Dennis the Menace Playground, created by cartoonist Hank Ketcham in 1956 as a place where kids could (and should) be kids. Let the kids get their ya-ya’s out on the many jumping, climbing and sliding structures, pausing for a cool sip of water at the oversized lion’s head water fountain. More water is right across the way at U-shaped Lake El Estero, where renting a paddleboat will provide a serious workout for parents and lots of laughs for everyone. Leisure-minded families might skip the playground in favor of a whale-watching cruise on Monterey Bay, although the three-hour excursion might prove a bit taxing for little kids. Bringing out the kid in everyone, however, is an hour or two of kite flying at Marina State Beach, a ten-minute drive from downtown Monterey. The beach’s immense sand dunes will prove irresistible to intrepid climbers. Finally, any journey into or out of Monterey demands a stop at the organic Swanton Berry Farm in tiny Davenport, Calif., less than an hour north of Monterey. The state’s original organic berry farm has a u-pick field that’s open during the summer months while the farm stand, filled with delectable berry treats, is open well into the fall. Eat, pick and be merry. 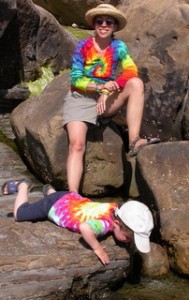 The Great Outdoors. Blissfully free of buildings new or old is Big Sur, a stretch of rocky coastline about an hour south of Monterey. Old-growth forests and rolling hills hold sway here and invite you to breathe in the fresh air as you reconnect with nature. At Pfeiffer-Big Sur State Park, you can choose one of many family-friendly trails for an easy half-day hike. An excellent choice is the Pfeiffer Falls-Valley View trail, a two-mile loop that will lead you to the base of an idyllic waterfall. Pack a snack and plan on stopping at the top for a while. Andrew Molera State Park, a few miles north of Pfeiffer-Big Sur, is another good choice for day hikes (ask the rangers for suggestions), and the $8 entrance fee paid at one park will get you into any other California State Park on the same day. Stop for lunch at Nepenthe, an iconic Big Sur restaurant known for its views over its food. While the vista of the Pacific is indeed stunning, the $15 tab for a burger might be a little harder to swallow. A drink on the terrace could be a more palatable option. 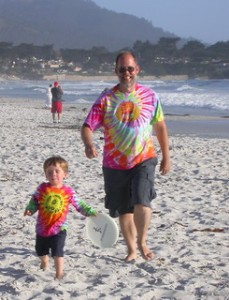 Continuing north later in the day, pay a visit to Point Lobos State Reserve for some tidepooling. The park entrance fee paid earlier in the day also gets you in here and your kids will thrill to the sight of scampering hermit crabs in clear, coastal pools. Your last stop will be quaint Carmel, California, where art galleries, high-end boutiques and chic restaurants clutter (some might say contribute to) the landscape. Grab a hot chocolate at the Carmel Valley Roasting Company on Ocean Avenue and take it down to Carmel Beach, the real reason you’re here. The soft white sand of this ample expanse makes it one of the best beaches in Northern California. Ten points if you pack a frisbee and ten more if you last till sunset. 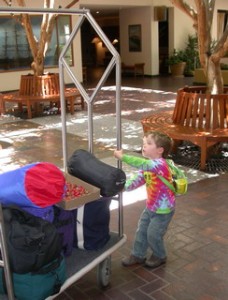 Where to Stay. The Portola Plaza Hotel is an airy lodging with a dual identity. Look out its front doors and you’re in the heart of downtown and steps away from the Monterey Conference Center. Exit out the back and you’re on the Path of History and overlooking Fisherman’s Wharf. The light-filled atrium lobby feels fresh and inviting, much like the hotel’s 370 rooms, recently redone in soothing beige tones. Request a bay view king and engage in a dual identity of your own, alternating between the pillow-top-mattress bed and the balcony’s unbeatable view. Attentive service completes the experience. Cribs and rollaway beds are available on request; plunge pool and full-service spa located downstairs. Two Portola Plaza, Monterey (831) 649-4511; portolaplazahotel.com.

Where to eat. It’s all about fish in Monterey, so leave those meat-eating leanings back home and get ready to swim with the locals. At Monterey’s Fish House, it’s locals you’ll see enjoying the fresh catch of the day prepared to order but all comers will feel welcome. The service is brisk yet pleasant and they’re happy to cater to your children’s whims. 2114 Del Monte Avenue, Monterey (831) 373-4647. For a guaranteed good time, head over to Bubba Gump Shrimp Co. Part of a small chain that has gone remarkably far on one movie, the restaurant is crowded, colorful and blessed with young, energetic servers who get a kick out of stumping you with “Forrest Gump” trivia. The fried calamari appetizer that tastes so fresh IS so fresh because the boats right outside your window are fishing for squid at that very moment. Dishes such as fried shrimp and crab-stuffed shrimp are artery clogging fare but delicious nonetheless. 720 Cannery Row, Monterey (831) 373-1884; bubbagump.com. The Portola Restaurant at the Monterey Bay Aquarium is a white-tablecloth restaurant where binoculars have been placed on each table to occupy kids between courses. It’s refined cookery here as evidenced in the achiote-marinated mahi-mahi and five-spice-seared big-eye tuna. Kids can order fish and chips or a grilled cheese sandwich and feel as big as they want. 886 Cannery Row, Monterey (831) 648-4800; mbayaq.org. Rosine’s in downtown Monterey serves up standard American fare in ample portions. You’ve got to save room for dessert, though, since the restaurant is famous for its foot-tall cakes. 434 Alvarado Street, Monterey (831) 375-1400. Casanova in Carmel is a chic Euro-bistro where a three-course prix fixe dinner can be enjoyed indoors or on the cozy heated patio. 5th and Mission, Carmel (831) 625-050; casanovarestaurant.com.

Rent bicycles, surreys or kayaks from Adventures by the Sea, Cannery Row (831) 372-1807; adventuresbythesea.com.

Information on California State Parks can be found at parks.ca.gov.

Elaine Sosa is a food and travel writer based in San Francisco, California. When she's not busy as a domestic goddess she's out traveling with husband Fen and three-year-old son Steven. She hopes to be the next Charles Kuralt.