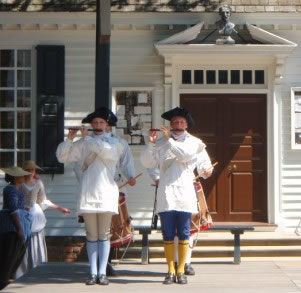 Colonial Williamsburg is a living history museum that parents will find fascinating but, let’s face it, most kids can take history in limited doses.  That said, the Colonial Williamsburg Foundation has done a masterful job of creating interactive children’s programming to keep young ones engaged.  The other variable on your visit?  Heat.  It’s darn hot in this part of the South and the most extensive and compelling programs are scheduled during the summer months.  Factor in frequent rest stops and a late-afternoon visit to the hotel pool to keep everyone refreshed. 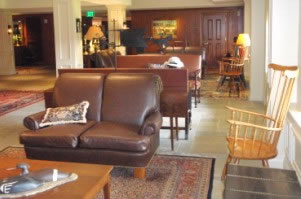 Where to stay:  The Williamsburg Lodge harkens to early America and is the beneficiary of a recent multi-million-dollar renovation.  Ample folk art mixes with sink-into-me leather couches in the spacious lobby and that comforting feeling extends to your room, where pencil-post beds blend seamlessly with wing chairs and easygoing rockers.  Clean lines are evident in the black-and-white bathroom and a dark wood armoire hiding a flat-screen TV.  Guests of the Lodge have privileges at The Spa of Colonial Williamsburg across the street and the complex features indoor, outdoor and adult pools, a well-equipped fitness center and exercise classes galore.  310 South England Street  (757) 253 2277. Doubles with two queen beds from $169. colonialwilliamsburg.com 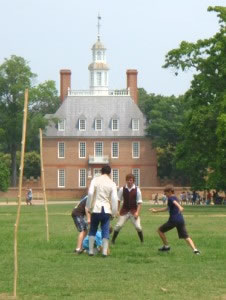 Begin day one with a stop at the Visitor Center for the 30-minute film, “The Story of a Patriot.”  A recounting of events leading up to the Revolutionary War and independence, the decades-old film has been restored and does a fine job of setting the table for what you’ll see next.  Grab a shuttle to Duke of Gloucester Street, Colonial Williamsburg’s grand boulevard, and pull out the RevQuest: Sign of the Rhinoceros packet handed to you at hotel check-in.  RevQuest: Sign of the Rhinoceros is a new interactive game which tasks kids with solving a riddle that threatens the revolution and its leaders.  Part scavenger hunt, part puzzle, children and their parents slip back into time with a purpose, though a modern-day convenience, a text-capable cell phone, is needed to text and receive clues.  The game has three discrete sections and you can complete the quest throughout the day or throughout your stay. 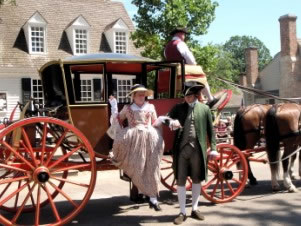 Make your way to Revolutionary City at the eastern end of Duke of Gloucester Street, where costumed interpreters perform a series of set pieces every morning.  The theme on our first day is “Building a Nation” and we witness a young slave decry the hypocrisy of slavery:  “They want freedom from England so why won’t they give it to us?”  We then welcome the arrival of Lady Washington, and the first spouse laments the difficulty of travel for ladies of the era.  Lunch is at one of Colonial Williamsburg’s taverns, true-to-the-era dining halls.  At The King’s Arms, the “midday bill of fare” includes a creamy peanut soup, East India Company Fried Chicken and Norfolk Pottage Pye.  A guitarist strolls among the tables and breaks into song and is easily the highlight. 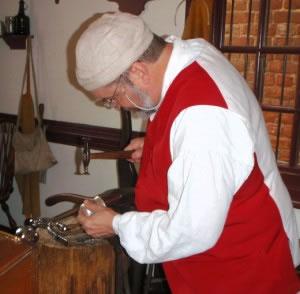 Spend the afternoon interacting with Colonial Williamsburg’s many artisans and tradesmen, costumed interpreters who have spent a considerable amount of time learning a craft.  Kids will appreciate these visits even more if you pick up a Kids Adventure Map from a costumed greeter at any storefront.  The greeter will ask easy questions of your child after their visit and if the answers are good, they’ll punch their list.  Get enough punches and you earn a souvenir pin.  Tops on our list are the silversmith, apothecary, wigmaker, weaver and gunsmith.  Another must is the DeWitt Wallace Decorative Arts Museum and Abby Aldrich Rockefeller Folk Art Museum.  Housed in the same building, the museums offer several themed tours daily and end with a family-friendly activity.  While the DeWitt Wallace focuses on decorative arts and has extensive collections of silver, pewter, clothing and furniture, the Folk Art museum will be more appealing to children thanks to a collection that includes fantastical fiddles, whirligigs and Dentzel carousel animals circa 1906.  “A Grand Medley of Entertainments,” otherwise known as Colonial-era slapstick, is on tap for the evening and kids will laugh themselves silly. 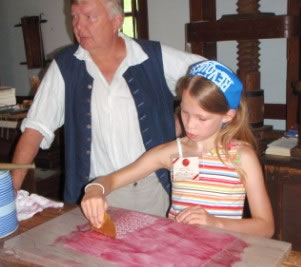 Day two kicks off with an Apprentice Tour and you’ll visit three shops so kids can figure out what they want to be when they grow up.  Hands-on activities are scheduled at each stop and if the printing office is on tap, your child will exit with an exquisite creation.  It’s then back to Revolutionary City, where “The King’s Government Collapses” and news of the battles of Lexington and Concord arrives on horseback.  Costumed interpreters mingle easily with visitors and discuss the probability of war and peace.  Lessons from a fencing master about swordplay and then some are delivered to a young recruit. 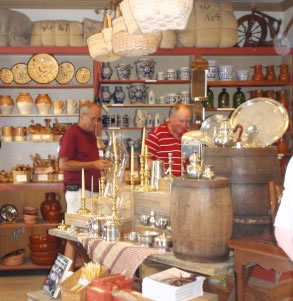 Pay a visit to the Colonial Garden, filled with blooming plants on display and for sale, on your way to the Museum Cafe, where lunch is both nutritious and delicious and the temps are pleasingly cool.  Shopping is the order of the afternoon and the shops along Duke of Gloucester Street are stocked with the wares of Colonial Williamsburg’s artisans and craftsmen.  The Prentis Store is arguably the best of the lot (the quill pen and ink sets will prove irresistible to kids) while Tarpley’s and Greenhow are also worth your while.  The Wythe House is one of 88 original buildings in Colonial Williamsburg and dates to the 1750s and as you walk its neat wood floors, you will retrace the steps of George Washington and Thomas Jefferson.  A Multi-day Ticket to Colonial Williamsburg is your best bet while a Bounce Ticket includes visits to Water Country USA and Busch Gardens. colonialwilliamsburg.com  Evening programs and the Apprentice Tour require an additional fee. 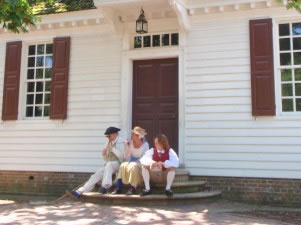 Where to eat:  The Lodge Restaurant is Colonial Williamsburg’s newest dining destination and counts among its staff a chef trained at the Culinary Institute of America (CIA) and interns from the nation’s premier culinary school.  The American cuisine with Southern and Chesapeake influences is best savored via a three-course prix fixe menu that may begin with an heirloom tomato gazpacho flecked with jalapeno and crème fraiche and segue to BBQ baby back ribs served alongside Asian cucumber slaw and a garden risotto.  Sweet corn madeleines with a peach puree and sweet basil ice cream are the grace note to a stellar meal.  The room is comfortable without being pretentious and while the children’s menu is more appealing than most, the regular menu is accessible to all ages.  Mornings promise a delicious breakfast.  The taverns of Colonial Williamsburg include the aforementioned King’s Arms as well as Chowning’s Tavern and Christiana Campbell’s Tavern and feature food and drink typical of early American dining establishments.  A pleasant mood and lively music add to the experience.  The Bakery, on Duke of Gloucester Street, is the go-to spot for delicious baked goods and cooling beverages all day long while Retro’s, near Merchants Square, serves excellent frozen custard.  Info on restaurants except Retro’s at colonialwilliamsburg.com; reservations strongly suggested at all except the Bakery.  Retro’s:  retrosgoodeats.com 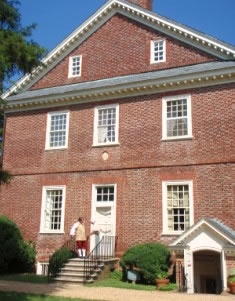 What else?  Seek out the Berkeley Plantation on the banks of the James River, about an hour west of Colonial Williamsburg.  The ancestral home of the Harrisons (Presidents William Henry and Benjamin) is a three-story brick Georgian mansion whose walls are 36” thick, the better to keep cool in the summer, warm in the winter and ward off Indians and highwaymen year round.  Bourbon was founded and “Taps” composed on the premises and the décor is nothing if not eclectic, a melange of brightly colored walls and wallpaper and whimsical furnishings that no doubt found favor with the many presidents who came a-calling.  “The deeper the man’s pockets, the taller the ceilings,” coos Beth, the engaging tour guide who addresses children as “sugar” and “sir.”  12602 Harrison Landing Road, Charles City, VA  (804) 829-6018  berkeleyplantation.com … Both Water Country USA and Busch Gardens are less than thirty minutes from Colonial Williamsburg.  Have the kids earned a visit?  Absolutely!  Visit watercountryusa.com or buschgardens.com/bgw for more information.