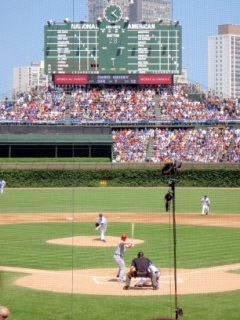 Everything old is new again?  You could certainly say that about Wrigley Field, one of a handful of ballparks across America that looks old because it actually IS old, dating to 1914.  In an era of shiny new/retro feel ballparks, taking in a game at a classic ball yard has special meaning.

It all begins as you exit the Red Line train at Addison Station.  Hawkers sell peanuts, ball caps and cold drinks in the two blocks leading up to the stadium, a compact edifice thronged with fans both inside and out on game days.  The field boxes behind home plate are the ideal perch from which to take in the game and view the thicket of ivy on the outfield wall for which the ballpark is known.  An organ plays in an effort to rev up the fans and before you know it, announcer Paul Friedman booms “And now it’s time to PLAY BALL!”

The Cubs have been playing at Wrigley Field for nearly a century and are a rite of summer for Chicagoans and baseball fans the world over.  Win or lose, the team is always competitive and the excitement of a home run or a play at the plate is but one batter away.  Balls and strikes are noted on an old-fashioned scoreboard that features a minimum of LEDs and spectators scattered on rooftops in the distance yet peering in are another part of the experience. 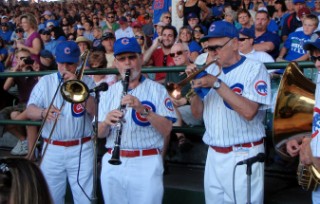 The fans are one united base as seen in a sea of royal blue tees.  The signature Cubs “C” over the heart could be the most popular tee but it’s safe to say the team has an amazing variety of t-shirts for sale, all of them good-looking.  That almost every seat is taken on a Friday afternoon in the summer is no surprise, since the team regularly sells out its 40,000+ seats.

What will your kids enjoy the most about their visit to Wrigley?  The little things.  Gawk at the assortment of food vendors selling everything from bratwurst to peanuts and pizza.  Gift shops are bursting with souvenirs and even the smallest Cubs item will delight a child.  Finally, look at the people.  Most of them are excited to be here and for many, it’s a pilgrimage for which they’ve been waiting a lifetime.  Smile back – you’re lucky to be here, too.  The Chicago Cubs play at Wrigley Field from April-October.  Tickets can be purchased online at cubs.mlb.com

Pay a visit to the Shedd Aquarium before the game and check out “Fantasea,” a new multi-media show that thoughtfully incorporates sea otters, penguins, dolphins and beluga whales.  The Abbott Oceanarium has been updated and includes winning interactive exhibits such as “Be A Penguin” that come with the requisite penguin suit!  sheddaquarium.org