The craft beer renaissance has spawned a myriad of ancillary beer businesses and products such as beer books, beer videos, beer Web sites and beer CD-ROMs. While craft beer Web sites and the Internet seem to have paralleled one another in growth in recent years, the techno-side of the microbrew industry has spawned only a handful of CD-ROMs. Here is a review of the five beer-related CD-ROMs that have been widely marketed in the United States. 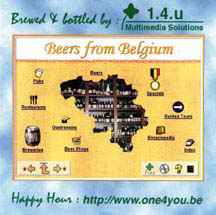 Follow a guided tour through the Trappist monasteries of Belgium or the valley of the Zenne River. Learn more about the important role of beer in Belgian gastronomy. Prepare one of more than 100 typical Belgian food recipes made with beer. Discover through more than 1,400 pictures and 3,000 hyperlinks the rich Belgian beer culture. You can do all this and more with the fabulous Beers from Belgium CD-ROM.

Beers from Belgium is loosely based on Peter Crombecq's Bier Jaarboek, which lists all the Belgian breweries and the beers they produce as well as some of Belgium's better bars and beer shops.

You could spend hours hopping from beer to brewery and back again with this CD-ROM, which makes the most of quick and useful cross-referencing. It not only offers photos and details of breweries and their beers, but also flavor profiles, a short history of each brewery, map locators, yearly output figures, addresses, phone and fax numbers and more.

Beers from Belgium lists many restaurants specializing in beer cuisine as well as good beer bars and shops. But it doesn't stop there. It also provides strange and obscure lists, such as beers associated with animals and every beer in Belgium according to strength. It includes a history of brewing, a glossary of beer terminology and descriptions of beer styles, but the brewery tour feature will keep you coming back. 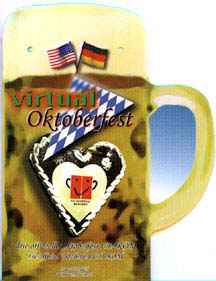 Wow your friends with your intimate knowledge of Munich's annual Oktoberfest even if you've never really made the autumn pilgrimage to Germany. Virtual Oktoberfest (VR) is riotous fun with one big caveat--it has some serious stability problems like eliciting system errors, occasional crashes, and audio glitches. Nevertheless, if you get past those inconveniences, you can take the 3D Ghost Train through the event-filled 187-year history of Oktoberfest (did you know that Oktoberfest has not been all fun and games? In 1980 a right wing group detonated a blast that killed 13 festivalgoers!), try your luck hoisting liters of beer as a Bavarian waitress (be careful not to drop any), or dress your Bavarian tour guide (perhaps in Lederhosen) for his visit to the festival. Or you may prefer to tap a beer barrel, take a crash course in Bavarian or yodel with Thomas Scholl, the world champion yodeler.

All this plus more fun and education is available when you tour the Virtual Oktoberfest. It is a bit short on instructions, so you may have to feel your way around a bit. For example, I was forced to redress my tour guide over and over until I figured out that I had to double click in the lower right corner to escape that window. VR offers valuable information like the importance of taking the metro to the festival because there is no car parking.

Perhaps your version won't suffer the inconveniences mine did, so if you decide to take the plunge, the Virtual Oktoberfest is available by visiting the Navigo Web site at www.navigo.de. 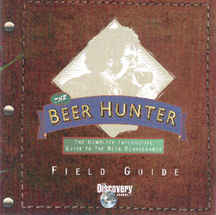 Jackson has been pioneering modern beer education for decades with his innovative books and his documentary Beer Hunter television series. His more recent writings have helped stoke the fires of the beer renaissance, so it's little wonder that he came out with The Beer Hunter CD-ROM-a mix of still photos, videos, a help section, your own beer hunter note taking section, resources and more.

Geared for the novice or intermediate beer enthusiast, The Beer Hunter may not capture the interest of someone who has already studied beer in depth. Although the "History of Brewing" and "Art of Brewing" sections are fairly international in scope, it is important to note that the "Field Guide" is limited to U.S. brewing regions only, as are the 200 brews listed, from which Jackson chooses his Top 24. The "Resources" section is broken into four subject areas: brew schools; beer related periodicals; beer related events, such as festivals and tastings; and brewing supplies and ordering.

Jackson's words and lectures are informed and informative, the video segments are usually clever, and Jackson himself is fun to watch and listen to. The CD is easy to use although two of the directional arrows are a bit small making quick clicking difficult.

The Beer Hunter CD-ROM is available in retail outlets nationwide including computer superstores and mass merchandisers or visit the The Discovery Web site at multimedia.discovery.com. 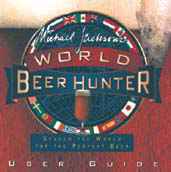 Michael Jackson's World Beer Hunter features interactive maps, profiles of more than 400 pubs and breweries worldwide, details on more than 300 beers, and more than four hours of audio and video clips, all seasoned with Jackson's refreshing wit. Suggested pub crawl itineraries offer a selection of beer tasting trips, while the "Personal Pub" feature allows the user to make and print personal tasting notes and ratings of each beer. This is one of the many features of the program that I really enjoyed.

You can take a tour that lets you learn more about the history of brewing, the brewing process and ingredients, beer styles, and Jackson's suggested lists of perfect beers for any occasions. If you particularly like a tour or any other feature, you can bookmark it for convenient return visits. There is also an efficient search menu to help you navigate your way around. One of my favorite features of the program is Online Connection. This allows you to connect easily to Jackson's World Wide Web site on the Internet (www.beerhunter.com). Sadly, The Discovery Channel recently abandoned Jackson's Beer Hunter Web site, so it is no longer updated on a regular basis.

Jackson's expertise provides unique insight into brewing traditions and the cultural heritage of beers from both well-known and obscure breweries from around the world, and teaches users the art of identifying, selecting and appreciating fine beers. The performance of the program was excellent. The audio and video were quick and crisp-sounding and -looking. 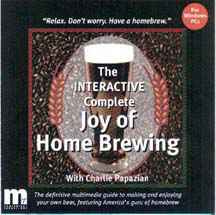 If Michael Jackson is the premier world beer hunter, then Charlie Papazian is the national grand guru of homebrewing. Papazian, credited with founding the Association of Brewers as well as the American Homebrewers Association, is a respected beer and brewing author. Using his New Complete Joy of Homebrewing book as a spring board, Papazian launched his Interactive Complete Joy to educate and entertain both novice and advanced homebrewers alike.

"Brew TV," divided into beginner and intermediate sections, offers 30 minutes of brewing instructions, and more than 60 homebrew recipes are available in "Charlie's Recipe File." The "Homebrewer's Journal" permits viewers to jot down entries in a card file for future reference when brewing, and the brewing calculator is invaluable for making computations such as alcohol content, bittering units, and necessary conversions.

Once you've created your brew and have time to enjoy it, the "Relax" section is awaiting you. It is filled with fun information like the traditions surrounding beer and beer drinking cultures throughout the world. For example, learn the proper glassware for different beer styles. For a wide array of beer resources "BrewNet" serves up lists of homebrew retailers, brewing associations, beer publications, Web sites breweries and beer-of-the month clubs, but be careful because it is neither comprehensive nor completely accurate.

I found few flaws with Papazian's Interactive Joy and would highly recommend it to anyone interested in learning to brew.

The Interactive Complete Joy of Homebrewing CD-ROM is available in retail outlets nationwide including computer superstores and mass merchandisers.