We yanks really do follow in our British forefathers' footsteps. For example, they have the royal family, we have the Kennedy family; they take tea and crumpets, we like coffee and English muffins; the Brits stage the Great British Beer Festival in London every summer, and we host the Great American Beer Festival in Denver each fall. 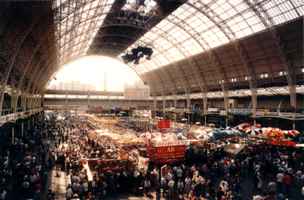 For 19 years the GBBF, organized by a British grassroots beer activist group known as CAMRA, has educated and entertained consumers with the world's greatest cask-conditioned ales. CAMRA (Campaign for Real Ale), which now has 45,000 members, set out in the '70s to badger and cajole the British beer makers into brewing traditional cask-conditioned ales instead of the fizzy, bland beers we know all too well here in the U.S.

Cask-conditioned ales, also known as "real ale," are unfiltered, unpasteurized, naturally brewed beer that is served while still alive, or fermenting. Some beer drinkers claim to have seen the promised land when tasting it for the very first time.

The 1996 GBBF drew more than 42,000 beer lovers to sample more than 300 beers. They consumed more than 35,000 gallons of beer during the five days of beer judging, live jazz, rock and comedy performances along with sumptuous food. The minimum serving of beer is 10 ounces, so if you want to savor the flavor instead of slamming suds, take a few friends to split the beer.

Cask-conditioned beers brought over from the United States made a big splash last year. Besides 10 cask-conditioned beers flown in from the U.S., 30 other American craft brewers had the honor of serving their beers at London's skylit Olympia Grand Hall where the festival was staged. When you add some 20 bottle-conditioned ales, 180 beers from foreign countries on five continents (American beers included) and 40 draft hard ciders, you've got the world's biggest beer hall.

Each year the British beers are judged and ranked by a panel of distinguished judges to determine the Champion Beer of Britain. The competition is well organized and nationally recognized, so winners earn huge advertising potential. Then the winner is announced to much fanfare. Last year saw a classic David vs. Goliath scenario where The Cottage Brewery, a 2-year-old microbrewery, sent its Cottage Norman's Conquest barleywine up against the giant macrobreweries as well as Britain's centuries-old breweries, and walked away with a stunning victory.

The event is staffed by 800 volunteers, who in return for working one of two sessions per day, receive free housing, subsidized food, and beer at deeply discounted prices. 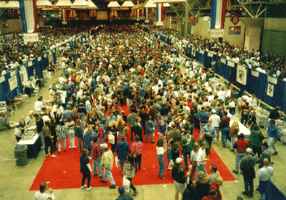 Each year an organized cadre of American beer aficionados fly over the pond to volunteer and take in the flavors, sights and sounds of beer heaven. For Americans volunteering at the festival, the hours are quite flexible and everyone is most congenial. You can learn to tap and spile casks, how to draw a proper pint of real ale, and decipher English accents. This year's GBBF takes place on August 6-10 again at London's Olympia Grand Hall.

If you just can't get enough of the growing numbers of American microbrews, I've got just the festival for you. Why not attend the Great American Beer Festival staged in Denver in September? While you won't find any British brews (only American beers allowed at this festival), the beers you will find range from White Moose chocolate dessert beer from New Orleans' Dixie Brewing Co. to Alaskan Smoked Porter from Alaskan Brewing Co., Juneau, Ak. You won't see many, if any, cask conditioned ales here, although the traditional style of beer is beginning to catch on here in the U.S.

Each year attendance records are set and last year was no exception with nearly 25,000 participants at this three-day event. The country's microbrewery and brewpub explosion was never more evident than at this festive tribute to craft-brewed beer. Last year a total of 335 breweries from 46 states showcased their record number 1,345 beers. In contrast, the first GABF, a single afternoon affair in 1982 in Boulder, Colo. drew 700 beer lovers to sample 40 brews.

The Professional Panel Blind Tasting, made up of 70 beer experts from around the world, judge commercially brewed beers over two days and award gold, silver, and bronze medals in each of 38 style categories. There is no grand champion, but just as in Britain, winning breweries capitalize on bragging rights as well as advertising profits.

The $25 cost of admission includes a commemorative tasting glass, a festival program guide, and unlimited one-ounce beer tastings. One ounce may not sound like much beer, but it is more than enough to determine whether you liked the beer. The GABF also offers educational demonstrations and seminars as well as beery merchandise and food booths whether you crave pizza, popcorn or buffalo brisket.

Even first-time attendees get into the spirit at Denver's expansive Currigan Exhibition Hall, joining in the huge group howl that goes up whenever a tasting glass slips from a reveler's grasp smashing onto the floor. Last year a troupe of costumed bagpipers paraded up and down the aisles each evening. The kilty bagpipe band from McGuire's Irish Pub of Pensacola, Fla., introduced pipes and drums to the festival fare the previous year. To celebrate its 15-year anniversary, the GABF will feature an Anniversary Beer Garden this year serving up food designed and prepared by master chefs and prepared with GABF beers.