How to Become a Card-Carrying Beer Judge

So, you consider yourself an avid beer fan. You've read every word written in this column over the past few years, sought out every craft-brewed beer you could find and tasted each one. You've even visited a lot of brewpubs and microbreweries, which have sprouted up in towns and cities across the country. I'll bet you think you're a pretty good judge of beer and have some strong opinions about which beers are good and which ones are bad. If you want to take your beer evaluation skills to the next level, why not become an official, card-carrying beer judge?

It's a rewarding and social hobby, in which the participants develop a great deal of camaraderie. While many beer judges are homebrewers, you don't have to be one to be a beer judge. Nevertheless, it certainly helps when trying to troubleshoot beer flaws. There are many beer judges who are neither home, nor commercial brewers.

There's a lot more to judging beer than taking a few gulps and pronouncing it great or not quite right. To become a card-carrying beer judge, you must pass the Beer Judge Certification Program (BJCP) exam. When I tell unwitting beer fans that there is an exam about beer, they usually laugh and say something like, "Oh, that must be a tough test." But in reality, it is rather rigorous and those who have taken it compare it to professional exams such as the Certified Public Accountant exam. Naturally, an exam about beer is much more interesting and fun than an exam about accounting, but it does take a fair amount of preparation to pass.

The BJCP exam is a three-hour test, administered in two parts: essay and tasting. The essay portion, which is comprised of 10 questions and worth 70 percent of the final score, is designed to determine the judge candidate's overall knowledge of beer and his or her ability to clearly express his or her evaluations in writing. There is always one question about the structure of the BJCP program. This is considered the easiest question. A test-taker's ability to answer this question proves that he or she has a rudimentary understanding of how the organization is structured.

Other essay questions cover world beer styles and technical aspects of brewing. Test-takers can count on four style-related questions because it is essential for a beer judge to have a certain level of knowledge about the more than 20 recognized beer styles and their sub-styles. Test takers can also expect four questions on the brewing process, including one about designing a beer recipe. Here homebrewers have the advantage and can draw on their experience, while others must rely on their reading and studies for the answers. Lastly, there is usually one open-ended question about one of the fundamental ingredients in beer.

The tasting program of the exam is worth 30 percent of the final score. Each candidate judges four beers just as he would in a competition, over the course of the three-hour exam. The judge candidate must score the beer and describe its attributes, as well as comment on its style characteristics. Candidates score the four beers using the standard 50-point scale, evaluating characteristics such as appearance, aroma, color, head retention, body, flavor and overall impression. The beers you judge may range from world-class to very flawed and your evaluations are graded against that of the exam proctor's.

There are seven levels of beer judge ranking beginning with the title of Apprentice Judge (a candidate who is still preparing to pass the test), all the way up to the pinnacle of judgedom, Grand Master Judge. A Judge's level of certification is determined by two factors: exam score and experience points, which are earned by participating in sanctioned beer competitions. To pass the exam and become a Recognized Judge (one step up from Apprentice Judge) candidates must receive an exam score of at least 60 with no experience necessary to attain this level. Other rankings ascend as follows: 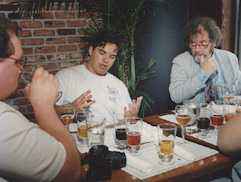 By now you may be thinking that this sounds like an awful lot of effort just to get that card that proclaims you're "a real beer judge." And it is. But being a BJCP judge also has its privileges. Although the BJCP by-laws state that judges may not use their judge status for financial gain, you'll gain new respect from family and friends when they ask what makes you think you know so much about beer and you whip out your card. Also, many bartenders and commercial brewers will offer you free samples just to get your opinion of their beers. Some will also jump at the chance to give you an in-depth tour of their breweries once they learn of your credentials.

Furthermore, judging, which is done in teams composed of two or three judges of varying levels, is fun. The teams provide wonderful opportunities for novice beer judges to learn from the more experienced judges. Besides, just think of all the great beers (and yes, some not-so-great beers) that you'll get to drink for free when judging. Additionally, learning more about beer in preparation to pass the exam will enable you to have a greater appreciation for the beers you drink simply for pleasure.

If you're still interested in taking your beer evaluation skills to a higher level, you'll need to know how to learn more about the BJCP and some recommended reading in preparation for the exam. Most homebrew clubs do not require their members be homebrewers, and they organize BJCP exam study groups, so you should consider joining you local homebrew club. To learn about homebrew clubs in your area, call the American Homebrewers Association in Boulder, Colorado, at (303) 447-0816 or visit their Web Site at http://www.beertown.org. To learn more about the BJCP, study groups or where and when the exam will be given, visit the BJCP Web Site at http://www.bjcp.org or email BJCP Program Administrator Russ Wigglesworth at program_admin@bjcp.org