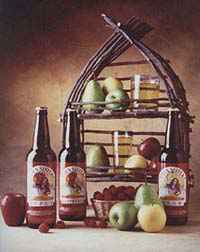 Apple cider is enjoying a second wave of popularity on the American landscape. I'm not referring to the syrupy drink found in a child's juice box, nor the fizzy, apple-flavored imitation champagne found on your grocer's shelves. I'm talking about hard apple cider with a kick that is boot scootin' its way to the front of the craft brewing industry.

There is a great deal of confusion in the United States about apple cider because the term "cider" in all countries other than the United States refers to fermented apple juice. But there was not always confusion in the U.S. about cider. Indeed, until the mid 1800s, hard cider, known simply as cider, was the most popular beverage in North America. In early America, cider gained popularity because -- unlike milk at that time -- it was plentiful, inexpensive to make, and stable.

French and English colonists brought to the New World the cultures and customs of their homelands. Owing to their love of cider, they brought apple seeds and planted orchards in New England. As luck would have it, the thin rocky soil of that region was poor for growing grain and other crops but ideal for cultivating apple and pear trees. By 1629 apple orchards were established in both the Virginia and Massachusetts colonies, according to Vrest Orton's The American Cider Book.

When George Washington ran for the Virginia House of Burgesses in 1758, his campaign expenses included eight quarts of "Cider Royal," and by 1767, the per capita consumption of cider in Massachusetts was 1.14 barrels! John Adams, in 1796, wrote in his diary about the virtues of cider, reporting that drinking a tankard of cider each morning put his stomach at ease and alleviated gas. Hence, "An apple a day ..." Thomas Jefferson made cider at Monticello and served it at meals regularly.

During the presidential campaign of 1840, William Henry Harrison's campaign spin doctors offered free cider to supporters of the Harrison-Tyler ticket. The "free-cider" strategy proved so successful during campaigning that the tactic was employed again at the polls on election day for all that voted for Harrison. It became known as the "cider campaign" and Harrison won the election by a landslide. Cider was so widely accepted in the American culture that even clergy and deacons of the church, who denounced the likes of whiskey and ale, stocked barrels of cider for personal consumption.

Cider's downfall began with the Industrial Revolution and ended with Prohibition. While Americans flocked from rural towns to urban centers, apple orchards were being cut down as the production of cider became less profitable. In the late 1800s, the influx of German and Eastern European immigrants to the U.S. contributed to the decline of cider as they brought their penchant for beer to our shores.

Cideries had also begun fortifying cider with rum, giving what was once considered a temperate and healthful alcoholic beverage, quite a kick and causing over imbibers to become "cross and unbearable." The temperance societies set out on a campaign to stamp out the cider menace, and the temperance movement coupled with the move of American society from agrarian to industrial was more than the cider industry could bear. Cider's final insult came in 1918, when a brutal winter's freeze wiped out entire orchards of cider trees. Cider all but vanished with the advent of Prohibition shortly thereafter.

Today, cider is enjoying a triumphant revival fueled, in part, by the new enthusiasm for full-flavored, craftbrewed beer. Following President Carter's legalization of homebrewing in 1978, Americans discovered the joys of home beer and winemaking. It was only a matter of time before cider and mead (a fermented honey beverage) were rediscovered by the new generation of brewers. The new interest in cider in the early 1980s led to the importation of commercial English and French ciders. American tourists returned home with a new appreciation for ciders from the United Kingdom and France.

Cider sales, according to Cazanne and Morgan Miller who maintain Cider Space on the Web, are growing by more than 100 percent annually in the U.S. and by 40 percent in the U.K. and France. In 1995 alone, sales of cider in the U.S. grew by 162 percent, reported Market Watch. Over the next decade, the U.S. cider market is expected to skyrocket from 1,000,000 cases annually to 15,000,000. 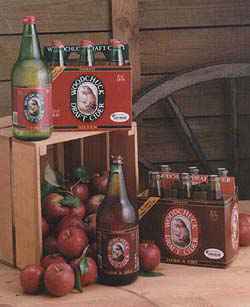 In 1991, the American Homebrewers Association (AHA), based in Boulder, Colorado, formally recognized cider and began encouraging homebrewers to learn about cidermaking and to compete in cider competitions just as homebrewers and winemakers do with beer and wine.

There are four categories under which ciders can be entered in AHA sanctioned competitions:

Still
Noneffervescent. Under seven percent alcohol by volume (abv). It can be dry or sweet, brilliant pale yellow in color with an apple aroma.

Sparkling
Effervescent. Under eight percent abv. It can be dry or sweet.

New England Style
Still or sparkling dry cider. Between eight and 14 percent abv. It can be made with adjuncts such as sugars, molasses or raisins. Wild or wine yeasts only may be used for fementation.

Specialty Cider
Any adjuncts are allowed and alcohol content must be below 14 percent by volume.

But the Millers discovered that cider tasting and judging was difficult because several styles were lumped together, so they have attempted to develop more cider categories and have proposed a total of eight. They recognize the AHA's New England Style and Specialty Style ciders but have added five additional categories along with some subcategories. Here is what they've come up with:

Draft Style
A cider which is not necessarily drawn from a tap like beer but has been cut to lower its alcohol content to no more than 6 percent alcohol by volume (abv). There are two categories of draft cider:

Apple Only
Cider cut with apple juice or apple concentrate only.

With Adjuncts
Cider cut with sugar, carbonated water or a combination of the two along with juice and/or apple concentrate.

Farmhouse Style
A traditional style cider which is also called "real cider." It is a still cider ranging from 5-12 percent abv. There are two categories of farmhouse style:

Dry
A cider to which nothing has been added or taken away.

French Style
A cider whose fermentation has been arrested by a process called keeving or by using calcium chlorate, keeping it's alcohol level from 2-5 percent abv. Nothing has been added, and the cider is not cut with anything. There are two styles of French cider:

Still
A cider without carbonation.

Effervescent
A cider with carbonation.

Sparkling
A higher alcohol cider -- above 5 percent abv -- which has not been cut but adjuncts are acceptable. There are two styles of sparkling cider:

Natural
A cider which has been carbonated by the champagne method.

Forced Carbonated
A cider with carbonation induced by artificial methods.

Cyser
A cider with nothing but honey added to it. This is recognized by the AHA as a mead category.

Apple wine
A fermented apple drink above 12 percent abv, which has not been cut but sugars or concentrates may be added to reach a higher alcohol content.

Cidermaking is easy and fun. Here is a basic recipe for a Farmhouse Style cider (ingredients for five gallons):

Transfer the juice and sugar using a sanitized funnel or food grade plastic hose into a sanitized glass or stainless-steel container at room temperature. Allow the sugar to dissolve and then pitch the lager yeast and affix a fermentation lock atop the carboy. It will soon begin to bubble away releasing carbon dioxide as the yeast converts the sugars into alcohol. Allow the cider to ferment and mellow for at least two months before transferring it with your sanitized food grade hose into bottles, a keg, or any vessel you prefer. Then enjoy. Any homebrew supply shop can get you started with the proper advice and equipment.