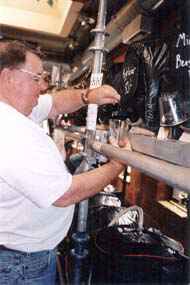 On a recent trip to Chicago for the country's first ever Real Ale Festival, I found ecstasy in a pint of cask conditioned ale -- well, actually several pints. Unlike other beers, these ales must be served within a very tenuous window of time to be at perfection, and it is delightfully obvious when the pint you're drinking is at that optimum stage -- soft, fruity, complex and drinkable. Cask conditioned ale must remain in the cask for the exact prescribed time with its temperature at just the right level -- conditions I was unaware of while enjoying my introduction to it some three years ago.
All I knew was that the porter I was drinking tasted much like a rich serving of mocha mousse without all the usual carbonation that forces me to blurt a burp at times when I'd most like to be a lady. Since that day, I frequently pondered why and how that beer was eminently superior to other pints of porter I'd enjoyed. So I decided to learn what cask-conditioned ale was all about and why it is becoming the hottest commodity in the craft brew industry.

In England, the hotbed of real ale, and in the United States, the secondary fermenter was traditionally a wooden cask, but in this day and age it's often a stainless steel keg or cask called a firkin, which is easily identifiable by its protruding pegs for venting and distinctive potbellied girth where the yeast collects. 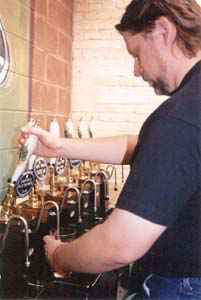 Once in the cask, the ale conditions at between 50 and 55 degrees for one to two weeks. This secondary fermentation and maturation in the keg or cask is what produces the rich taste, depth of flavor and the individuality of each ale. It is the essence of brewing. Cask conditioned ale must be handled with extreme care at all times and cellarmen or cellarmasters, as those entrusted with this responsibility are known, go through extensive training to acquire the understanding and experience to know how best to care for it and when it's at its peak serving condition. After all, cask conditioned ale is a living, breathing entity and is highly susceptible to environmental conditions and sloppy or untrained handling.

At serving time, the cask is vented of any excess carbon dioxide (CO2), a natural by-product of the fermentation. The ale is then dispensed by gravity or hand pump (also called a beer engine), which can be recognized when you notice your bartender putting some muscle into his pull of the tap handle as he draws your beer. The keg or cask is tapped before all of the sugars have fermented out, and as the CO2 builds up again, the fermentation slows or stops. When the CO2 is repeatedly vented, the fermentation repeatedly restarts, creating characteristic changes in the ale.

Regulating the CO2 is a crucial responsibility of cellarmenship: If the beer is served too soon it will be flat and not fully flavored; if too much pressure builds up, the yeast will stop working; if under too little pressure, the beer goes flat; and if the beer sits in the keg beyond the prescribed two to three days, it can become spoiled and oxidized.

True cask conditioned beers are naturally carbonated, unfiltered, unpasteurized and uncentrifuged, and when properly dispensed are not pushed through the tap with CO2, which overpowers the soft, smooth texture and taste with three times the volume of fizziness, nor with nitrogen, which can mask some of the hop character. As U.S. craft-beer enthusiasts are becoming more beer savvy, cask conditioned ale's star is rising across the country.

Which leads us to Britain's CAMRA (Campaign for Real Ale) organization, whose raison d'Ítre when formed some 20 years ago was to ensure that cask conditioned ale survived at a time when it was disappearing from commercial brewing. CAMRA has been highly successful in its mission, which still is a worthy one because many impostor beers are being spawned by the forces of new technology.

One of those many British impostors found its way across the Atlantic in recent years as a "new" draft dispensing system, which does not necessarily translate into the hotly debated issue here that it is in the United Kingdom, where there are thousands of die-hard cask conditioned ale fans, where Prohibition never existed and where craft-brewed beers never gave way to bland American lagers.

The dispensing system renders beer reminiscent of Ireland's Guinness or Murphy's Irish Cream Stout draft-in-a-can. These cans have a built-in device popularly known as a "widget" which, when triggered by the opening of the can, releases nitrogen up through the beer to produce a creamier head and softer texture and taste than possible in conventional cans of beer. Craft brew pundits predict that nitrogen pushed beer will become the next boutique beer fad, which may be true, but that's only because it strives to emulate the beauty of cask conditioned ale and is twice as easy to create.

As for me, I'm on a mission to search out my next pint of cask conditioned ale -- or even the first good imposter not too far from home, but don't tell my friends at CAMRA.