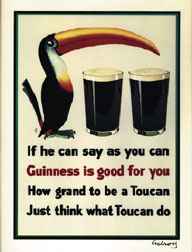 Having trouble sleeping? Feeling constipated? For aiding digestion and as a natural tonic, drink a pint of stout. Stouts have had an enduring tradition of giving strength, possessing nutritive and healing values and, in bygone years, were prescribed by doctors for alleviating a myriad of ailments.

Some traditional English sweet stouts, referred to as milk and cream stouts for the milk sugar (lactose) or whey added to the brew, were thought of as pick-me-ups for invalids and, as recently as the mid-1900s, were frequently recommended to nursing mothers by medical professionals.

According to British beer expert, Michael Jackson, in 1920 a British advertising agency polled drinkers about why they drank Guinness. Among the most common responses was, "It does me good." This likely formed the basis of Guinness' long and successful advertising campaign espousing "Guinness Is Good for You," "My Goodness, My Guinness," and "Guinness for Strength."

Although the earliest recorded use of the word "stout" to describe a beer came in 1677, stout as its own commercial beer style was not established until around 1820. Before then, stout and porter were the same style of beer. Stout is simply an archaic term meaning "strong" and was used to refer to a high alcohol version of porter called "stout porter."

Today, more than any other beer style, stout is defined by a single commercial brewer -- Guinness of Dublin, Ireland, and its signature dry stout. But Guinness came from humble beginnings when Arthur Guinness bought an abandoned brewery at St. James Gate in Dublin in 1759. Initially, Guinness was one of the first breweries in Ireland to brew a porter and by 1799 it had dispensed with brewing all other styles of beer in favor of becoming a porter specialist. But with the advent of black malt, Guinness proved willing to change with the times and began brewing stouts in the mid 1800s.

Contrary to its rich, opaque black character, Guinness is a rather light beer when it comes to calories and alcohol content. Guinness Draught weighs in at 4.2 percent alcohol by volume, which is slightly weaker than Budweiser at 4.7 percent. By contrast, the bottled version exported to the United States is stronger with an alcohol content of 6 percent by volume. Today, there are some 19 variations of Guinness Stout made in breweries around the world.

The profile of the classic Irish-style dry stout includes a malty, caramel flavor up front with a distinctive dry-roasted bitterness in the finish. There should be no perceptible hop or fruity aroma or flavor, but it should display a rich, creamy head and rich character with medium to full body.

While Guinness is the standard-bearer for the classic Irish-style dry stout, there are other excellent examples from Ireland, most notably Murphy's Irish Stout from the Lady's Well Brewery in Cork and Beamish Genuine Stout, coincidentally also in Cork. Interestingly, Murphy's was traditionally thought of as the Catholic brewery, while Beamish was the Protestant. 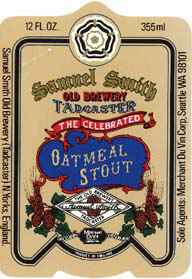 The association of stouts with oysters and lobster has intrigued gastronomists for years. Jackson describes the combination as a marriage truly made in heaven, and I would have to concur. Brewers of old took this one step further by producing stouts that included oysters as an ingredient. Not surprisingly, they were dubbed "oyster stouts." Some contained ground oyster shells while others contained oyster meat or simply oyster juice.

My best recollection of a homebrewed oyster stout was at an American Homebrewers Association National Convention in Baltimore in 1995. I had just entered the hospitality suite hosted by the Washington, D.C.-based homebrew club, Brewers United for Real Potables (BURP), when I heard a commotion and spirited screams emanating from the adjoining room. When I stepped into the room I spied black-as-tar, homebrewed oyster stout coating the entire room -- the drapes, ceiling, upholstered chairs, carpet, bedspread and all beer geeks within spraying range. Apparently, when a pudgy, bespectacled club member opened his bottle of homebrewed oyster stout, enough pressure had built up in the bottle that the fishy brew blew everywhere. It must have been my lucky day to have been spared the carnage. It wasn't a bad tasting beer either.

Sweet stouts first emerged as a recognizable commercial style in London in the early 1900s. By 1936, Mackeson's Milk Stout from Mackeson Brewery of Kent, England, was widely available throughout the country. Although the Whitbread-owned Mackeson continues today to brew its "Sweet Stout," England's Ministry of Food persuaded brewers to remove lactic references from their labels. Still, Mackeson's displays a butter churn on its label and other breweries continue to use the appellation "cream stout" on their own. Outside the jurisdiction of the British government, the Guernsey Brewery, in the Channel Islands, still brews a beer labeled "Milk Stout," even though it no longer contains lactose. As in England, the United States has strict laws prohibiting the word "milk" on beer labels, contending that it would confuse consumers. Nevertheless, the Boston Beer Co. is permitted to market the widely available Samuel Adams Cream Stout. Go figure.

Sweet or cream stouts offer less roasted bitterness on the palate and are more full-bodied than dry stouts. The style's body can be fortified with lactose, and the malty sweet, chocolatey-caramel flavor should be balanced with hops.

Some sweet stouts include oatmeal as a key ingredient. This practice was begun during the "nutritious stout" era and continues today. The oats contribute a silky smoothness to the stout, and because of their oily nature, must be added to the brew in small proportions. Two of the best oatmeal stouts available in the United States are Samuel Smith's Oatmeal Stout from Tadcaster, Yorkshire and Anderson Valley Brewing Co.'s Barney Flats Oatmeal Stout.

Had it not beer for the Russians, Imperial Stout, originally known as Imperial Russian Stout, may never have been produced by the Brits. It was Russian Czarina Catherine the Great's voracious appetite for stout that inspired the brewers of London to create this style. By the time barrels of stout from London reached their Baltic ports, most of it had turned stale. To solve this problem, British brewers produced a highly hopped, high alcohol stout to survive the long journey. Courage, the British brewery that was Catherine's primary supplier, continues to produce its Imperial Russian Stout today, and it is believed to be the longest continuously marketed example of the style. The present day label states that it was originally brewed for Catherine II, Empress of all the Russias, and carries the phrase "As brewed for more than 200 years."

Typically, imperial stouts bear an alcohol content of more than 7.5 percent by volume with an intense roasted, perhaps burnt, flavor and strong fruity esters, such as burnt currants and raisins. It is full-bodied and warming. Although Courage's version is not widely available in the United States, some other fine examples of this imaginative beer are available: Yakima Brewing & Malting Co.'s Grant's Imperial Stout, which is a bit lower in alcohol and is brewed with honey; North Coast Brewing Co.'s Old Rasputin Russian Imperial Stout; Brooklyn Brewery's Black Chocolate Stout; and Samuel Smith's Imperial Stout.

The following is Michael Jackson's inspiring description of imperial stout:

"When a high gravity, roasted grains, and often a warm fermentation, perhaps with an ale yeast, are combined, the result is a brew of extraordinary power and complexity. Its intensity calls to mind the tarry sweetness of a Pedro Ximenez sherry. The roastiness melds with smoky, tar-like, burnt, fruity, estery notes and alcohol flavors. There is a suggestion of cocoa, or strong coffee, on a winter's night. The fruitiness is reminiscent of the burnt currants on the edge of a cake that has just been removed from the oven, or the Christmas pudding traditional in Britain, heavy with dried and candied fruits. The alcohol suggests that the cocoa or coffee, pudding or cake, has been laced with spirit."