As a child, living for 12 years in Europe with his family, John Doble Jr. became well-accustomed to the pride associated with fine beers. In college, he and his brother, like most students, could not afford anything more than cheap, watered-down lagers. So, he began brewing his own beer. What started out as a hobby has blossomed into a full-time labor of love — a love of beer. The Doble family now owns and operates Tampa Bay Brewing Co. brewpub in Tampa, Florida’s historic Ybor City district, where Doble serves as brewmaster.

Tampa Bay Brewing Co. is anything but a franchise microbrewery. Indeed, it is the quintessential family affair with John Jr. at the helm; mom, Vicki, donning the general manager’s hat; dad, John Sr., handling administrative details; brother, Mark, a full-time executive at Hewlett-Packard, moonlighting as part-time MIS administrator; and other brother, David, assuming the role of assistant brewer. The Tampa Bay Brewing Co. emerged as the result of a growing clientele at the family’s first beer-related venture, Brew Shack, a successful homebrew supply shop in Tampa. "The way recipes were selling, we knew there was a market for real beer," Doble said. "And we weren't afraid to give it to them."

Nine house brews, plus a wide array of seasonal brews, are created at Tampa Bay Brewing. When demand for the RedEye Ale becomes more than Doble can keep up with, nearby Ybor City Brewing Co. microbrewery lends a helping hand by brewing a batch or two of RedEye with Tampa Bay’s ingredients and to its specifications. Beer aficionados will be delighted to learn that Tampa Bay Brewing has two proper cask-conditioned ales on offer, employing British firkin casks, and soon hopes to offer three. Cask ales are naturally carbonated and conditioned, served at cellar temperature (50 degrees) and hand-pulled with imported beer engines. If you've never tasted a "real ale," you must try apint of Doble’s cask ale — pure heaven.And if that’s not enough choices for any craft beer enthusiast, Tampa Bay brings in guest beers. A few recent ones on tap include Ybor City’s Ybor Gold and Calusa Wheat, Samuel Adams Double Bock and Redhook ESB. Doble uses four yeast strains and brews on a 10-barrel, Criveller made brewing system where he produces both ales and lagers.

"Most brewpubs only serve either ales or lagers — rarely both," Doble said. "And they try to pass off light ales as lagers." Tampa Bay has one 20-barrel fermenter, three 10-barrel fermenters and 16 Grundy serving tanks that served in a previous life at Bass Ale Brewery in England. The Grundys miraculously are stacked horizontally three high and encased in glass behind the bar in what is affectionately dubbed the "Big Ass Cooler." "We can make a lot of beer," Doble said. Here is a sampling of the house beers Doble and assistant brewers David Doble and Jon Mendrake turn out:

Extra Special Bitter — a British-style ale brewed with Fuggles and W.G.V. hops. As its name suggests, ESB is slightly malty with a hopped bitter taste and occasionally served with nitrogen for a rich creamy head. Abv: 5.6 percent.

One Night Stand Pale Ale — an American-style pale ale brewed with generous portions of hops from the Pacific Northwest. It is golden in color with a pleasant hop nose. Abv: 5 percent.

Wild Warthog Weizen — a rotating wheat beer that was a hefeweizen through the summer months and will change to a dunkel weizen as cooler weather approaches. The hefe weighed in at 5.2 percent abv. 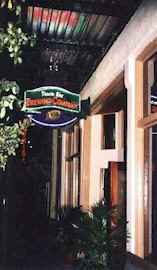 Tampa Bay Brewing Co., which seats 170 guests with bars both up and downstairs and an inviting balcony on the second floor, is housed in an original brick building in the historic Ybor City district. This brewpub is not only a haven for serious beer drinkers, but also is fast becoming one of the city’s hot spots with a menu that combines Old World pub fare with New World cuisine. Stirred into a mix of British pub classics like shepherds pie and bangers and mash, are other enticing fare such as ale steamed gulf shrimp and spinach salad topped with duck breast. The Iron Rat Stout float created with homemade vanilla ice cream is a fine cap to any meal. With its brewing tradition and culinary classics showcased in a modern brewpub, Tampa Bay Brewing Co. brings something old and something new to Tampa. "We wanted to build a true American brewpub, a brewpub Tampa could be proud of," said Doble. True to their word that’s exactly what the Doble family has done.