"At Christmas, which was naturally a time of great festivity, the master of the house gathered his family around the bowl of wine, or mead or spiced ale, and passed it around to the words "'Waes haeil!'"
-- Beverages Past and Present, 1908 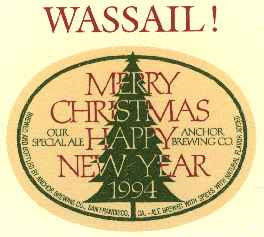 Traditional English yuletide always includes the wassail bowl, a hot spiced ale with roasted apples. It was the custom for every English family to have a steaming bowl of wassail ready to serve throughout the holiday season in old England.

Many of today's traditions and celebrations are rooted in antiquity, and the custom of holiday "cheer," which predates Christmas itself, is no exception. In ancient times, Romans, Greeks and pagans of Northern Europe ushered in the arrival of the winter solstice with celebration. Beginning Dec. 23, the winter solstice marked the end of the dark days and a sense of renewed optimism and brighter days to follow. Sounds to me like a good excuse to party.

Later, the early Roman Catholic Church chose to observe the birth of Christ during the winter solstice, reasoning that it would be best to continue the festivities during the same period but simply change the purpose of the celebration. Thus, a pagan celebration became a sacred Christian holiday.

During the Middle Ages, a high alcohol ale, made specially for the holiday season, was brewed by European monks, English villagers and Scandinavian brewsters (women brewers). The English toast at the time was an Anglo-Saxon term, "waes haeil," meaning "be whole" and was replied with "drink haeil" meaning "to your health." Sir Watkin W. Wynne is credited with preparing what is considered to be the first wassail bowl cocktail in Oxford, England in 1732. In some parts of England roving bands of wassailers strolled up and down village streets spreading good cheer by caroling and carrying their wassail bowl decorated with ribbons and garlands. Upon arriving at each house, they offered their wassail to the householders or asked their wealthier neighbors to fill their bowls.

The wassail bowl was a popular concoction of apples, ale or wine, sugar and spices and was served warm to comfort the bodies and liven spirits of the wassailers. By most accounts, this was more a harmless pagan practice, rather than Christian tradition, which the church did not try to stop. After all, it did promote peace and goodwill unto all.

Although the wassail bowl tradition has not widely survived in the American culture, homebrewers as well as pub and microbrewers have led the revival of spiced beers in the United States. Anchor Brewing Co., San Francisco, pioneered the revival of holiday spiced beers in 1974 when it introduced Our Special Ale. Since then, it has continued to brew, in limited quantities, a spiced ale from a different recipe each year for the holiday season. Countless micros have followed suit with winter warmers released each year for the holiday season.

Preheat oven to 375ƒF. Core the apples and pare 1-inch strip of skin from around the middle of each apple to prevent splitting. Place apples upright in a buttered baking dish. Place 1 tablespoon of brown sugar in center of each apple. Bake uncovered 30-40 minutes. (Time will vary with size and variety of apples.)

Serve the brew from the kettle or pour it into a punch bowl after allowing it to cool slightly. Add the baked apples. Serve in cups. The apples may be eaten.