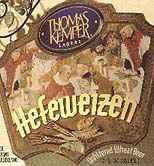 When wheat beer is mentioned in a word association game, the first words that come to mind are spritzy, quenching, tart, and tangy. That's because no other beer style offers the refreshing flavors that are found in a wheat beer. Wheat beer is the sparkling champagne of the beer world, and while at one time it was a dying beer style, it has come back in a big way and with a myriad of variations and substyles.

Wheat beer is brewed from 40-75 percent raw or malted wheat plus the usual malted barley. Wheat imparts a distinctive flavor as well as a rocky, white head to beer. They are usually unfiltered and keg- or bottle-fermented for a hefeweizen (hazy wheat), but it is not uncommon to encounter kristallklar (crystal clear) or filtered wheat beers as well. Although usually pale in color, there are some notably dark styles of wheat beer.

Wheat beers are most often quaffed during the summer months because they're so light and enjoyable when the weather is hot. Indeed, they are often garnished with a slice of lemon, which enhances the refreshing character of the beer, but dominates the otherwise fabulous aromas and flavors of the style. When it comes to food, wheat beers are most often associated with breakfast or brunch and make an inviting substitute for champagne or a mimosa with a meal of eggs and sausage.

Wheat beers are primarily ales (top fermented) with short conditioning periods. The most common style of wheat beer produced today is the Bavarian wheat beer traditionally made in South Germany, which is called weizenbier (wheat beer) or weissbier (white beer). Weizenbier is fermented with a special wheat beer yeast which imparts a clove-like spiciness with vanilla or nutmeg notes and a fruitiness reminiscent of bananas and apples. It is low in bitterness and mildly tart with a soft roundness characteristic of German hefeweizens. It is pale to light golden in color.

Dunkelweizen (dark wheat) and weizenbock (wheat bock), on the other hand, are also native Bavarian styles but darker in color. The dunkelweizen is brewed with roasted malt to render a maltier, yet complex, flavor and colors ranging from amber to dark copper. Weizenbock is maltier still with little hop character and more roasty and chocolatey flavors and aromas. It is the strongest of the three weighing in at around 7.5 percent alcohol by volume (abv) compared to its weizenbier counterpart at about 5 percent abv. It is often served as a winter wheat beer.

Many U.S. brewpubs serve fine examples of wheat beers -- both Bavarian and American style -- which I will discuss shortly. Some outstanding examples of German-brewed weizenbiers available in the U.S., either in the bottled version or on draft, include Paulaner Hefe-Weizen, Schneider Weisse, Ayinger Ur-Weizen (dunkel), and the unique Aventinus Wheat Doppelbock (double bock).

A wheat beer style that has not enjoyed a strong renaissance like the others is the Berliner Weisse. Sadly, there are only two breweries left in Berlin still brewing the style which is characterized by its intense tartness. In addition to fermentation with an ale yeast, Berliner Weisse is fermented with lactic cultures to produce its acidic or green apple-like character. It is most often low in hops with a pale straw color and served as an aperitif or summertime quencher. To soften the intense sourness, Berliner Weisse is traditionally served with a dash of essence of woodruff or raspberry syrup. The woodruff, an herb grown in the forests around Berlin and used to flavor sodas and mineral water, imparts a vibrant lime-green color to the beer. Raspberry syrup imparts an inviting red hue. Some consider Berliner Weisse an appellation questioning whether a true Berliner Weisse could be brewed anywhere else, but indeed, American craft breweries produce it on occasion as well as breweries in the occasional north German city. Kindl Berliner Weisse, imported by B. United International importers of Elmsford, N.Y., is available in selected markets in the U.S.

Although quite popular in the 1800s, Belgian white wheat beer (witbier in Flemish and biere blanche in French) was on the list of endangered species by the 1950s. In 1966 a Belgian brewer named Pierre Celis decided to revive the style and by the 1980s it had been rediscovered in Belgium. Meanwhile, Celis was bought out by brewing conglomerate, Interbrew, and in 1992 moved his brewing operation to the unlikely location of Austin, Texas. Now we lucky Americans don't have to journey all the way to Belgium to enjoy Celis's world class wit beer: Celis White.

Belgian wit beer is characterized primarily by its distinctive fruit and spiciness. The style ranges from tart to sweet-sour or soft. CuraÁao orange peel, coriander, and Belgian white beer yeast give this light refreshing wheat ale its unique flavor and aroma. Typically Belgian wits are very pale and cloudy with a dense white head. They are brewed with unmalted wheat which may account for a firmness and graininess not found in the German versions. Celis Brewery is now partially owned by Miller Brewing Co., but Celis White is available in selected markets nationwide. Hoegaarden (pronounced "who-garden") Wit, the best known example that is brewed in Belgium, is widely available in the U.S.

Finally, Belgian lambic beers are brewed with a measurable amount of unmalted winter wheat, but the family of lambic beers is the most unusual and complex of all beer styles and would best be served in a story of its own.