What could be a more enchanting way to share the holidays than luxuriating over a selection of winter warmers with friends and family? This loosely defined style of beer has exploded in popularity throughout the beer cultures of the world, and the United States is no exception.

Not only are microbreweries and brewpubs releasing winter warmers faster than you can say Anderson Valley's Winter Solstice Select Ale, but even the breweries entrenched in light lagers have hopped aboard the seasonal beerwagon. Coors, for example, brews a nicely spiced seasonal lager dubbed Winterfest.

Traditionally, winter warmers have been hearty, slow-sipping English-style ales; guzzling them would be a travesty.

They are released for a limited time during the winter months, primarily to celebrate the spirit of Christmas. But the style has expanded, and today lagers as well as ales qualify as winter warmers.

A Winter Warmer can range from a German double bock to an American barleywine and everything in between, but the most frequent distinguishing characteristics include a combination of the following: brown to deep copper to black opaque in color; increased alcohol content resulting in a more warming effect; and a myriad of fruits, spices or other ingredients added during production. 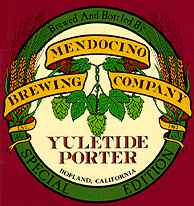 The recipes and flavor of some seasonal beers change from year to year but retain the same name, such as Anchor Brewing Co.'s trend-setting Our Special Ale. Adored by beer lovers since its introduction in 1975, Our Special Ale is released exclusively during the week of Thanksgiving and remains available only through mid-January.

Holiday beers are usually available during a narrow window of time because most beer drinkers, though not most connoisseurs, consider the style outdated after New Year's, when holiday gift giving and celebrating wind down.

Nevertheless, these beers are often good candidates for laying down for future tastings because of their high alcohol content. Some veteran beer collectors lay down holiday beers for vertical tastings to compare, in one sitting, variations of the same beer from several years past.

It's not unusual to find fruit flavors in winter warmers. Some popular fruits that brewers add are cranberries, oranges, raspberries and cherries. Adding to the warm glow of the Christmas spirit, some beers have one or two spices in them while others may include a wide array of holiday or pumpkin spices such as nutmeg, cinnamon, clove and even coriander.

And very often a winter warmer recipe may call for both fruit and spices. Wheat and honey are popular additions to winter warmers, and they may also contain a myriad of uncommon ingredients; San Luis Obispo (California) Brewing Co.'s Holidaze beer sports refreshingly strong pine characteristics.

Anticipating the annual offering of winter warmers is as much fun as awaiting the opening of presents early Christmas morning -- maybe even more now that we're adults. One of my personal favorites is Samichlaus, Swiss for Santa Claus, the potent beer made in Zurich by the Hurlimann Brewery on but one day of each year. On Dec. 6, Saint Nicholas' Day, a new batch is brewed and the previous year's batch is released. The young batch of this high-alcohol double bock is lagered until bottling time.

Of course, an important part of beer tasting is not only the flavor of the beer, but also the nose, or aroma. But perhaps names of beers play an important role as well. Part of the fun of seasonal beers (or any beer for that matter) is the creative and interesting monikers each brewery tags on its beers.

For example, Stille Nacht, or Silent Night, is a highly recommended strong Belgian Christmas beer brewed by De Dolle Brouwers (The Mad Brewers) in West Flanders. The name rather says "Drink me while trimming your Christmas tree."

Bardo Rodeo brewpub of Arlington, Virginia, serves up Santa's Little Helper during the Holiday season. Who could resist? (If it helps Santa, certainly it could help me.) 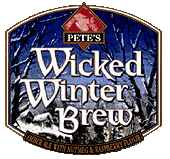 Pete's Wicked Winter Brew made news when the recipe was developed by homebrewer Walter Dombrowney as one of his rewards for winning the Ninkasi Award at the 1993 national homebrewing competition. The recipe calls for raspberries and nutmeg, and the beer is widely available during the holiday season.

This year's winter warmers and holiday beers are waiting for you on retailers' shelves and on draft at brewpubs and ale houses. Remember, part of their charm is that many of the same brands likely won't be taste duplicates of last year. Forrest Gump summed it up best: "Mama always said, 'Winter warmers are like a box of chocolate, you never know what you're gonna get.'"