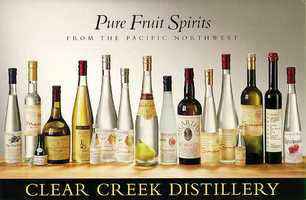 In the market for distilled spirits, dominated by slick, multi-million-dollar ad campaigns for super-premium vodkas and single-malts, eau de vie is nearly invisible. If there's something smaller than a niche market, eau de vie has it sewn up.

Yet for those who seek it out, and are persistent enough to find it, great eau de vie can be an exiquisite experience. After all, there must be some reason why tens of millions of Europeans have incorporated it into their daily rituals of life for the past few hundred years -- as the perfect after-dinner digestif.

And if a pair of first-rate U.S. producers have anything to say about it, someday that same tradition will take hold here.

Fruit in a Glass

The name translates as "water of life," a reminder that the invention of distillation in the 17th century came in pursuit of cures for plagues like cholera. Other, more upbeat uses soon came to the fore, and eau de vie established itself as a distinct class of spirits: clear fruit brandy, rarely touching wood, and usually drunk fairly young. Unlike grape brandy, eau de vie puts the emphasis on freshness, liveliness, and capturing the intense essence of fruit -- rather than on depth, weight, and the complexity that comes from years of interaction between spirit, oxygen and wood.

Put another way, eau de vie is the anti-vodka. The point of vodka distillation is to remove all those annoying flavors; the point of eau de vie is to preserve as much of the original fruit as possible. Vodka is the perfect vehicle for mixed drinks, since it disappears entirely into its surroundings; there is no such thing as an eau de vie cocktail.

The economics of production provide an equally stark contrast. Premium vodka (and gin) can be made from almost any source (surplus grain, potatoes, etc.) for a cost of less than fifty cents a bottle. A quality eau de vie consumes about 30 pounds of first-rate fruit, picked at the moment of peak ripeness. Even though it has to survive in the marketplace, eau de vie is clearly a labor of love. 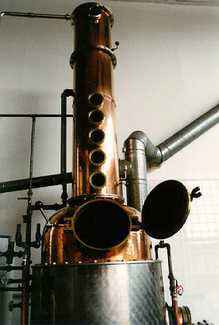 The heartland of eau de vie production lies in central Europe -- the Black Forest region of Germany, Alsace, Switzerland, and parts of Austria and Northern Italy. Fruit brandy production is also common throughout Eastern Europe. The most commmon fruits used are pears (Bartlett, also known as Williams), cherries (bottled as kirsch or kirschwasser), plums (the basis for Yugoslavian slivovitz), and raspberries (framboise). But a vast array of other fruits can be distilled to good effect, and it is a safe bet that every community in the core eau de vie zone will take the pride of its local fruit harvest and cook up a batch. Herbal eau de vie can also be found, especially in Italy.

For all practical purposes, Italian grappa and French marc are simply variations on fruit eau de vie. Here the fruit is partially or fully-pressed wine grapes, but the distillation process is the same, and so is the goal (at least for the good ones): a clear, un-oaked expression of varietal fruit.

Eau de vie production starts with gently crushing the fruit, inoculating with yeast, and fermenting the must for several weeks. The resulting fruit wine is then heated in a still and the vaporized alcohol is cooled back down into a liquid. The spirit is placed in a neutral container (steel or glass) for a few months. Finally, the spirit is mixed with water to arrive at the desired alcohol percentage, bottled and (hopefully!) sold.

Two things seperate premium eau de vie from the ordinary. The quality of the initial fruit, of course, sets the upper limit of the final product. And for distillation, quality producers in Europe and the U.S. favor a particular style of German eau de vie still. The Holstein stills heat the wine gently in a kind of water bath, not with direct heat, thus avoiding the danger of unwelcome caramelized flavors. Even more important, because of the sophisticated cooling apparatus, the whole process can be accomplished in one distilling run -- thus holding on to much more of the precious fruit character. 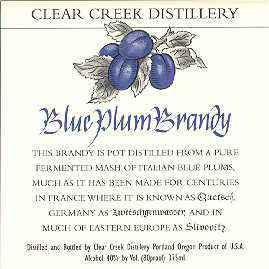 To flog the vodka comparison one last time, "triple distilled" is not a badge of honor in the world of eau de vie.

The small but steadily growing band of eau de vie fanciers in the U.S. is fortunate to have two world-class produers right at home. Alameda, California's St. George Spirits and Portland, Oregon's Clear Creek Distillery both make full lines of eau de vie and grappas that show well in international judgings and have a respectable national following as well. Best of all, these domestic bottlings go for about half the price of their European counterparts.

J–rg Rupf of St. George was raised in the Black Forest and grew up around his family's small-scale distilling operation. After becoming a lawyer and working with the Ministry of Culture in Munich, he fell in love with the San Francisco Bay Area, and eventually decided to try his hand at eau de vie -- since no one else was doing it at the time.

Rupf introduced the Holstein still into the U.S. As part of his emphasis on quality, he throws out the "heads" and "tails" of each distilling run (the first and last parts) and uses only the heart of the run. Some European distillers, even reputable ones, may send all or a portion of the heads and/or tails through a second run, but the result inevitably adds to the level of congeners -- compounds that give cheaper spirits the overtones of fuel, oil, nail polish, soap, barbed wire, etc. 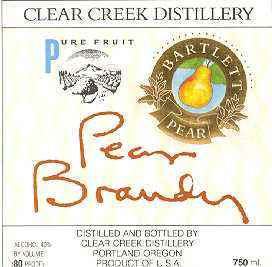 His first release came out in 1984, and he spent several years culitvating a local restaurant and wine shope market in the Bay Area before moving to national sales. Along the way, he has supplemented St. George's income with sales of eau de vie to the commercial confectionery trade and by custom distilling for wineries that want to sell "their own" grappa in their tasting rooms, but don't have the expertise.

St. George offers eau de vie made from pears, plums, cherries and raspberries. All four are excellent, but the framboise has a particular intensity, especially on the nose, that is not to be missed. The line also includes three varietal garppas, from zinfandel, muscat and gewørztraminer grapes. To enhance the fruit characteristics, Rupf's grappas are made either from whole grapes or grapes that have yielded only their free-run juices. In addition, St. George has a "Royale" line of dessert wines fortified with a smaller amount of eau de vie, designated as "starter" spirits for the uninitiated.

Clear Creek's Steve McCarthy also started out as a lawyer, took a swing through Portland and Oregon politics, and eventually found himself running a famly business that supplied parts for hunting rifles. After building it up for a few years, he cashed out and turned to eau de vie, for which he had acquired a taste while traveling in Europe.

To shorten his learning curve, McCarthy initally worked with J–rg Rupf as a consultant. He then set out on his own, and proceeded, by his own admission, to make every dumb mistake in the book -- trying to get too big too fast, hiring staff before he had a way to sell product, and so on. It's a good thing that the gun business had been so successful: it took more than a dozen years to break even with Clear Creek.

For both quality and marketing purposes, McCarthy relies on local Oregon fruit for his brandies. He makes use of a family orchard in the Hood River Valley to make an absolutely lovely pear brandy, as well as a flashy (and pricey) "pear-in-a-bottle" version. The eau de vie line also includes plum, raspberry and cherry and an excellent barrel-aged apple brandy in a Calavados style.

His grappas have been made from muscat, pinot gris, pinot noir, gewørztraminer and nebbiolo. McCarthy also tosses the heads and most of the tails out of his brandies, though he does find the heads useful for scouring equipment. And in an Oregon twist on the herbal eau de vie tradition, he is experimenting with one made from Douglas fir buds. (Don't knock it till you've tried it.) As a skilled distiller, facing a daunting market, McCarthy has recently exercised a perfectly logical option: releasing the first domestic Scotch -- McCarthy's Oregon Single Malt Pot Distilled Whiskey. And J–rg Rupf? He has one of his own in barrel.

But that's another web page....... Meanwhile, satisfy your craving for fresh fruit, and seek out these all-American waters of life. Staving off cholera was never so sublime.