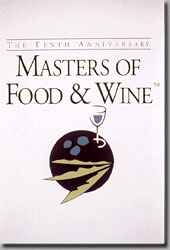 Imagine you're attending an elegant party in a magnificent architectural gem perched above California's coastside Highway One. As you gaze out of the floor-to-ceiling windows, the sweeping vistas of the Pacific Ocean begin to take on a golden hue as the sun sets slowly in the west. The festivities just go on and on.

"Would you care for some more Champagne?" inquires your host who is holding a magnum of Taittinger Brut MillČsime 1989. "Perhaps an elegant German Riesling from the Rheingau or the Pfalz? Or would you prefer a red wine? 1991 La Tache from the Domaine de la RomanČe-Conti or 1978 Ch’teau Pichon Lalande? How about a Three Palms Vineyard Merlot from Duckhorn? We have all the vintages going back to the premier release from 1978. Chianti Classico Riserva or a "Super Tuscan" Cabernet Sauvignon, the Solaia, from Marchesi L & P Antinori? Something sweet to go with your foie gras? Certainly. How about a '67 Sauternes from Ch’teau d'Yquem or an '86 Riesling Trockenbeerenauslese from Weingut Koehler-Ruprecht? We also have a stunning '94 Riesling Eiswein from Weingut Georg Breuer."

While contemplating the wine choices, you munch on scrumptious food prepared by master chefs flown in from all over the world just for the party.

Sounds wonderful, doesn't it? Well, that, in a nutshell, was the tenth annual "Masters of Food and Wine," a six-day epicurean celebration presented by the Highlands Inn in Carmel, California, last February 27 to March 3. And it was wonderful, to be sure.

The Masters is today unquestionably the finest forum for the culinary arts and epicurean pleasures to be found on the planet. Over the ten-year history of the event, rare, intensely sought after and highly coveted wines from the most prestigious estates in Europe and California have been opened for analysis during eminently informative tasting seminars and consumed for pure pleasure in combination with inventive cuisine skillfully prepared by master chefs from all over the world. Significantly, the wines have been presented by the often legendary personalities behind them.

Additionally, there are always entertaining and informative cooking demonstrations ($130, including lunch). This year, on separate occasions, the inimitable Julia Child, television chef Jacques Pepin and Giuliano Hazan, heir to the culinary legacy of Victor and Marcella Hazan, a family whose authentic approach to Italian cuisine is famous throughout the world, laid the groundwork for specially planned luncheons that followed their master classes, where the dishes created in the demonstration were duplicated and served with just the right wines.

For those who wanted to spend some time in the great outdoors, there was a guided hunt for wild mushrooms in Carmel Valley on one particularly beautiful day, where the delectable morsels had been coaxed into appearing following a brief period of rainy, misty weather ($85, including lunch).

Reflecting on the international dimension of the Masters of Food and Wine, David Fink, vice-president and general manager of the Highlands Inn, observed "Each year for six days, we are given a wonderful opportunity to experience the flavors of the world in one incomparable setting. Michelin-star chefs and celebrated winemakers from continents away gather here to share their talents. To all of us, they speak a common language, presenting food and wine as a bridge between diverse cultures and nations."

It is the interaction and intertwining of haute cuisine and great wine over a period of days that set the Masters apart from other events of this kind. The structure of Masters programs offers the greatest opportunity for expanding one's horizons and experience while, at the same time, maximizing the gastronomic pleasure element.

On the "basic" wine level, coveted vintages from some of the world's most famous producers were sampled in a series of wine tasting seminars including: Ch’teau Pichon Longueville Comtess de Lalande (Pichon Lalande for short) with Madame May-Eliane de Lencquesaing presenting "The Grand Tradition of Bordeaux" ($125); Comte Alexandre de Lur Saluces of Chateau d'Yquem leading "A Tasting of the World's Greatest Sauternes" ($175); Aubert de Villaine, co-director of the Domaine de la RomanČe-Conti, offering "A Tasting and Exploration of Terroir" ($175); Marchesi Piero Antinori of Marchesi L & P Antinori with "Tuscan Winemaking Tradition and the New Wave" ($125); "The Great Late Harvest Wines of Germany," hosted by Bernd Philippi of Weingut Koehler-Ruprecht and Bernhard Breuer of Weingut Georg Breuer ($125) and Napa Valley's Dan Duckhorn of Duckhorn Vineyards offering "A Three Palms Vineyard Merlot Retrospective" covering the years from the first release in 1978 to 1991 ($125).

With an elevated appreciation of the wine from the tasting seminars and food "basics" from the cooking demonstrations, the Masters guest is then presented with the fusion of these two ingredients in an awesome array of luncheons ($85 each) and dinners ($130-$200) jointly planned by the winemakers and the chefs flown in from all over Europe and North America. This year, the master chefs included Traci des Jardins (Rubicon, San Francisco), Joachim Splichal (Patina, Los Angeles), Patrick Clark (Tavern on the Green, New York City), Johann Lafer (Hotel Stromberg & Le Val d'Or, Guldental, Germany), Jean-Louis Palladin (Jean-Louis at the Watergate Hotel, Washington, D.C.), Michel Richard (Citrus Restaurant, Los Angeles), Mark Militello (Mark's Place, N. Miami Beach), Nancy Oakes (Boulevard, San Francisco), Nobu Matsuhisa (Matsuhisa, Los Angeles) and Cal Stamenov of the Highlands Inn, among others.

The Highlands Inn offers packages that include two tickets to an individual evening event along with overnight accommodations in an elegant spa suite, which includes a separate living area, wood-burning fireplace, spa bath and private view deck. This year, the packages ranged from $495 for Opening Night to $900 for the Grand Finale Dinner.

These events are usually sold out within a few weeks of the announcement of the schedule. To get on the mailing list to obtain next year's brochure, call the Highlands Inn at 800-682-4811 or 408-624-3801. A memorable experience awaits.