Zinfandel attracts the most loyal and enthusiastic fans of any wine variety in California. The Zinfandel in question is, of course, red wine, although "red Zinfandel" is redundant; there is Zinfandel and then there is white Zinfandel, and only the latter requires a color modifier.

Those who would quarrel with the assertion of Zinfandel's capability to inspire such ardent devotion should consider that, of all the wine varieties available in California, only Zinfandel has an organized consumer fan club.

Called ZAP (short for "Zinfandel Advocates and Producers"), the laudable goals of the nonprofit organization are to promote Zinfandel as a varietal and to encourage its understanding and enjoyment. ZAP's 1600-plus members include more than 92 zinfandel-producing wineries and vineyards, and hordes of consumers who simply dote on Zinfandel. A quarterly newsletter keeps the membership apprised of matters important to the Zinfandel aficionado, such as Zinfandel-oriented winery events and Zinfandel wine tastings, Zinfandel-friendly recipes, Zinfandel producer and vineyard profiles and a members' information exchange service. Contact ZAP on the internet at: http://www.fujipub.com/zap or their non-virtual address: 118 Hillside Drive, Woodside, CA 94062-3521. The telephone number is (415) 851-2319. 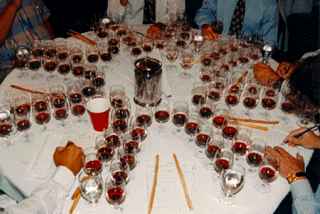 A recent offering from ZAP is a full-color, plastic-coated, dinner-plate-sized "Zinfandel Aroma Wheel" that sells for $5.00, plus $1 for postage and handling. Developed by the same professionals who designed the original aroma wheel in an all-wine context, the Zin wheel focuses on those aromas and flavors particularly characteristic of Zinfandel. For example, where the original aroma wheel took "berry" and particularized the aroma with four fruit scents, the Zin wheel particularizes nine berry scents. With such a tool, the taster can describe Zinfandel just like a pro.

At the Vintners Club, we've noticed over the last couple of years that the Zinfandel tastings attract at least as many members and guests as the Cabernet Sauvignon tastings, and often more. Similarly, ZAP's annual Zinfandel Barrel Tastings attract significantly larger crowds each year. At the fourth annual tasting last January, for example, the organizers prepared for a crowd of about 850 people, a number slightly larger than the previous year's attendance. In fact, more than 1600 fans jammed the event at Fort Mason, turning the public tasting into a genuine celebration of the varietal.

What fuels the passions of Zinfandel lovers is the wine's delicious and aromatic fruit reminiscent of berries, black cherries and plums. More approachable early on than Cabernet Sauvignon because of softer tannins, Zinfandel can be enjoyed with a wide variety of foods, from roast chicken and sauteed duck to pastas, sausages and hearty meat dishes. Given some age in the cellar, Zinfandel takes on depth and complexity, becoming smoother and more elegant in the process.

Joel Peterson, whose Ravenswood Zinfandels have provided a benchmark for the variety since the 1980s, says that good Zinfandel exhibits varietal characteristics. "Blackberries, cherries and raspberries are the three big fruit items in the nose of Zinfandel," Peterson explains. "Beyond that there is the possibility of mint and eucalyptus. There are the vanilla and toasty qualities of the oak. A lot of Zinfandels have spice -- almost a black pepper quality -- in the back of the nose, and certainly that is there in the flavor and finish."

As to the sensations Zinfandel can exhibit as it lingers and then leaves the palate, Peterson is not at a loss for words,

"There is a spicy, cinnamon, almost clove-like finish to a good Zinfandel along with the berry fruit-like qualities and a thickness on the palate. There should also be a fair amount of astringency in the finish, and good Zin should never be heavy on the palate -- it should have enough acidity to bolster it. It should say it's there without huddling in the mouth and without being sharp. Those characteristics are what I would look for in any Zinfandel I produce."

Recently, the Vintners Club sampled and evaluated twelve current-release Zinfandels from Sonoma County, including the sub-appellations of Dry Creek Valley, Sonoma Valley and Alexander Valley. Most of the wines were from the 1993 vintage, an excellent year for Zinfandel, with 1994 promising to be even better.

1993 Scherrer Zinfandel "Old & Mature Vines," Alexander Valley ($15).
Deep aromas of black cherry and berry fruit enhanced by vanilla, oak and clove spice. Concentrated, ripe berry fruit on the palate with medium tannins. Very pleasant now, but should age nicely over the next 3-4 years. I recently found a bottle of this relatively rare Zinfandel on the wine list of Cafe Beaujolais in Mendocino Village for a mere $22. The combination of the Zin with roast leg of McCormack Ranch lamb that had been marinated in garlic and Beaujolais herbs was sensational. Highly recommended.

1993 Hanna Zinfandel, Sonoma County ($12).
Forward, fragrant and appealing scents of fresh raspberries with a distinct black pepper note. Classic Zin flavors of berry and black cherry plus sweet oak and a touch of black pepper. This is a big style of Zin with medium-full tannins and medium-full body, exhibiting excellent balance. Absolutely delicious.

1993 Quivira Zinfandel, Dry Creek Valley ($14)
Jammy, fruity, grapy scents mingled with a fair amount of oak. Generous fruit on the palate, and very slightly tart. At this point in its development, the wine needs food to balance the tannins and tartness.

Lots of American oak almost overwhelms the fruit in the nose, which opens up a bit with time to exhibit notes of rose petals, cinnamon and leather. Claret-like in style with cherry-berry fruit on the palate. Somewhat tart, with a short finish.

Forward, fragrant scents of lightly charred oak and gobs of ripe black cherry-blackberry fruit and a hint of herbaceousness. "Old vines" Zin fruit on the palate that is nicely concentrated, with a touch of black pepper in the finish.

Lots of American oak here, but not to the wine's advantage, resembling pickling spice and dill. The dill comes across on the palate, along with shy berry fruit. Somewhat astringent.

1992 Ridge Lytton Springs, Lytton Springs Vineyard, Dry Creek Valley ($18) .
The winery has determined that the varietals in this vineyard, consisting not only of old vines zinfandel, but also petite sirah, carignan and grenache, are not dominated by zinfandel sufficient to label the wine as varietal Zinfandel (it's less than 75% of the blend). Consequently, it's labeled simply as "Lytton Springs." The 1992 Lytton Springs has shown considerable bottle variation, and on this occasion the wine was dominated by an unpleasant note of acetone in both the nose and flavors. On other occasions, the wine has not shown this flaw.

1992 Pedroncelli Zinfandel, Dry Creek Valley ($7.50)
Plenty of blackberry-cherry fruit on the nose, but the flavors exhibited a bit too much bell pepper-green olive herbaceousness for most of the tasters. This is a wine you either love or hate, and on this occasion the herbal-vegetal characteristics brought the wine down in the group's ranking.