The Indian Wedding, a Modern Marvel

Planning a wedding? Whether you're the bride-to-be, her mother or any other participant, organizer or subsidizer of these complicated, expensive and emotional events, it may help to hear about the wedding I attended last year. Your life will seem, suddenly, simple and uncomplicated, your guest list meager, your catering bill reasonable. 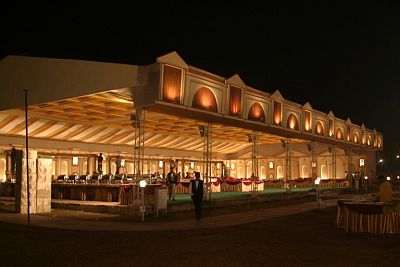 On Nov. 27, 2003, a day picked as auspicious by Hindu astrologers, India's capital city, New Delhi hosted 14,000 weddings. (It hosted the same number again for the next two days in a row!)

Today's urban Indian weddings are a picture of national and international integration. In earlier times brides and bridegrooms would be of the same caste, perhaps the same geographic state and most assuredly the same religion. Modernization of thought and tradition, socioeconomic factors and a prosperous middle class have changed this. And nowhere are these changes more evident than in the wedding feasts. From exotic to authentic, from regional to international, the wedding banquets are truly spectacular. 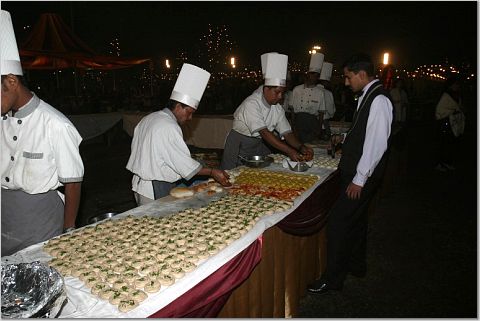 Armed with every single piece of formal clothing I owned, I attended a week-long, 15-event family wedding in Delhi, culminating with the wedding ceremony itself on that very lucky day. Wedding guests, flying in from five continents, swelled to the thousands. (In parts of India, wedding invitations are often addressed to family, friends and even friends of friends. The hosts consider it an insult if you do not bring along a huge group to the wedding.)

Breakfasts, lunches and dinners were seamlessly coordinated for hundreds of people and their chauffeurs and servants. Each event (sometimes there were four a day) required a unique feast and decor not to mention new outfits, shoes, diamonds and other finery for those attending these celebrations. The menus were dictated by the religious theme of the event or the whim of the bride. Chefs and cooks were ferried in from other cities in India, along with their own mobile kitchens, haandis (cooking vessels), enormous tandoors (clay ovens) and troupes of helpers. 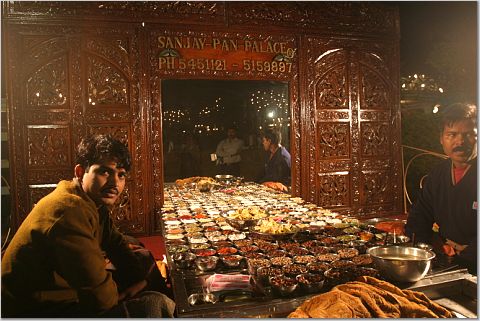 The festivities for this North Indian Hindu wedding began at the bride's home on Saturday, Nov. 22, five days before the wedding, with a prayer ceremony. Hindu scriptures dictate the food for this occasion be free from garlic and onion (known in ancient times as aphrodisiacs) to maintain its purity. The vegetarian menu featured more than 30 choices, ranging from velvety tomato soup tempered with mustard seeds to a creamy peas and almond curry.

The next three nights seemed like one long endless party. At "cocktail dinners" you had your choice of eight different pastas (farfelle to fettucini) topped with five different toppings and served with one of four different sauces (spinach, mornay, mushroom or arabiata). A more adventurous cocktail menu featured the Swiss specialty rosti: potatoes were shredded, sauteed until golden brown and then served with generous amounts of cheese. At another station at the same party, lovers of Indian food could sample Kathal Biryani, a rice dish layered with curried jackfruits, or the Dal Khushk Punjabi, a creamy combination of lentils simmered for more than eight hours. Or (ignoring Dr. Atkins) a guest could head straight to the bread counter for a choice of cumin, mint, butter or even chocolate-laced Indian breads prepared in the tandoor by chefs flown in from the Indian city of Meerut.

The morning of the day before the wedding began with a ritual for women only called kwar dhoti. The bridegroom's sister visited the bride's family with gifts for the bride, including a cup of henna and the first outfit to be worn right after the wedding. For this event, a chef flew in from Punjab to make his specialty -- Indian-style corn bread (Makkai ki Roti) prepared on a griddle and pungent mustard greens (Sarson Ka Saag) served with homemade white butter on the silver platters each guest received as a party favor.

The night before the wedding is reserved for the tradition of henna. The natural dye is used to paint intricate designs on the bride's hands and legs. The myth is that the depth of the color of henna on your hand determines the depth of your mother-in-law's love for you! It is the bride-to-be's last night at home. Traditionally, a mother ensures that her daughter's favorite dishes are on the menu that night, and so we enjoyed deep-fried lotus stem, black chickpeas in a spicy brown sauce served with piping hot Indian balloon bread, warm carrot fudge and cardamom-scented tea.

The wedding, after four ritual-filled events earlier that day, finally arrived. A red-and-gold royal pavilion with lavish seating, gorgeous floral arrangements, buffet tables, silk draped reception areas, bars and dessert lounges had been custom-built at a 50-acre farm. The bride, dressed in a deep red Indian gown, studded with Swarovski crystal, and the groom in a cream Nehru-collar suit, wed in front of 1,500 guests on a stage adorned with more than 5,000 flowers. Four six-foot-long tables were covered with nine different types of Indian dough balls ready for the oven, to be baked fresh at the requests of the guests. Pasta, Mongolian, Mexican, Indian, Continental and Chinese cooking stations provided ample choices. A 20-gallon terra cotta pot, on a slow flame, brewed milk laced with cashews, almonds, pistachios, saffron and sugar -- the choice drink in the bone-chilling Delhi weather.

After the wedding feast, came the wedding reception. For the first time in seven days the menu featured alcohol and non-vegetarian food. The rush to the Teppanyaki cooking station with grilled Japanese food and the salad bar with more than 20 types of salads cued me into what was hot that night. The dessert table served chuski (an Indian version of Italian ice laced with sugar syrup), mille-feuille (the French dessert of puff pastry and cream), chocolate truffle cake and apple strudel. Of course, when 14 cases of Scotch, 12 cases of wine and four cases of tequila are consumed in one night, you can safely assume your guests had a happy night.

As we began to leave the reception, I noticed the mouth freshener table. Yes, the final tables offered the departing guests a sweet token of thanks -- 35 types of mouth fresheners, and the caterer was still adding more choices.

Article first appeared in the Washington Post in May 19, 2004.

Monica Bhide is the author of "The Spice is Right: Easy Indian Cooking for Today" (Callawind Publications, 2001) and "The Everything Indian Cookbook" (Adams Media, 2004). Her Web site is www.monicabhide.com.