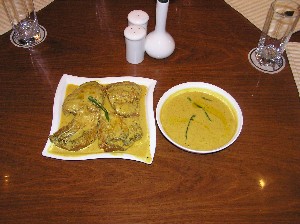 As an Indian cookbook author, I frequently travel to Bombay to explore the depths of its cuisine, especially its irresistible seafood restaurants. Not only is there much to explore, but the prices are reasonable.

My husband, Sameer, and I began our most recent visit at the legendary Goa Portuguesa (Kataria Road in Mahim, near Hinduja Hospital and opposite the post office). It's a charming, if noisy, restaurant that spotlights the food of the western state of Goa, a former Portuguese colony.

I began my meal with an emerald-green raw mango concoction known as panna, while Sameer ordered the strongly flavored Goan cashew wine feni. A wandering guitarist approached our table and serenaded us as we devoured our pan-fried pomfret fish doused in a spicy Goan sauce. As he continued to croon "Yesterday," we relished the deceivingly spicy six-inch fiery red tiger prawns crammed with Goan spices. The final appetizer was Bombay duck, but that was no fowl on my plate. Bombay duck is actually a long, slim fish, and Goa Portuguesa's version was stuffed with minced crab and prawns.

Next came tender slices of coconut and cashews that were sauteed with onions and served in a green coconut shell -- with a money-back guarantee, even (unneeded, as it turned out). Afterward, we savored a delicate fish caldine curry and a vibrant clams masala, which started out sweet before setting my mouth ablaze with heat and tremendous flavor.

Dessert included palm sugar cake and a seven-layer cake made with honey, coconut milk and clarified butter. A definite return-to place, and at $50 for two with drinks, a good deal. 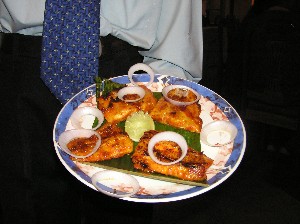 In fact, we did return, but to Goa Portuguesa's next-door sister restaurant, Culture Curry, which showcases seafood from southern India. The tables are lined with loud ads of south Indian movies, while its colorful menu features pictures of flamboyant south Indian celebrities, along with an extensive seafood selection.

As we enjoyed cocktails (ordered off a rather naughtily worded bar menu), the appetizers arrived. A fleshy white fish -- marinated in a special south Indian pepper sauce, steamed in banana leaves and then fried -- had a flaky texture and a peppery finish, while the smoky deep-fried jumbo prawns were the menu's best dish. For the main course, our attentive waiters insisted we try the king prawns in coconut curry and the pomfret in a flaming red tamarind curry, and neither dish disappointed. The flavors were bold, yet they brought out the seafood's inherent tenderness. Hot rice appams, a sort of pregnant crepe, were perfect utensils to scoop up the fish pieces.

For dessert, we opted for the lentil dumplings flavored with cardamom and nutmeg. They were served with a rich vanilla ice cream and rice-flour balls vaguely reminiscent of doughnut holes, and helped round off another perfect meal. Dinner for four, including drinks, was $44. 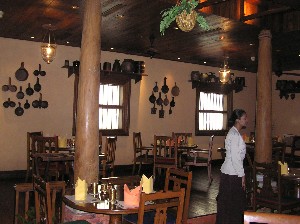 Next up was a breathtaking meal at the Konkan Cafe at the Taj President Hotel (90 Cuffe Parade). Here we felt as though we'd entered a sprawling bungalow in sun-drenched coastal India.

But it was the okra pickles, bitter gourd chutney, unpolished red rice and a coconut-flavored white fish curry that brought on an urge to hug the chef. Then again, so did the tab: Generous portions for four cost around $45, including drinks.

Our final meal was at Oh! Calcutta in the Rosewood Hotel (99 Tulsiwadi Lane). This restaurant, which features charming charcoal drawings on the walls, serves freshwater fish dishes from the eastern shores of India. 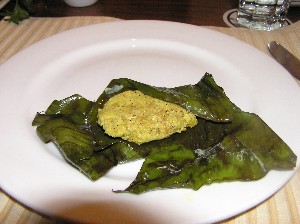 Mustard was the most pronounced spice in the dishes. We loved the "plastic chutney" made of translucent pieces of raw papaya, a velvety coconut-based prawn curry and a fried white fish in a pungent mustard sauce. Crisp balloon breads called lucchi proved the ideal implement to lap up the scrumptious sauces.

Tiny terra-cotta pots housed our dessert, a sweet, tangy and silken yogurt. Dinner for four, including drinks, was $37.

For general information on travel to Bombay: India's Ministry of Tourism, 212-586-4901, www.incredibleindia.org

Monica Bhide is the author of "The Spice is Right: Easy Indian Cooking for Today" (Callawind Publications, 2001) and "The Everything Indian Cookbook" (Adams Media, 2004). Her Web site is www.monicabhide.com.