Artisan Chocolate truffles & the spices that love them: cinnamon 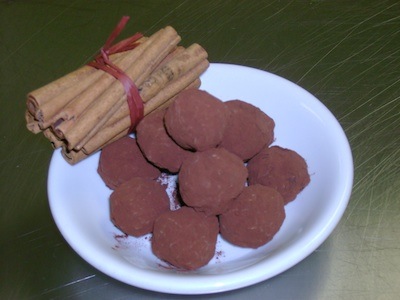 Cinnamon is a very ancient spice with a mysterious and murky history, yet it was known to mankind since before the dawn of recorded history. It is certain that cinnamon was imported to Egypt over 4000 years ago, and It was written of, in the Old Testament of the Christian Bible. Ancient civilizations held this spice in such high regard as to offer it up as gifts to their Gods! It was so valuable, that it's source was kept a closely guarded secret by Indonesian, Muslim, and later, European spice traders, for thousands of years.

"True cinnamon", correctly referred to as Ceylon cinnamon,  is a small evergreen tree, indigenous to Sri Lanka, which is a small island country, approximately 20 miles off the coast of Southern India. There are also several other closely related species, known collectively as cassia. Cassia cinnamon is much darker in color, and has a much more robust, pronounced flavor profile, than it's more delicate and subtle Ceylon cousin. Cassia is also much more widely available, and less expensive than Ceylon cinnamon.  Both Cassia and Ceylon cinnamon are commercially available in small to large sticks of dried, curled bark, called "quills", as well as in dried, powdered form.   As is the case for all spices, it is always worth the extra effort and expense to find cinnamon in its dried stick form, rather than in powdered form, since most, if not all spices, quickly lose their flavor and aroma, after grinding, as their volatile oils dissipate into thin air.

When thinking about pairing your favorite chocolates with ground cinnamon stick, think in terms of overall balance in the final truffle. Despite being an extremely assertive flavor note, cinnamon is an exceptionally well-liked ingredient in both sweet and savory dishes. Most people find cinnamon to be a warm, sensuous and agreeable component to many other flavors. Therefore, you can make your chocolate and cinnamon truffles with white, dark, or milk chocolate, just be sure to add enough cinnamon to the ganache to stand up to the particular chocolate you choose. In general, the darker the chocolate, and the higher the cacao content, the more cinnamon you can add.  For a small batch of perhaps two dozen- 15 gram truffles, I would chop up about 200 grams of milk chocolate into tiny pieces. Then I would add about 80 grams of hot steaming heavy cream, with a good heaping teaspoon of ground cinnamon stick over the chopped chocolate. Let this sit for a moment, and then stir it all together with a wooden spoon or rubber spatula, until its all smooth and melted.......if there are still some small lumps of unmelted chocolate in the bowl, simply place it into the microwave for 5 - 10 second intervals, until it's smooth. (DO NOT OVERHEAT...5-10 second intervals ONLY!)  After the ganache has begun to set, you can use a small spoon to form little truffles. The easiest way to finish these cinnamon truffles is to simply roll them in powdered sugar or some good cocoa!   Share these with someone you love...or someone that you want to love you back!