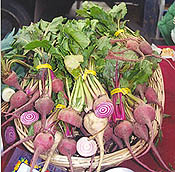 Pity the poor beet. Its virtues have undone it. Lizzie Kander says it all in her 1930 edition of The Settlement Cook Book when she advises the cook to pickle the old beets and can the young ones. At harvest time the beet was too common, too reliable, and too durable to use fresh. Besides, it was a bleeder. Even Jane Grigson, in her Vegetable Book (1978), admits a personal hostility to beets: "With all that purple juice bleeding out at the tiniest opportunity, a cook may reasonably feel that beetroot has taken over the kitchen and is far too bossy a vegetable." Best to tame the purploid bully with strong vinegar or tin cans.

Until the nineteenth century, of course, the vegetables most often grown were those that were the best for storing---by drying, pickling, or preserving in the root cellar. In The Vegetable Garden of 1885, Messieurs Vilmorin and Andrieux advise the gardener to dig up his beetroots by the end of October, build them into "pyramidal-shaped clumps," and cover them with straw and earth for the winter. A root that preserved intact its firm texture and extraordinary sweetness was invaluable as winter food for man and beast, but the fact that cows liked beets did not improve their status on the table.

In Russia, the word "borscht" (which now means any kind of soup with beets in it) originally meant "cow parsnips," or cow beets. In mainstream America, beets became associated at the turn of the century with poverty--- with food for cows, peasants, and Slavic-Jewish immigrants, whose addiction to beet soups turned the Catskills into the "Borscht Belt." Lizzie Kander preserves the strength of this tradition in her recipes for two kinds of "Russian-style" borscht: "Milchik," made with a base of milk, and "Fleischik," made with a meat base. She also includes a number of excellent pickle recipes, from a bossy "Beet and Horseradish Relish" to a sophisticated "Beet Preserves" made with lemons, almonds, and fresh ginger root.

Unfortunately, New England generally followed the English tradition of taming beets in a sweet-sour sauce thickened by flour or cornstarch. In 1896 Fannie Farmer tried to upgrade the dish by giving it an Ivy League name, "Harvard Beets." Yalies, not to be outdone, substituted flour and butter for cornstarch, and orange juice for vinegar, to produce "Yale Beets."

Only recently have we begun to look anew at garden-fresh beets and, with the help of fashionable gardener-chefs like Alice Waters, to grow beets the size of ping-pong balls instead of baseballs. The best cache of beet recipes that I know is provided by Southerners Stringfellow Barr and Stella Standard in The Kitchen Garden Book (1956). They give us such lovelies as "Beets and Sour Cherry Soup,' "Beets in Pomegranate Sauce," and "Beet Souffle."

Cooking beets is best done by either boiling or baking them unpeeled with at least 2 inches of stems left on to avoid excess bleeding. Baby beets are best flavored on ly with butter and a little lemon or orange for tartness. Citrus of any kind has an affinity with the beet because the tartness cuts the sweetness.

In the recipes below I've added citrus and coriander to a fresh beet soup adapted from The Kitchen Garden Book , which is quick and easy because you strain the pulp and don't need to peel the beets at all. I've also made a salad of beets, pink grapefruit (instead of the usual orange), and red onions, served on a bed of beet greens and accented with walnuts. If you're a greens person, as I am, you never throw out beet tops. You cook them instead.
I've also returned to the root world to make a deep pink puree of beets, boiled potatoes, and celery root. The idea of mashing boiled potatoes with beets roasted in ashes in the fireplace comes from The Buckeye Cookbook, printed in Minneapolis in 1883. "This is a New England dish," the Buckeye claims, "and very delicious for harvest time, when beets are young and sweet." Too young and sweet to be bossy, or maybe just so young and sweet you don't care."

Scrub unpeeled beets well. Cut off the tops, chop them, and put them in a large saucepan. Shred the beets in a food processor or on a grater. Add them to the pan and cover with the chicken stock. Bring to a boil, cover, and simmer 25 minutes. Strain the broth and discard the pulp. Add to the broth the vinegar, seasonings, and orange juice. To serve hot, reheat just enough to warm the orange juice. To serve cold, chill well in the refrigerator. Either way, garnish each soup bowl with a slice of orange and a sprig of fresh coriander.
Serves four.

Scrub beets and cut off the tops. Boil them in water to cover or bake at 450 degrees in foil or in a tightly covered dish for 30 to 60 minutes, depending on beet size. Beets are done when the skin wrinkles easily and slips off. Blanch the tops for 2 to 3 minutes in the beet water or in water to cover. Drain well and arrange on a serving plate. Peel beets and slice them very thin. Alternate beet slices with grapefruit sections and onion slices on top of the greens. Sprinkle with the walnuts and pour over them a dressing of the oils, vinegar, and seasonings.
Serves four to six.

Scrub unpeeled beets and potato and cover with boiling salted water in a saucepan. Peel celery root and add to the pan. Cover and boil vegetables 2 to 40 minutes, depending on their size. Peel beets and potato under cold running water. Put vegetables through a food mill, a ricer, or the grating disk of a processor. Add butter, yogurt, and seasonings, and fluff well.
Serves four.