Blueberries: "A Most Excellent Summer Dish" 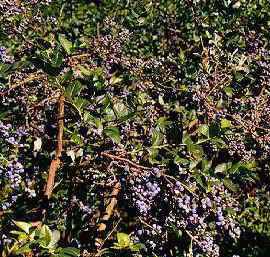 The wild berries he found in the New World, John Josselyn called "sky-coloured billberries." They were bluer than the bilberries or whortleberries of his native England, he explained in New England’s Rarities (1672). "The Indians dry them in the Sun and sell them to the English by the Bushell." The English colonists used bushels of the dried berries in place of traditional currants in their puddings, gruels, and fruitcakes, and in summertime they doused fresh berries in sweetened spiced milk or sherry for "a most excellent Summer Dish."

Wild berries are often wildly named. In the west country of England the bilberry, for which Josselyn mistook our native blueberry, was also called "whortleberry" or "hurtleberry" for its blue color, which reminded some of "hurted" or "bruised" flesh.

In America the names hurtleberry and whortleberry were conflated into "huckleberry," another wild blue that is close kin to the true blueberry (a member of the Vaccinium family). Huckleberry , as we all know, later came to personify American wildness and the name stuck. Imagine how different the course of American literature and lives would be if Twain had written The Adventures of Whortleberry Finn.

It was the blueberry, however, and not the huckleberry that botanists hybridized at the beginning of this century to produce many cultivated varieties of highbush berry, with names like Earliblue, Late Blue, Blueray, and Bluetta. And it was the cultivated blueberry that the New World sent to the Old in 1946 in the form of eight highbush plants to be nurtured in Dorset, England, formerly the heart of whortleberry country. So new still are these Yankee berries to English greengrocers that boxes of Dorset blueberries are accompanied with recipes printed in "bilberry-purple ink." Or so Jane Grigson noted in her 1985 British Cookery, wherein she suggests using blueberries in that quintessentially English dish, Summer Pudding.

The first English colonists put blueberries in their traditional puddings of fruit and dough, but as the English language turned American, so did pudding names. "Grunt," "buckle," and "slump" reveal the self-mockery of Yankee humor. "Buckle" or "slump" usually referred to fruit covered with biscuit dough and baked in the oven. "Grunt" was the same fruit and dough steamed in a pudding mold. Typical of more high-toned recipes for blueberries were the batter breads and cakes provided by Eliza Leslie in her 1837 Directions for Cookery. Her "Huckleberry Cake" is really an early form of blueberry muffin, spiced with molasses, cinnamon, and cloves, and poured "in a buttered pan, or into little tins." Maria Paloa, in her 1872 Appledore Cook Book, used blueberries for an English trifle she called "Appledore Pudding," layering blueberries with stale cake splashed with wine and topped with meringue.

Recipes abound for good ways to use summer blueberries. I like to mix blueberries with raspberries or cherries in a compote which also makes a good non-soggy filling for a prebaked tart shell. I do hate gummy crusts or cornstarch thickeners and both nasties can be avoided by using fresh fruit combined with fruit jam.

I’ve also turned back to the Indian tradition of drying berries, which helps today’s cultivated blueberry recapture some of the intensity of its wild relative. Drying berries is easy. Just spread a single layer of berries on a number of baking sheets and put them in a sunny spot for 4 or 5 days, or bake them in a very low oven(150 degrees) for 4 or 5 hours. Berries fully dried will keep indefinitely in a plastic bag or glass jar. Dried berries plump up in any liquid, so they are particularly good with kasha, wild rice, or other grains.

In the recipe below I’ve recalled English tradition in a classical blueberry summer pudding, letting the juice of berries and currants, if you can get them, soak into slices of good white bread, topped with heavy cream, which you may be able to do without but I can’t. No way. 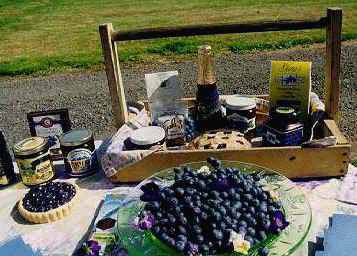 Trim the bread slices so that you can completely line (without gaps) a glass or ceramic bowl, to use as a mold. Heat the blueberries and currants with the sugar until juice begins to ooze.

"Real sky blue," Robert Frost called the wild berries of New Hampshire, which absorbed the smoke of cleared and burned woods in the bloom of their skins and the flavor of their flesh. "It must be on charcoal they fatten their fruit," Frost writes. "I taste in them sometimes the flavour of soot." One way to discover New England’s rarities today is to do as the Indians did. Make an excellent summer dish by garnishing grilled fish and meats with sky-colored, soot-flavored blueberries.