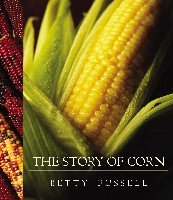 The ABC’s of Mexican cooking all begin with C: Corn, Chili, and Chocolate, or cacao. These three ingredients provided the building blocks for one of the world’s oldest and most fascinating cuisines.

Corn began in Mexico, in a region near Oaxaca, at least five thousand years ago and because of its versatility as a food it was always more than a cereal staple like wheat or rice. It was also a vegetable. Ears could be roasted in the fire or steamed in earth ovens. Kernels could be dried whole and reconstituted or ground into coarse or fine meal. The meal could be baked into thin breads (tortilla) on a clay griddle (comal) over the fire or wrapped in husks (tamale) and steamed in a pot (olla). The meal could also be drunk as a beverage when mixed with water or other liquid (atole).

But this corn cuisine became highly sophisticated by what was added to the corn---extraordinary flavorings like chili and chocolate---so that whenever you ate corn, you ate corn plus. Of course chili peppers were also vegetables, which could be roasted fresh and stuffed, but principally they were dried and ground on the metate, along with the corn. Cacao beans were similarly roasted and similarly ground, along with the chili.

The three ingredients formed a flavor triad that identifies the base of Mexican cuisine, combining the natural sweetness of corn with the fragrant heat of chili and the bitter of chocolate. Anyone who’s experimented with chili heat knows that anything sweet moderates and compliments it, just as bitter counters and compliments both hot and sweet.

But the Mexican cuisine we know today is criolla, the fusion cuisine that developed when Spain added its ingredients and procedures to those of the New World. One of the most important products that Spain brought in were oranges from Seville, which added a citric tart to the combination of hot, sweet, and bitter.

I’ve combined these four flavors in what is basically a New World pound cake, to which I’ve added toasted pumpkin seeds for texture and tequila for moisture, not to mention a little mescal kick. I make it in a bundt pan or a spring-form pan or a couple of loaf pans. Because the cake is dense and full of flavor, I cut it into small servings and accompany them with fresh orange slices that have been drizzled with a little honey. If you wrap the cake well and refrigerate it, it will keep for weeks. Like a love affair, the combination of hot, sweet, bitter and tart mellows as it ripens.

1. Preheat the oven to 350 degrees and prepare a bundt pan or 9-inch spring-form pan or two 9-inch loaf pans by buttering them and sprinkling with flour.

2. To make the syrup, melt the chocolate over very low heat with the other syrup ingredients, stirring until smooth. Set aside.

3. For the batter, cream the butter and sugar in an electric mixer, Add the eggs one at a time and beat until light and fluffy. Add the orange zest and juice and beat again.

4. Mix the dry ingredients together and stir them into the egg mixture. Fold in the pumpkin seeds. Add the chocolate syrup with a rubber spatula and lightly streak the syrup through the batter to make a marbled effect.

5. Pour the batter into the prepared pan. Bake for 1 to 1 ½ hours, or until a cake tester comes out clean. Cover the top of the pan loosely with foil for the first half hour, then remove foil to let the top brown. Cool the cake in the pan for at least 15 minutes, then invert onto a platter.

6. Prepare the glaze by heating the marmalade until syrupy. Remove from the heat and stir in the juices and liqueur. Pour the glaze over the cake. When the cake is fully cool, wrap it in foil and refrigerate. When ready to serve, sprinkle the top with a thick layer of powdered sugar. Surround with fresh orange slices.