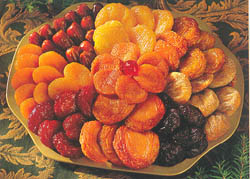 The plum Jack Horner thumbed from his Christmas mince pie had no more to do with plums, or prunes, than had the Christmas plum pudding that Bob Cratchit declared "the greatest success achieved by Mrs. Cratchit since their marriage." So ancient is the use of dried fruits in festal winter dishes that the English names for these fruits have become as minced as the ingredients of English pottages, puddings, and pies.

"Plums" in Christmas plum puddings are neither plums nor prunes, but raisins and currants. England's medieval pottages, which combined meats or fish with dried fruits and exotic spices, relied heavily on raisins and currants because they were the cheapest of imported fruits. When wealthy Elizabethans began to upgrade their Christmas pottages by importing prunes from Spain and France, the word "plum" gave class to stews and puddings that had naught but raisins and currants. To compound confusion, if "plum" usually meant raisin, so too did the word "currant." "Dried currants" bear no relation to the red, white, and black berries of the currant bush that make jelly for the English and creme de cassis for the French. In the context of dried fruits, currants are very small raisins originally imported from Greece, where the name "raisins of Corinth" was corrupted to "currant."

Englishmen had no reason to distinguish names or fruits too nicely, as all manner of fruits, fresh and dried, went into their puddings for flavor and nutrition. When John Josselyn wrote An Account of Two Voyages to New England (1674), he encountered Massachusetts Indians gathering wild berries to mix "into Indian boyling Puddings, for variety in the English manner." So too Jacques Cartier discovered Canadian Indians cultivating plums and drying them in order to have a supply of prunes for winter stews.

Sun-drying is the oldest form of preserving, but when sugar became cheap enough for common use, fruits were often candied as well as dried. The Cook's Own Book (1832), "by a Boston Housekeeper," instructs fellow housekeepers to dry apricots by first cooking them in syrup, then putting the stewed fruit upon dishes to dry "in the sun under garden glasses."

Few Bostonians today would bother to dry apricots, since the sun in California does that for them. Ancient Persians called apricots "sun eggs" and Spanish mission fathers, as early as the eighteenth century, found the sun of California congenial for apricots, along with figs and dates. As a California child, I took such fruits for granted, not knowing that California had become the principal source of dried fruits for all of the States and much of the world. So abundant were these fruits in our backyard that I assumed everybody squished ripe apricots between their toes in summer and threw green dates in winter, to annoy passing motorists, the way children elsewhere might throw snowballs.

Through its dried fruits, California links ancient Persia to medieval England and modern Morocco. Any dried fruit is a gift of the sun that intensifies its flavor, so that to eat a nugget of dried fruit in a bread, a stew, or a tart is to eat a nugget of sunshine in the midst of winter's barrenness. That may be why the Welsh created a speckled bread, Bara Brith, with raisins, currants, and apricots, that was a favorite of Cornish miners working the lead mines of North Cardiganshire, who needed all the sunshine they could get.

Dried fruits go with nuts, particularly apricots with almonds. Since the apricot kernel has the flavor of bitter almonds, traditionally the pitted apricot fruit was preserved with a few crushed kernels to supply that flavor, but the custom is gone today when people are more worried about their teeth. In the tart recipe below, I've combined three of my favorite flavors -- apricots, almonds, and raspberries -- with one of my favorite textures, the delectably creamy cheese called mascarpone.

To redeem the reputation of dried prunes, too long associated with the pharmacy rather than the kitchen, I've plumped prunes with brandy (as one might do dried figs) to mix with other fruits or to spoon over vanilla ice cream. Martha Washington, in her Booke of Cookery (1749), put prunes in a "Plumb Broth" made of beef or marrow bones, bread, sugar, raisins, and currants and colored with sandalwood. This was the upgraded medieval pottage that evolved into Christmas pudding. Perhaps Martha's husband, George, at some Christmas feast, honored the prune in Martha's broth by declaring it "the greatest success achieved by Mrs. Washington since their marriage."

Put apricots in a small pan, and add rum and water to barely cover. Stew gently until liquid is nearly evaporated. Cool. Spread jam evenly over the bottom of the tart shell. Cover jam with the mascarpone, cover this with the apricots. Top with the almonds.

Split the vanilla bean into quarters and combine with the remaining ingredients. Place them in a pint jar with a tight lid.
Let stand in a cool place for 2 weeks, turning the jar upside down occasionally to keep the prunes immersed.