Hail to the Garlic Revolution 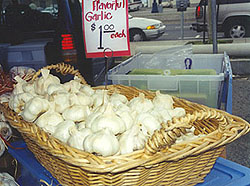 One of the most permeating of America's many revolutions in the 1960s was the garlic revolution. I can remember the dark years of the 1940s, when garlic was thought to be subversive of our American way of life and only the daring risked more than a quick rub of the salad bowl with a cut garlic clove. Back then, to eat a loaf of garlic bread was an act of bravado and to eat a garlic-laden spaghetti sauce was an act of liberation.

In the 1950s, however, Elizabeth David established a beachhead in England by publishing, in her Mediterranean Cooking, no less than a garlic manifesto. In the 1960s, James Beard and Julia Child mounted a two-pronged attack on the American heartland. So complete was their triumph that by the 1970s California's culinary bolshies, headed by Alice Waters, were roasting whole heads of garlic at Chez Panisse and staging all-garlic dinners, which began with garlic soup and ended with garlic sorbet. Today garlic is as much a staple in American pantries as it ever was in ancient Egypt, Greece, and Rome. Like them, we've discovered that garlic is not only one of the world's tastiest foods but that it is good for us. European herbals have always listed garlic as a tonic and a stimulant---to aid digestion, prevent liver trouble, and defeat hypertension. French herbals also consider garlic an aphrodisiac. I've often wondered whether Colette, who lay abed chewing garlic cloves the way Americans chew gum, was improving her health or her amatory prowess. 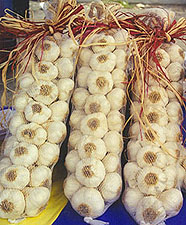 I joined the garlic revolution with my first bowl of garlic soup, which I made from Elizabeth David's recipe (below), despite my fear that she was spouting nonsense when she assured us that with garlic, as with other things, more is less. A whole head of garlic (as in James Beard's Forty-Garlic Chicken), lessens rather than increases garlic's pungency. Garlic in quantity proves to be not only mild and sweet in taste but as nourishing and filling as protein. With a poached egg on top, garlic soup can be a three-course meal.

After a summer in Provence, I became such a seasoned garlic trouper that I could take in stride that powerful combination of garlic and olive oil the locals call aioli (French for garlic is ail). Aioli spells Provence the way sunflowers spell Van Gogh, and I learned to spoon garlic mayonnaise on everything from fresh vegetables to eggs, shrimp, cod, boiled potatoes, chicken salads, steak, and pasta.

Best of all, I learned to thicken fish broth with aioli to make the triumphant fish stew of Provence called bourride. As traditional as bouillabaisse, a good bourride is much easier to make, particularly now that the food processor makes short work of what was once done laboriously by mortar, pestle, and whisk. You can make a frothy and creamy bourride in seconds, just as quickly as you can make that other once-difficult Provencal garlic and fish dish, brandade de morue. The brandade was so popular in Nice when we lived there in the 60s that a pound of it was delivered fresh to our door every Friday by the local brandade maker. In Provence, fish on Friday means garlic fish.

Needless to say, for any of these dishes, fresh garlic is essential. Throw out those dried, withered, or sprouting cloves. Throw out also that old garlic press you might have bought in the 1960s in the first flush of garlic enthusiasm. A press reduces the sweetest clove to fiber and liquid. Instead, take a heavy knife like a cleaver, place your unpeeled cloves on a chopping board, and mash them with the side of the knife. You can then easily remove the peel and mince the cloves.

Today, most of America's garlic is grown in Gilroy, California, home of an annual garlic festival that rivals the renowned festival of Marseilles, where garlic braids and wreaths still hang from every roof. Garlic, it seems, has forged another link in that ancient Franco American alliance that links the Marseillaise to the Star Spangled Banner and the chicken salads of the Fourth of July to the bourrides of Bastille Day.

Separate the cloves of garlic and put them, unpeeled, into a saucepan with the chicken broth. Cover tightly and simmer 1 hour. Strain the broth into another pot and slip off the garlic skins when they are cool enough to handle. Saute the onion in the butter, oil, and seasonings until soft. Put the garlic, onion, and 2 or 3 cups of the broth into a blender, process until smooth, and combine with the rest of the broth. Heat briefly to blend flavors. When ready to serve, float a slice of toast and a poached egg on top of each bowl of soup.

Make a bouillon of the wine, half and half, fish broth, seasonings, and onion. Simmer about 10 minutes in a pan large enough to hold the fish fillets in a single layer when you add them. Add fish and, if needed, more broth or wine to cover the fish. Cover the pan and barely simmer 4 to 7 minutes, or until fish is just tender. Pour the liquid off into a saucepan. Add a little of the hot liquid to the mayonnaise to thin it, then beat in enough of the remaining liquid with a wire whisk to make a foamy sauce. Pour the sauce over the fish. Boiled white potatoes make a good accompaniment.

Put the garlic cloves with the mustard, salt, pepper, egg, egg yolk, and basil in a blender. Blend a few seconds. While the blender is on, add ¼ cup of the oil, blend thoroughly, then add remaining oil slowly in a thin, steady stream until the mayonnaise thickens. Add lemon juice to taste.