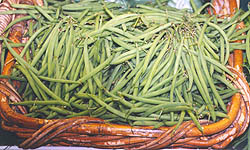 Our great-grandmothers called them "French" beans because that's what the English called them. The French called them "Aztec" beans, turning the Nahuatl word of the Aztec,ayacotl, into haricot to distinguish these canoe-shaped beans from the only bean Europe had ever known before the discovery of America, the broad or fava bean. Amazingly, all the world's beans, except for the broad bean, originated in the New World. The green beans that we eat pod and all when they are young were cultivated 7000 years ago in Mexico, so by rights we should call them "Mexican" beans.

My grandmother called them "string" or "snap" beans. From her I learned to top the stem end, zip the string down one side of the furry pod, nip off the tail, zip the string up the other side, then snap the bean in two. Two strings and one snap per bean, while we sat on the porch, the bean bowl between us, listening to "Vic and Sade" on our Zenith radio. My children learned to string beans while watching "Leave It to Beaver" on TV, but by then we were down to one string and no snap because we served them whole. Their children, it seems, will never know the joys of stringing or snapping because today we pick beans younger and we breed them without strings. Today we also import from France those costly fetal beans no bigger around than strings.

"French beans must be young and tender," Louis Eustache Ude admonished the English in vain in his 1828 The French Cook. "The fruiterers and green-grocers of this country sell them by the hundred when they are unfit to eat." They were unfit when they were old enough to string or snap, and English and American cooks of the 19th cetnury advised their readers of the social consequences of unfit beans. Mary Randolph, in The Virginia Housewife (1824), stole the very words of a popular English book called The Cook's Oracle (1822), when she discriminated fit from unfit persons by their beans: "For common tables, they are split, and divided across; but those who are nice, do not use them at such a growth as to require splitting." Americans who were more inventive than nice devised the first cast-iron hand-powered bean splitters and slicers.

As the French developed the best varieties of garden bean, so they devised the best recipes for them. One of my favorites is a simple green bean salad served at room temperature and dressed with walnut oil and chopped walnuts, which I ate decades ago in the restaurant of Paul Bocuse. In summer, I vary it by mixing in other beans, such as fresh limas, flageolets, or tender yellow wax beans.

The classic French way with young beans was to dress them with butter and cream. Hannah Glasse popularized this dish in England in the 18th century as a "ragoo" of beans, which Eliza Acton a century later called "An Excellent Receipt for French Beans a la Francaise" (in her 1861 Modern Cookery), and the American Eliza Leslie (in her 1852 New Receipts for Cooking) called them "Stewed Beans (French Way)." Today we've become so accustomed to eating our beans plain and almost raw that a French sauce of cream and lemon, thickened by egg, seems like a startling innovation.

The green beans we call "Italian" are somewhat broader and flatter than the "French" ones, and they stand up well to a hearty dressing of pesto sauce in summertime, when basil inundates the garden and the cook. Pestoed beans are as delicious hot as cold, and you can turn a salad into a meal by adding sliced boiled potatoes, hard-cooked eggs, red onions, ripe tomatoes, and chunks of creamy mozzarella.

My grandmother would have been offended by beans too young to snap or string, and she would have boiled them for no less time than it took to reduce the accompanying lamb or beef to strings---say 2 or 3 hours. Today, we prefer crunchy beans, so we steam our tenderest ones for a mere 3 to 5 minutes or boil them in their youthful prime for 8 to 10 minutes. To 3 quarts of water I add 1 1/2 tablespoons of salt per pound of beans, then drain the beans quickly and run them under cold water to retain their crisp texture and vivid green. But my grandmother was not into crisp and vivid. She would have thought such beans as barbaric as the Aztec and as decadent as the French, and she would have wondered where all the strings had gone, along with Vic and Sade.

Parboil the beans 3 to 10 minutes, depending on age and size, in boiling salted water. Drain, rinse with cold water, and drain again. Mix oil, lemon juice, salt, and pepper, and pour the dressing over the beans. Sprinkle the top with walnuts. Serve at room temperature.

Parboil the beans as above and drain. Soften the onions in the butter in a skillet. Add the flour and cook 2 to 3 minutes over low heat, stirring the while. Beat the egg yolk into the cream and whisk the mixture into the butter and flour. Season to taste with lemon juice, salt, and pepper. Let the sauce thicken slightly, then add the beans and mix well. Garnish with the chopped herbs.

Parboil the beans as above and drain. Make a pesto sauce by pureeing the oil, salt, garlic, basil, parsley, and nuts in a blender or food processor. Add the cheese and blend again. Dilute as needed with a little more oil or a very little hot water. Toss the sauce with the beans and serve at room temperature.