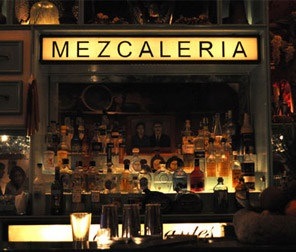 Now that margaritas have washed as far north as Alaska and as far east as Harry’s Bar in Paris, it’s time to look for the next wave of good drink from Mexico. At the top of the crest I’d put boutique mezcal. During the margarita craze of the last couple of decades, we who love tequila (preferably aged and drunk straight with a squeeze of lime on the fist topped with salt) learned that tequilla is but one expression of the wide wide world of mezcal.  And today in Mexico,  artisanal mezcals, which you sample in big-city bars called mezcalerias,  have really taken off. 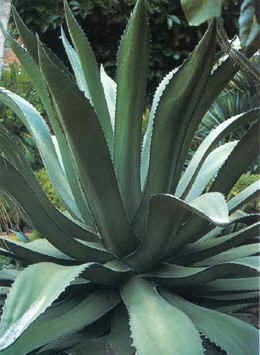 Mezcal distills the literal heart of the agave, that silvery green plant we call the “century” because it takes forever (about 8 to 10 years) to flower and harvest.  Only it’s not allowed to flower. Instead, the farmer hacks off the flower stalk once it begins to grow so that all that sap will swell its bulbous heart. When he cuts off spikes and roots, the heart looks like a pineapple, or piña.   To make tequila, the producer quarters and steams that heart to squeeze out the juice, which he then distills.  To make mezcal, he slowly bakes the whole heart in an earth-oven heated by a wood fire, which gives a smokier, sweeter, richer taste to the mash.

Fermenting agave (or any plant with sugar in it) is as old a process as making beer out of corn or wine out of grapes. But the distilling process was brought to Mexico by the Spanish, who turned peasant  pulque (naturally fermented agave sap from the whole plant, not just the heart)  into a more highly refined and alcoholic libation  fit for sophisticated city dwellers.

Originally “tequila,” named for a real village, meant a special mezcal designating quality. It was limited to a single variety (the blue agave) and grown and processed in a single place (largely the western state of Jalisco).  But as the world took to tequila, the product became commodified. Bulk tequila need be only 51% agave and the rest can be mixed with water and sugar, as the foreign bottler decides. (100%-agave tequila is required to be bottled in Mexico).  Good tequila, like good mezcal, improves with age,  and is labeled reposado (the best is aged 9 months) and anejo (usually aged 3 to 4 years). If it’s good flavor you’re after, rather than dilute it in a cocktail, take it straight.

But what most of us love in a margarita is that flavor trio of lime, salt, and liquor. Thus begins the romance of pairing a shot of mezcal with a michelada chaser.  Michelada  has long been a favorite refresher drink in Mexico, but now that mezcal has taken on airs, so too has michelada as it crosses the border to cool cocktail bars. 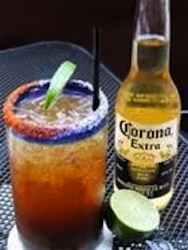 The basic formula of a michelada is beer and lime juice, with an added kick. I favor a dash of tomato juice to evoke a Bloody Mary mix and a slightly red color.  I also use whatever hot sauce or chili sauce I have on hand, but  proportions are classically simple. Sip and savor is the way to go. A sip of mezcal, a glug of michelada, and turn up the mariachi on your iPod.

Betty Fussell is a food historian, home cook, author, English professor and freelance writer. Her book, The Story of Corn, was reprinted by University of New Mexico Press. Fussells' memoir My Kitchen Wars, was transformed into a one-woman show performed in New York City and Hollywood. Fussell latest book is a history of American beefsteak titled Raising Steaks: The Life and Times of American Beef.