The Smell of Parsley 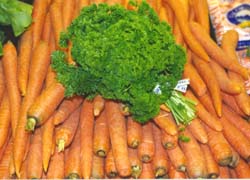 When Emily, transported to heaven in Thornton Wilder's play Our Town, is asked what she misses most on earth, she says, "the smell of parsley." It's hard to imagine life without parsley.

Parsley apparently was growing wild in the Mediterranean basin about the time man was. Parsley is to the Western world what coriander (sometimes called Chinese parsley) is to the Eastern, an herb so common and pervasive that like other ordinary things-----spring and youth and small towns like Grover's Corners---we miss them only when they're gone.

I always grew two kinds of parsley in my garden---the flat-leafed kind the grocers call "Italian" and the curly-leafed kind, which for Americans seems to be the only way a cooked salmon or turkey can appear in public without looking nude. I made no headway with a third kind grown for its roots rather than leaves, the turnip-rooted parsley that looks like a skinny parsnip and tastes like celery root. As a lazy gardener, I owed a lot to parsley because the plants lasted two years without replanting, and because all winter long I could step outside, brush the snow off, and snip a green and curly top. 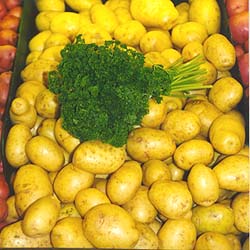 Medieval herbalists found all kinds of parsley as useful in medicine as in food. The seventeenth-century Nicholas Culpepper prescribed a paste of parsley seed and root, mixed with fennel, caraway, burnet, and saxifrage, for "the jaundice, falling-sickness, the dropsy, and stone in the kidneys." Parsley was also a major ingredient in the green garden pottages of the Middle Ages and the pureed green garden sauces of the Elizabethan Age, when they were called "Garden Sass."

Because parsley is so often minced, the herb has developed its own line of kitchen hardware and impassioned ritual. For years I refused to use the efficient hand-cranked Mouli parsley grater because I liked the ritual of scrunching sprigs of curly-leafed parsley together and chopping them with a knife, either the old-fashioned double-handed chopper or a Chinese cleaver. I liked the ritual of cutting flat-leafed parsley with a pair of scissors. I know a Hollywood dowager, once a silent film star
accused of murdering her lover, who fired her housekeeper for not mincing parsley fine enough. And I have a friend so obsessed with parsley that he keeps a mini spin-dryer exclusively for drying parsley leaves and a special rolling chopper for cutting them.

Despite our constant use of parsley as a garnish, we neglect it as a vegetable. On a hot spring day it makes a fine cold soup, a salad, or a sauce for thin slices of smoked tongue, ham, or beef, not to mention poached chicken and fish. Deep-fried it makes delicious finger food to serve with shellfish. And for a one-dish vegetarian meal, there's always tabbouleh, which returns chopped parsley to its origins in the Middle East.

When we're tempted to take parsley too much for granted as our commonest garden herb, we might remember the moral pointed out in Beatrix Potter's rhyming tale:

Wash parsley, remove the stems, and spin-dry the leaves. Mince leaves by hand or in a food processor. Meanwhile bring stock to a boil, add rice and simmer, covered, about 15 minutes, or until rice is tender. Beat eggs with the lemon juice, stir in some of the hot broth, then add egg mixture to the pan and whisk rapidly over very low heat for a minute or two (higher heat will curdle the eggs). Off heat, add parsley and yogurt to taste. Refrigerate until wanted. (This soup is also good hot).
Serves 4 to 6.

Remove stems from parsley and put leaves in a covered steamer about 45 seconds to barely soften them. Refrigerate immediately to crisp. Make croutons from the bread cubes by sauteing them with the garlic in 2 to 3 tablespoons of the olive oil until brown. Mix remaining oil with vinegar and pepper, mix parsley with crumbled feta cheese, and sprinkle croutons on top.
Serves 4.

Make sure parsley leaves are thoroughly dry. Drop a handful at a time into oil heated to 370 degrees F. in a wok or deep skillet and remove the leaves quickly, after less than a minute, with a slotted spoon. Drain leaves on paper towels. They should be crisp and green. Sprinkle lightly with salt. Serve as a garnish or a finger-food snack.
Yields about 2 cups.