What is so maddening as a day in summer when baskets of apricots, cherries, peaches and plums are all in the market at once and clamor to be eaten on the spot? There’s only one solution to the summer fruit problem and that is the sugar solution.

As salt preserves meat, sugar preserves fruit. After sugar became available in the 18th century to commoners, rather than remaining an exclusive perq of the nobility, cookbooks devoted large sections of their pages to “sweetmeats.” These were sugary delights based largely on fruits and flowers preserved as marmalades, conserves, pastes, candies, syrups and jellies. Martha Washington, in her 1749 Booke of Sweetmeats, instructs the cook “To Preserve damsons and other plums or Apricocks to keep all ye year in a quackeing Ielley.” 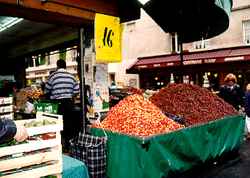 Not a bad idea. Preserving whole fruits in a quaking jelly is a good way to halt nature’s decay. Another way, once popular, was to turn fruits into liquor, to create dainties like peach shrub, plum brandy or cherry ratafia. Yet another way was to turn fruit into “leather” by boiling sugared fruit to a paste, which was then dried in sheets and cut in fancy shapes. The simplest way was to “stove” fruit by coating it in syrup and drying it slowly in the oven or in the sun.

When gardening and cooking were twin branches of the same art, a “fresh” fruit dessert often meant one prepared from fruit previously stewed in a little sugar. “Always stew the fruit before placing it in a pie or crust,” warned Mrs. Seely in her 1902 Cook Book, because you may then drain off any excess juice. Only later in the century did cooks resort to the unfortunate device of adding flour, cornstarch or other nasty thickeners to absorb the juice of uncooked fruit piled into an uncooked crust.

I prefer to thicken juice by the traditional way of heating fruit in small quantities (a pound at a time) with a nearly equal quantity of sugar (but never more than a pound) to release the natural pectin that helps fruit jell. This way you intensify fruit flavor, whether you want to ladle the jelled fruit over fresh ricotta or fold it into a thick cream or layer it into a cooked pie crust.

In the recipes below I’ve folded fresh raspberry jam (there can never ever be enough fresh raspberries) into crème fraiche, scented with that heavenly raspberry liqueur, framboise, to make a dessert as luxurious as it is simple. I’ve also made a sour cherry pie (as in the song my grandmother used to sing, “Can you bake a cherry pie, Billy boy, Billy boy?”) to fill a crisp nut crust with whole cherries preserved in a “quakeing” jam. Because cherries are low in pectin, you’ll need to add some fruit high in pectin like plums, currants or quince to make the syrup jell.

Of course you can adjust sweetness or tartness of any of these jams or jellies by balancing sugar with lime or lemon juice. As always, let your own individual sweet tooth be your guide as you dive into all those clamoring baskets of sun-baked apricots, cherries, peaches and plums.

Combine half the berries with the sugar in a saucepan and simmer, stirring until the juice thickens enough to make a jellied blob when dropped from a spoon. Pour the jam into a bowl and let it cool. Fold 3 or 4 tablespoons of the jam into the cream and place in the bottom of a glass bowl. Cover with the rest of the berries and sprinkle with the framboise.

Pit the cherries, cover them with sugar and let stand overnight. Bring the fruit to a boil in a saucepan and simmer about 10 minutes. Remove the cherries with a slotted spoon and reserve. Add lemon juice to the cherry syrup. Cut the plums into pieces and add them, including skins and pits, to the syrup. Simmer about 30 minutes, or until the syrup begins to jell. Strain and pour into a jar. Just before serving, fill the pre-baked pie shell with the cherries and spoon jelly over the top.

Combine the pulverized nuts with the flour, salt and sugar. Cut the butter into cubes and work it into the flour with your fingertips until the pieces are pea-sized. Beat the vanilla into the egg and add it to the flour mixture. Press the dough into a mound, wrap it with plastic and chill it overnight in the refrigerator. When ready to bake the crust, press the dough rapidly into the bottom and sides of a 9-inch pie pan and flute the edge. Prick the bottom with a fork. Line the dough with foil and fill it with beans or rice to keep the shell from shrinking. Bake at 375 degrees for 5 to 7 minutes, or until the dough is set. Remove the foil, prick the shell again, and continue baking until golden, 10 to 15 minutes more.