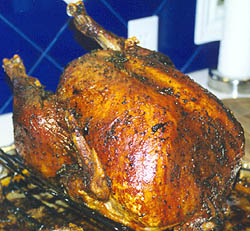 I like to think that one of the main topics of conversation between Chief Massasoit and Governor Bradford at their first Thanksgiving party in 1621 was how best to cook a turkey. England had been cooking turkeys for a good century before any Pilgrim set foot in Plymouth, thanks to Cortez and other conquistadors, who took the large dew-lapped birds, domesticated by the Aztecs, home to Spain. England liked to put these big birds into Christmas pies or display them as magnificent centerpieces in their full array of feathers, as they did peacocks and swans. Massasoit, on the other hand, probably preferred his turkeys roasted on a spit, especially if they were the thirty-to-forty-pounders common in the wild of his time.

The problem with wild turkeys old enough to provide meat of that poundage was toughness. Governor Bradford, accustomed to boned turkey well spiced and baked in a quantity of butter in a thick pie crust, might have muttered some version of the rhyme,

"Turkey boiled is turkey spoiled
And turkey roast is turkey lost,
But for turkey braised
The Lord be praised."

Braising wild turkey even today, when most weigh no more than six to twelve pounds is the best way to guarantee that the bird's flesh will be moist and tender instead of dry and tough. Braising is also a good way to cook any small domestic turkey under twelve pounds, because roasting is apt to dry out the white meat.

Even in the American wild, turkeys were also stuffed, because large birds served as convenient pots for smaller birds and game, as well as for porridges and pottages, vegetables and fruits. Fashionable stuffings for turkeys in the England our Pilgrims left behind included bread crumbs mixed with minced meat, herbs, dried fruit, crystallized oranges, and such spices as cloves. Lacking these delicacies in the New World, Pilgrim cooks would most likely have turned to native grain, to turkey corn, to stuff their turkey cocks. We know that Massasoit's brother, Quadequina, brought popcorn to the first Thanksgiving and that the colonists called it 'parching corn' or 'rice corn.' Since Indians were accustomed to grind popped corn as they did fresh and dried corn, its' not unlikely that colonists sometimes used ground popped corn instead of corn bread in their stuffings.

At any rate, today's popcorn, ground in a processor or food mill, makes an unusually delicious stuffing for birds wild or tamed because it keeps its crunch, while absorbing flavors and juices. Try it with a small braised turkey, capon, duck, or goose and you'll discover that if the Pilgrims didn't use it, they should have.

Braising benefits birds other than turkeys. Wild birds that you shoot on the wing may be tough and braising will tenderize them. Domesticated game birds, such as farm-raised pheasant and squab, although tender, are sometimes dull and lack the flavor that braising can impart.

Brillat-Savarin, after his famous turkey hunt in the woods near Hartford, Connecticut, in the early nineteenth century, braised his quail by wrapping them en papillote, and braised his squirrels in Madeira. As for the wild turkey he had shot, Brillat-Savarin confesses that where his thoughts might have been occupied with the speech of his American host in praise of independence and liberty, they were not. Instead, all the way home he had something quite different on his mind: "I was considering how best I should cook my turkey."

Lightly stuff the neck and rear cavities of the bird and season the skin with salt and pepper. In a casserole with a lid, melt the butter and saute carrots, onion, and seasonings about 5 minutes. Add the turkey, breast up, and baste it well with the butter and vegetables. Add hot broth and wine, cover tightly, and bake at 325 degrees for 1 1/2 to 1 3/4 hours, or until a meat thermometer registers 165 degrees. Pour off broth and vegetables. Run turkey under the broiler a few minutes to brown the breast and thighs. Remove excess fat from the broth and puree broth and vegetables in a blender for the turkey gravy.

Pop the corn in hot oil in a large covered skillet. Grind the popped kernels in a food processor. Soften the onion, celery, and parsley in butter. Add the ground corn and season to taste.