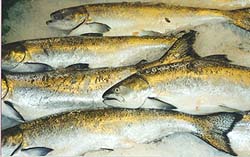 One of the glories of spring and summer seafood is wild-caught king, or chinook, salmon from the Pacific Northwest. King salmon (chinook is the official species name, but most everyone in the fish business uses king) is the biggest, most valuable, and for my money the best-tasting of the six species of Pacific salmon.

Pacific salmon have been in the news a lot in recent years, and most of the news is not good. With all the headlines about endangered-species listing for various salmons, one might get the idea that wild salmon is in danger of disappearing. That's only partly true; many salmon stocks are in serious danger, but others are in robust health, especially in Alaska.

For conservation purposes, including protection under the U.S. Endangered Species Act, Pacific salmon and trout are identified by "stock" as well as by species. All king salmon, which range from central California to northwest Alaska, belong to the same species, Oncorhynchus tshawytscha. However, each individual fish belongs to a smaller group, born in a particular stretch of a particular river at a particular time of year.

Over the millennia since the last Ice Age, when the mountains, valleys, and rivers of the Pacific Coast took their present shape, each river and creek, with its unique water flow and streambed shape, has been an agent of natural selection, and the salmon and trout that spawn there are the offspring of those most genetically suited to those conditions. Because salmon return unerringly to their river of birth to spawn, they do not cross-breed with other stocks, so each stock has evolved in isolation and represents a unique and irreplaceable slice of the overall species gene pool.

This specialization makes each stock vulnerable to the slightest changes in its environment. A dam may block the upstream migration, so adults never reach the spawning grounds for which they are genetically programmed. Erosion caused by agriculture, logging, or grazing can cover the vital spawning gravel with silt, preventing eggs from hatching or choking the larvae that hatch. Water diversions that reduce the flow of cold water or removal of the trees that shade the river may leave the water too warm for
eggs or fry to survive.

Because each adult salmon makes only one spawning run in its life and then dies, each failed spawning season means a good chunk of the gene pool is lost forever. Three or four years of spawning failure in a row is all it takes for a given stock to become extinct, as has happened to many West Coast salmon stocks. In California, for example, a dam built on the San Joaquin River in the late 1930s completely cut off that river's spring chinook run from its spawning grounds, and within a few years the stock was extinct.

The same thing has happened to many salmon stocks in the Columbia River system, despite the construction of fish ladders and other means of getting around the dams.

Some salmon stocks have survived major habitat alterations. On the Sacramento, winter-run chinook (a threatened stock under the ESA) can no longer reach their historic spawning grounds above what is now Lake Shasta, but they are barely hanging on in limited spawning habitat below the dam.

On the other hand, the fall chinook run on the same river, which always spawned in the main stem of the river below the dam, was less affected. Fall Sacramento chinook remains the healthiest salmon stock in the Lower 48, and the one on which the California's commercial salmon fishery is based. With greatly restricted seasons on king salmon in Oregon and Washington, a fair amount of California salmon has been "exported" to the Northwestern market in the last few years.

The situation is much better in Alaska, where most of the rivers still run free. So far, Alaska king salmon stocks seem to be holding steady, capable of supporting good-sized, sustainable fisheries. Although they
are the least numerous of Alaska's salmon, kings command the highest price per pound for their rich flavor and high fat content (in salmon just as in beef, fat equals flavor). The high fat content and large size of king salmon -- fish over 20 pounds are common -- are adaptations to spawning runs that which may go hundreds of miles up the bigger rivers.

Two of Alaska's largest king salmon fisheries occur in late spring and early summer, when the fish are caught in nets at the mouths of rivers as they prepare to spawn. Copper River kings, which peak in supply from mid-May to early June, have gotten an enormous amount of press in recent years, especially in Seattle, though some cognoscenti prefer the even larger kings from the Yukon fishery a few weeks later. In addition to these net fisheries, trollers, especially in southeast Alaska, bring in a small but very valuable catch of hook-and-line kings throughout the year.

While there are lots of ways to cook king salmon, it's hard to improve on the most basic -- grilling fillets over an open fire, preferably charcoal. I usually don't bother with marinades, just a simple seasoning
with salt and pepper. If you feel the need for a sauce, melt a little butter with dill or tarragon leaves and season to taste with lemon juice, or make a garlicky vinaigrette with chopped basil. For a low-fat alternative, try an Indian-style yogurt raita flavored with ginger and cardamom seed.

The ideal cut of salmon for grilling is a diagonal slice about 3/4 to 1 inch thick, cut from middle or the head end of the fillet. I prefer to use skinned fillet, as I still find it hard to get the skin off the grill in
any presentable form. Steaks are also handy, though a bit harder for your dinner guests, who have to deal with the skin and bones at the table.

Prepare a moderately hot fire in a charcoal or gas grill; set up the coals with hotter and cooler zones. Clean the grill well with a wire brush and preheat it thoroughly.

Cut the fish, preferably on the diagonal, into 4 portions no more than 1 inch thick. Season lightly on both sides with salt and pepper. When the fire has reached the glowing-coals stage, lay the salmon pieces skin side up over the hottest part of the fire, perpendicular or diagonal to the grill bars to minimize the chance of sticking. Cook until lightly browned and grill-marked, lifting the whole fillet with the edge of a long-bladed spatula and turning to finish cooking on the cooler part of the fire. (If the fish sticks when you try to turn it, wait a few seconds longer and try again; sometimes it just needs to cook a little more on the first side before it releases.)

Cook until a thin skewer easily slips in and out of the center of the fish (try this first on the raw fish, and compare the way the fully cooked fish around the edges feels). Transfer to plates, first-cooked side facing up.