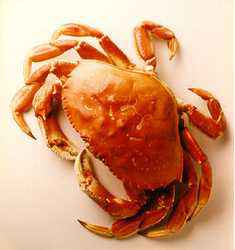 San Francisco's Fisherman's Wharf is a landing spot for many kinds of seafoods, but a glance at the big sign overlooking the tourist parking lot (or at the smaller signs posted around the city pointing the way to the wharf) gives a clue to which is most important. Both signs feature the distinctive shape of Dungeness crab, one of the treasures of the West Coast fish market, and the symbol of the Golden Gate fishing industry.

Most of the year, but especially in winter, the air around the wharf carries the scent of crabs boiling in large outdoor pots, to be sold in walk-away crab cocktails, or taken home to serve as simple cracked crab. Inside the nearby restaurants, they may be combined with other seafoods in a thick tomato-based stew called cioppino, or as chunks of crab meat heaped on top of a salad with Louis dressing. A few blocks away in Chinatown, dozens of fish markets and restaurants keep crabs alive in saltwater tanks until the last minute, ready to be steamed Cantonese style with ginger and scallions or stir-fried with black bean sauce.

Native to coastal waters from southern California to the Aleutians, Dungeness crab (Cancer magister) is the main commercial crab species south of Alaska, with important landings in nearly every fishing port north of Santa Barbara. It's a fairly large species, weighing about a pound and a quarter apiece in the minimum legal size (6-1/4 inches across the carapace, or upper shell) and running up to about 3 pounds. Most of the catch is consumed close to home, but some gets shipped to other parts of the country both fresh and frozen.

On much of the West Coast, Dungeness crab is a winter fishery. Around San Francisco, the season usually begins in November, and cracked crab is as much a tradition at some Bay Area Thanksgiving tables as turkey. (Most of the catch from the Golden Gate south occurs in the first few weeks of the season, and the rest of the year more of the crabs sold at Fisherman's Wharf arrive by truck rather than by boat.) Farther north on the California coast, the season opens in December and typically peaks in January. Oregon and Washington crabbers generally fish longer into the spring than their California counterparts, while in British Columbia the peak season doesn't even start until April, and it's mainly a summer fishery in southeast Alaska.

It's hard to beat Dungeness crab in its plainest form, just plucked from the shell and eaten with good bread and white wine. But there are plenty of other ways to use the delicious meat, often in combination with other seafoods. The recipe here is a dish that is found, with regional variations, all over the Atlantic and Gulf coasts. A seasoned crabmeat mixture serves as the "stuffing" (actually a topping) for fish filets that are variously baked or broiled.

I like to use a hybrid cooking method, placing the fish in a preheated skillet and then placing the skillet under the broiler, so the fish cooks from both sides at once. You will need a large skillet with a heatproof handle so it can go under the broiler. Nonstick is a definite plus, as delicate flatfish filets might fall apart if they stick, but well-seasoned cast iron will do. A 10-inch skillet is just barely large enough to hold the fish in a single layer; a 12-inch pan is better.

This recipe will work with any medium-sized flatfish, such as Pacific petrale sole or starry flounder or smaller specimens of East Coast winter flounder (lemon sole). Other fish of the same general shape can also substitute for flatfish; try farm-raised tilapia or smaller filets of orange roughy from New Zealand. More compactly shaped fish like tilapia mean both the fish and the crab layer will be a bit thicker; set the broiler rack a little farther from the heat and adjust the cooking times accordingly.

If you cook your own crabs or buy whole cooked crabs with the intention of picking out the meat, figure on a yield of approximately 25 percent. For this recipe, which calls for 1/3 pound of meat, that means a whole crab of about 1-1/3 pounds. Check the price of already picked meat; it may turn out to be the same price or even cheaper.

The common name of Dungeness crab comes from the town of the same name on Washington's Olympic Peninsula, which in turn was named after a point on the English coast near the strait of Dover. Perhaps coincidentally, the waters off southern England are home to a close cousin of Dungeness crab, the European common or edible crab (C. pagurus); to this day one of the most memorable seafood meals I have ever enjoyed was a whole one of these served cold in a village pub outside Salisbury, along with a mug of West Country cider. Another close relative on the American side of the Atlantic is the Jonah crab of New England and eastern Canada (C. borealis), which is near enough to Dungeness in quality that my local fish market sometimes brings it in from Maine in summer, when Dungeness is scarce. I wouldn't hesitate to use either variety of crab as a substitute in this or similar recipes.

Heat the oil in a small skillet and cook the onion, garlic, and mushrooms until the mushrooms release their liquid; continue cooking until nearly dry. Let cool slightly, then combine with the crabmeat, mayonnaise, and cracker crumbs. Season the mixture to taste with seafood seasoning.

Season the fish filets lightly with the seafood seasoning and spread a thick, even layer of the crab mixture on top of each. Dust the tops with paprika if desired. Heat the broiler and heat a large skillet (nonstick or lightly oiled) over medium heat. Place the fish in the skillet, then immediately run the pan under the broiler. Cook until the tops are lightly browned and the fish is opaque around the edges, about 5 minutes. Check the center of the fish for doneness with a thin skewer or toothpick (insert the tip for a few seconds, then immediately touch it to your lips; if it is quite warm, the fish is done). If necessary, return the pan to the top of the stove to cook a bit more from below. Serve with lemon wedges.