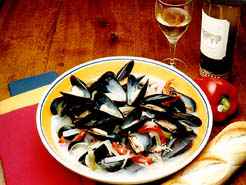 Oysters and scallops may have a more glamorous reputation, and clams may be a popular favorite, but among the bivalve shellfish, cultured mussels get my vote for the best value for your seafood dollar.

Where I live, the retail price of live mussels is about the same as for small clams, from three to four dollars per pound. But where clams yield only 25 to 30 percent of their weight in meat, the thinner-shelled mussels can contain as much as 60 percent edible yield. The flavor of mussels is also superior (to my taste) to that of clams -- more complex and oysterlike.

Mussels were one of the first success stories in North American aquaculture, and remain one of the most reliable cultured shellfish. Most of the production comes from eastern Canada (especially Prince Edward Island) and Maine, with other large farms in Washington State and a smaller amount in California. The farming technology comes from western Europe, where cultured mussels have been enjoyed for decades. Most farmers here use the "rope" or "raft" culture typical of northwest Spain, in which small mussels are seeded on heavy lines which are suspended in coastal bays. The mussels require little attention as they feed on drifting plankton, and harvesting is a simple matter of pulling up the lines and stripping off the mussels.

Mussels of the genus Mytilus occur all over the coasts of the northern temperate zones. Depending on who you talk to, the various mussels farmed in North America are either three distinct species, three subspecies of the same species, or simply geographically isolated races of the same species. How much genetic difference between two populations constitutes a subspecies rather than a race is a subject of constant debate in scientific circles. Taxonomists generally fall into one of two camps: the "splitters," those who favor increased differentiation into species, and the "lumpers," who tend to toward larger, more comprehensive species, often consisting of many subspecies or races. Rather than join one side or another, I will simply refer to three mussel types: the blue, Mediterranean and Baltic.

The mussel most widely cultured in eastern North America is the common or blue mussel (M. edulis), named for its solidly blue-black shell. This species occurs naturally on both sides of the Atlantic from near the Arctic Circle to the Carolinas and the Mediterranean. In the southern part of its European range, it overlaps another type, a paler-shelled mussel found in the Mediterranean Sea and the southwestern coasts of Europe. Some authorities place the Mediterranean type in a separate species, M. galloprovincialis.

On the Pacific coast, the native M. californianus was joined a long time ago in the wild by blue mussels of the "Baltic" type, classified by some as M. trossellus. The browner-shelled Mediterranean type arrived somewhat later, probably introduced via the water in ship ballast, and has established itself in the wild in southern and central California. Among other locations, it favors offshore oil platforms, where it can produce a substantial crop.

The Mediterranean mussel is also easy to farm, and it offers a distinct advantage to Northwestern mussel growers. Oddly enough, given the names, the Baltic mussels are susceptible to dying on a large scale in winter, but the Mediterraneans survive the winter temperatures just fine. But an even bigger advantage for the Mediterranean has to do with its spawning cycle, which influences eating quality.

Like other bivalves, mussels are in their best eating condition during the six months or so preceding their spawning season, and at their poorest during and just after spawning. Spawning time varies by species and location, with the eastern mussels and the Baltic type on the West Coast spawning in early summer and offering their best quality from late fall through spring. Mediterranean mussels, on the other hand, spawn in winter, and are in their prime in the summer, just when the others are pulled off the market.

One might expect farmers to "plant" both varieties to ensure a constant supply, but Washington's two largest mussel farmers specialize in one or the other; Penn Cove, on Whidbey Island, features the Baltic type, while in southern Puget Sound, Taylor United is focusing on the Mediterraneans.

Other choices for summer and early fall mussels include two varieties from the southern hemisphere, which are in prime midwinter condition when it is summer in the United States. The best known are the large, strikingly colored greenshell mussels from New Zealand, which are tasty but a little big for my tastes. A relative newcomer is a Chilean variety, similar in appearance to eastern blue mussels.

Like all bivalves, mussels must be cooked alive. While the mussel is alive, it has its own defenses against bacteria. Once it dies, however, bacteria can grow quickly to dangerous levels. So the first step in mussel cooking is to inspect the batch for any dead ones. It is normal for some of the mussels in a batch to be open, but they should begin to close when handled. Sometimes when they are very cold they will react slowly. If you press the shell closed, it may spring back slightly, but if it re-opens all the way, it is likely to be dead, so throw it out.

Once you have determined that your mussels are alive, they need to be cleaned. Sticking out of one side of the shell is a bundle of fibers (the "beard"), which must be removed. Pulling off the beard with sharp tug is quicker and more thorough than trimming it with scissors, as is sometimes recommended. If the outside of the shell is dirty (most farmed mussels are quite clean), scrub it clean with a stiff brush or a plastic scouring pad and rinse under running water.

All this takes longer to describe than it takes to do; in fact, you can combine all the steps. Simply dump the whole batch of mussels into the sink, and one at a time test the mussels, debeard and rinse them. A couple dozen mussels shouldn't take more than a few minutes to clean and sort this way.

Mussels are used to being out of the water up to half of the time, and they can be kept alive out of water for a week or more. They need cool, moist conditions, but they cannot stand in fresh water for long without dying. For best results store them in a bowl or tray in the refrigerator, covered with a damp towel or wrapped in damp newspaper to prevent the cold air of the refrigerator from drying them out.

The simplest way to enjoy mussels is steamed open in a little flavorful liquid. Wine or beer are traditional choices, but you might also experiment with dry apple cider. Lambic or Gueuze, tart-flavored Belgian wheat beers, give a distinctive flavor.

Place the mussels in a saucepan or deep skillet with the wine or beer and onion. Cover, bring to a boil, and cook until most of the shells are open, 3 to 5 minutes depending on the variety. Transfer the open ones to a serving bowl and cook the rest another minute or two. If they do not open, discard them. Swirl the butter into the broth and pour it over the shellfish, leaving the last bit behind in the pan to trap any grit. Serve with crusty bread for dunking in the broth.