Oysters: "Grand Cru" on the Half Shell 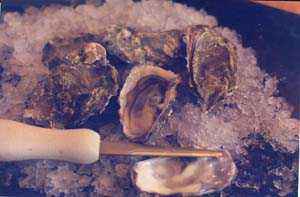 For decades, most of North America's most famous oysters came from the Atlantic or Gulf coasts, and were known by geographic names such as Apalachicola, Wellfleet, Malpeques, or most famous of all, Blue Point. But quietly at first, and more dramatically in recent years, the center of oyster harvest has been shifting westward. Today, the biggest oyster-growing state in the U.S. is not Louisiana, Florida, Virginia or Massachusetts; now that distinction belongs to the state of Washington. Together with the neighboring province of British Columbia, and to a lesser extent California, Oregon, and southeast Alaska, Washington is home to the continent's largest concentration of oyster farms.

As the output from these farms continues to grow, an increasing share of the oysters are being identified with a geographic specificity that would delight a Burgundian wine merchant. These days a well-stocked oyster bar might offer half a dozen different varieties raised within a 20-mile radius in Washington, with names like Little Skookum, Steamboat Island, Eagle Creek and Hamma Hamma. And for every one they carry, their shellfish wholesalers could probably supply two or three other place-named oysters from other nearby farms.

All these oysters belong to the same species, the Pacific or Japanese oyster (Crassostrea gigas). So why are they sold under such a bewildering array of names? Because the taste of an oyster depends on the water conditions where it is grown out to market size, and no two oyster beds enjoy exactly the same conditions, any more than two vineyards growing the same grape variety will have precisely the same soil content, drainage, and sun exposure.

Part of the reason for more specific place names is financial. A bottle of Chablis from a single vineyard rated Grand Cru or Premier Cru sells for more than "ordinary" Chablis, a pattern repeated throughout the wine world. And while there is no equivalent here to the French government's system of classifying vineyards, certain oysters from specific sites have developed a "grand cru" reputation for quality in the marketplace, to the point that they can command a premium price over their near neighbors.

Pacific oysters are raised in estuaries, those incredibly productive zones where fresh and salt water meet and mix. Twice daily, the tides flow in and back out, carrying ocean plankton inland and organic nutrients from the land outward. The oysters just sit there and feed on this bounty, which varies from place to place and year to year. The precise mixture of fresh and salt water, nutrients, water depth, temperature, and tidal flow makes every creek mouth, inlet, bay, and bar unique, and gives a potentially unique flavor to the shellfish grown there.

Most of Washington's oyster production takes place in the Puget Sound area, either in the many branches of the Sound proper or in various protected bays in the San Juan Islands or alongside the Strait of Juan de Fuca. A lot of the growing takes place on Hood Canal, a 60-mile-long saltwater inlet on the Olympic Peninsula side of Puget Sound that illustrates the growing specificity of Washington oyster growing and marketing. Starting at the mouth and moving inland, one passes the entrance to Dabob Bay and Quilcene Bay, then Fulton Creek, the Hamma Hamma River, Jorsted Creek, and Eagle Creek. The canal takes a sharp bend eastward at Annas Bay and passes Sisters Point. Every one of these locations has produced a site-named oyster, which might be marketed under its own name or lumped together with oysters from other nearby farms in a larger batch simply labeled Hood Canal.

Site-specific marketing of oysters has both advantages and disadvantages. Imagine a hypothetical oyster farm about midway up Hood Canal at the mouth of "Mallard Creek." On few acres of subtidal land leased from the state, grower Sue raises oysters from thumbnail-sized seed to market size in wire mesh bags set on racks a foot or so off the bay bottom. Like other "rack and bag" oysters, Sue's oysters typically have delicate shells with a deep cup and a frilly edge. This particular site produces oysters with a moderately meaty texture, a flavor that tends more to the salty than the sweet, and an aftertaste faintly reminiscent of watermelon.

Most small farmers like Sue do not market their oysters directly, but sell them through the shellfish wholesaler up the road. From the wholesaler's point of view, combining Mallard Creek oysters with Dabobs, Quilcenes, and others under the general Hood Canal label makes a certain amount of sense; the larger the area covered, the more you can count on having some stock to sell, and your customers can go ahead and print "Hood Canal oysters" on their menus.

On the other hand, customers who buy oysters under a broadly labeled brand never know exactly what they are getting, and the size, color, and flavor of what are ostensibly the same oysters can vary from one batch to the next. Of course, the wholesaler looks for a certain consistency of quality, but when a brand name can cover oysters from dozens of sources, one can never count on getting the same thing next time around.

Rather than sell into a combined label like Hood Canal, Sue may insist on a separate identity for Mallard Creek oysters all the way through the distribution system, in hopes of developing a following and commanding a premium price. Some oyster bars pride themselves on having the largest possible selection, favoring the site-specific approach over the regional label. Establishing a separate identity is not easy, however; it takes time, and a lot of free samples, and it means more trouble for the wholesaler in keeping your oysters separate from the rest. All of these added costs must be recovered in the price, which means selling the consumer on the idea that this oyster is a little bit better than the rest. Still, all it may take is one high-profile restaurant or oyster bar getting behind her product, or having them mentioned by name in an influential restaurant review, to put Mallard Creek on the map.

The subtle distinctions among different oysters can best be appreciated raw, on the half shell. You can make the tasting as analytical as you like, from comparing a couple of varieties to ordering one of everything. Keep the additions minimal -- a squeeze of lemon, or perhaps a bit of mignonette sauce (minced shallots, dilute vinegar, and fresh pepper), maybe a few drops of Tabasco if that's your pleasure. But if you are going to start loading the oysters up with cocktail sauce and other condiments, you might as well go for whatever oyster is cheapest.