Not an "R" Month? Enjoy These Oysters Barbecued 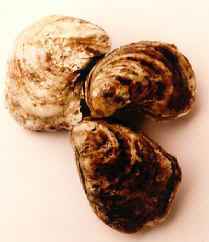 From late fall through spring, I can think of no better way to enjoy oysters than raw, on the half shell. But in the warmer months, for a variety of reasons, I prefer them cooked. In northern California where I live, the favorite summertime method for cooking oysters, whether at a bayside restaurant, at a picnic ground, or in the back yard, is "barbecued" -- cooked in the shell over a charcoal fire until they pop open, then in the half shell, with a dollop of sauce added to each one.

Although it has nothing (other than a live fire) to do with barbecue as a cooking method for meat, barbecuing oysters has its own set of traditions, and inspires similar passions about what should and shouldn't go in the shell with the oyster. For some, barbecued oysters don't taste right without the standard tomato-and-horseradish seafood cocktail sauce or their favorite barbecue sauce; to others, these bottled condiments are anathema. About the only ingredients everyone seems to agree on are garlic and butter.

For years, I had always used the same method of barbecuing oysters: set them on the electric barbecue grill right side up, that is, with the deeper cup-shaped valve (valves being the proper name for the shell halves) down. When the heat of the fire causes the shell to pop open, remove the oyster from the grill and use an oyster knife to pry off the upper valve. The problem was, there was often as much as a tablespoon of near-boiling water in each shell, which would have to be poured off or it would dilute the sauce (not to mention the danger of scalding the cook!) Eventually I figured out to keep a small bowl next to the grill, and to tip the shell and pour out the water before finishing the shucking step.

A couple of years ago, a northern California oyster grower told me about a better way. Lisa Jang, who grows oysters on Tomales Bay north of San Francisco under the Bay Bottom Beds brand, used to sell hundreds of barbecued oysters every week at an evening farmers' market in Santa Rosa, and they cooked them upside down. "We had lots of people, including local chefs, stand there and tell us we were doing it all wrong," she says, "but we had lots of happy repeat customers who can vouch for our method."

Well, add me to the list of those who say that upside down is the way to go. When oysters cook with the flat valve down, a couple of good things happen. First, when the oyster begins to open, the excess water spills out onto the fire, so you don't have to deal with it any more. (To keep the water from damping down the fire too much, Jang suggests starting with a hotter than usual fire.) Also, the flat valve absorbs the brunt of the heat, so the cupped valve is a little cooler when you turn it over and add the sauce, and is less likely to overcook the oyster.

Live oysters are available all year in most fish markets and supermarket seafood counters, and an increasing share of the nationwide market is going to Pacific oysters. Washington, which passed Louisiana some years ago as the largest oyster-producing state, produces the lion's share of the West Coast oyster harvest, and they grow them pretty big up there. The most common size, the so-called Medium with a shell length of around 5 inches, is a bit too big for my tastes. Given the choice, I'll take the 3- to 4-inch Smalls every time, even if the price is the same, and they are sometimes cheaper. (The dainty, perfectly shaped oysters favored by the half-shell trade will certainly work, but they are more expensive.)

If you live near an oyster-growing area, you might be able to buy oysters at the source, or perhaps at a local farmers' market. But by far the least expensive way to buy them in quantity is directly from a seafood wholesaler; call ahead to see if any in your area will sell them to the public on a "cash and carry" basis. A sack of 60 oysters is a typical pack, but the exact size, count, source, and price will vary from one distributor to another.

Whether you use the normal or the top-down cooking method, shucking a partly cooked oyster is actually easier than shucking a raw one. For beginners, laying the oyster cup side down on a sheet pan and laying a hand on top is probably easier than holding it in your palm. Using a heatproof oven mitt, an old potholder, or an old kitchen towel folded three or four times to protect your free hand from both heat and cuts, find the pointed hinge end of the shell where the top valve begins to hook downward. Place the tip of an oyster knife against this spot, then push, wiggle, and otherwise probe for a gap. When you find it, work the tip in just far enough that you can twist the knife and pop the valves apart, then cut the meat free from the top valve. If you don't have an oyster knife, a small clean screwdriver or a "church key" can opener will do for prying off the top shell, but you will still need a knife to cut the meat free.

Once the top shell is gone, all that remains is to add a little sauce and return the oyster to the heat until it is cooked to your taste. Beyond the basic garlic butter, sauces for barbecued oysters can be as varied as you can imagine. My current favorite is a fresh Mexican-style red or green salsa, but fruit-based salsas, Chinese black bean sauce, mignonette sauces with or without herbs, and Thai-style curry mixes with coconut milk are all possibilities. So are bottled barbecue sauce or seafood cocktail sauce, if you insist.

Serving barbecued oysters can be as formal or as informal as you like. If the oysters are small enough to be eaten in one bite, you can just pick up a shell (once it cools off a bit) and nudge the contents into your mouth with a free finger, oyster bar style. Medium or larger oysters are usually two- or three bite affairs, which makes them knife and fork food.

Part of the reason I prefer oysters cooked in the summer has to do with seasonal changes in the oysters themselves, which have to do with their reproductive cycle. Summer is the normal spawning season for Pacific oysters in their home waters on the coast of Japan. Oyster growers can get touchy about the subject of spawning, pointing out that most West Coast waters are too cold for the oysters to spawn in most years. True enough, but that doesn't prevent them from trying. Even if the water never reaches the magic temperature point that triggers the actual release of eggs and sperm, the warming waters and longer days of summer cause the gonads of most oysters to swell in preparation for spawning. And that means an oyster that tastes and feels different from the same variety in cold weather -- soft, milky, and bland rather than firm and sweet. While an oyster in this condition may not be that appealing for serving raw on the half shell, it's fine for cooking.

Then there's the safety issue. The bay and estuary waters where oysters grow are host to various sorts of bacteria, and eating any shellfish raw can expose the eater to a variety of these bacteria. Some are harmless, but a few varieties, particularly several species of the genus Vibrio, can cause human illnesses ranging from the simply unpleasant to the serious or even fatal. In the former category is V. parahaemolyticus, the latest outbreak of which (July 1998) caused hundreds of cases of gastrointestinal illness in people who ate raw Texas oysters. A related species, V. vulnificus, can be fatal to persons with compromised immune systems if eaten raw.

The various vibrio bacteria become more abundant in warmer waters, making them more of a concern in the summer and in more southerly areas. In addition to reported outbreaks, parahaemolyticus is likely responsible for countless unreported cases of "food poisoning" every summer in people who insist on eating raw oysters from warm waters. However, even cold-water growing areas like the Pacific Northwest have seen higher parahaemolyticus counts in recent summers, likely due to El Nino and possible long-term global warming, and summer health advisories on raw oysters are becoming more common in the Northwest.

Fortunately, these nasty forms of vibrio, like most other bacteria, are killed by normal cooking temperatures. Aesthetic issues aside, it simply makes more sense to enjoy summer oysters cooked rather than raw.

Barbecued Oysters
serves 4-12
The recipe here is enough for a sack of 50 to 60 oysters, about right for a single session on a kettle-type grill. How many people it will serve depends on the rest of the menu and the company; some oyster lovers can polish off two dozen of these. Half a dozen per person is a good average if there are other foods being served, closer to a dozen if this is the main dish. A few barbecued oysters can be a nice first course, but keep the number small so you don't use up all your fire on the oysters before you get around to cooking the rest of the meal.

Scrub the oysters well with a stiff brush, especially around the hinge of the shell. Rinse. Discard any open oysters that do not close when handled. Lay the oysters in a bus tray or picnic cooler, flatter sides up, and cover with a damp towel or burlap. This can be done several hours ahead of serving time.

Cut the root end off the garlic and slice the head in half crosswise, exposing all the cloves. Melt the butter slowly in a small saucepan and add the garlic. Simmer slowly for at least 15 minutes, or until the butter has a definite garlic flavor. Season to taste with lemon juice and set aside.

Build a hot charcoal fire in an open or covered grill; if using briquets, count out enough to cover the fire grate in one layer and add about one-third more. When the coals start to cover over with gray ash, lay a batch of oysters on the grill, flat side down. Cook until the shells begin to open and steam hisses out between the shells, 3 to 5 minutes. Have the garlic butter and salsa handy.

As each oyster begins to open, remove it from the grill with tongs, tipping it up do drain off excess water. Using an oven mitt or folded towel to protect your holding hand, pry off the top shell with an oyster knife and return the half-shell oyster to the grill, cup side down. Spoon a teaspoon to a tablespoon of salsa into the shell and drizzle with a half-teaspoon or so of the garlic butter. Cook the sauced oysters until the meat shrinks noticeably and the margins get wavy. As space become available on the grill, keep adding more oysters.