If asked to name a typical Spanish food, most people would probably think of paella, the savory dish of saffron-flavored rice. More than likely, they would be thinking of the form known to every tourist as Paella de Valencia, overflowing with shrimp, mussels, and other shellfish, plus chicken, ham or sausage, and sometimes other meats as well. But paella is hardly a single dish; Spain has countless variations, and all they have in common is the pan, the rice, and the saffron.

Paella takes its name from the characteristic vessel in which it is cooked, a wide, shallow, flat-bottomed pan made of iron or steel. This large surface area allows the rice to cook without steaming, which is essential to the texture. Less traditional but also appropriate is the shallow flameproof earthenware casserole called a cazuela. Cazuelas with glazed terra cotta interiors are widely available, and have more uses than paella pans.

The type of rice is also critical. Only a medium-grained rice has the right starch content to provide the correct texture. Authentic Spanish rice is available in some well-stocked stores, but I frankly can't tell the difference in results between it and the very similar Italian Arborio rice, which is much easier to find. California medium-grain (Calrose type) rice makes a decent substitute, though it takes longer to cook.

Most, but not all, paellas include saffron. This precious spice, the dried stigmas of a summer-blooming crocus that is one of Spain's most important crops, gives paella and other dishes their characteristic bright yellow color, and more importantly a distinctive flavor. It is possible to use too much saffron, and get a rather metallic taste, but a far more common error is to use too little. To paraphrase the late San Francisco cooking teacher Josephine Araldo, if you are going to use something as expensive as saffron, then use enough to make a difference. The half teaspoon of threads in today's recipe is a minimum, and twice as much would not be excessive. 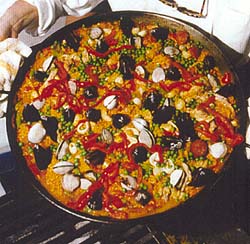 Additions to paella can be as simple as one type of meat or shellfish, or as elaborate as the Valencian version. Frequent ingredients include sausage (chorizo or linguisa) or ham, fresh pork or veal, lobster, langostinos, and fish, plus sweet peppers, tomatoes, and peas. In theory, any combination of these is possible, but it's best to keep it simple and let a few ingredients shine through. The recipe given here relies on chicken and an assortment of readily available shellfish. However, if the only good seafood I could find were mussels, or clams, or shrimp, I wouldn't hesitate to make a paella with just the one item.

Metal paella pans come in many sizes, but bear in mind that you need a heat source nearly as large as the diameter of the pan; the breadth of the flame on a typical home stove limits most home cooks to a 12- to 14-inch pan. Another possibility, described by Ann and Larry Walker in their book To the Heart of Spain, is to cook the paella over a charcoal and wood fire in a covered kettle grill. I've tried it and it works beautifully, though it makes a smoky mess of the outside of the pan. If you get it in your mind to cook a paella for a really big crowd, check with a rental shop (the kind professional caterers rent from) for a set consisting of a large paella pan and a free-standing gas burner with several burner rings.

Mixed Shellfish Paella
serves 8
If you are making stock for this purpose from the chicken parts, throw in the shrimp shells for additional flavor.

Divide the chicken into parts, then with a heavy cleaver, chop each breast half into 3 pieces, each leg into 4 pieces, and each wing in half. Remove the wing tips and reserve along with the back and neck for stock. The giblets can go in the stock or the paella as you like.

Combine the oil, onion, and garlic in a 12- to 14-inch cazuela or paella pan and place over low heat. When the onion begins to sizzle, increase the heat to medium. Add the chicken pieces a few at a time and cook until lightly browned, sprinkling them with a little of the salt and pepper as they cook. As they brown, move the chicken pieces to the outside of the pan to make room for more in the center.

When all the chicken has lost its raw color, add the squid, peppers, green onion, and the remaining salt, and crumble in the saffron. Stir in the rice, cooking for a minute or so to coat it with the oil. Add warm stock to within 1 inch of the rim of the pan (not all the stock may be needed). Arrange the shrimp over the top, and the mussels or clams in a ring around the outside, hinged side down. Cook at a lively simmer until the rice is just tender, about 20 minutes; scatter the peas over the top halfway through the cooking time. The paella may seem a little soupy when it first comes off the fire, but the rice will absorb the excess liquid in a few minutes.

Jay Harlow is a California Bay Area cookbook publisher, culinary instructor and author of ten books including Once Upon a Bagel, The California Seafood cookbook & Beer Cuisine.