Farmed Salmon: Bacon of the Sea? 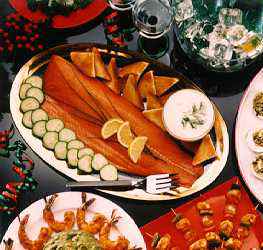 Although aquaculture (fish "farming") has been around for hundreds and even thousands of years, real domestication of fish and shellfish, with humans controlling the entire life cycle from selective breeding in hatcheries to feeding, growout, and harvest, is a much more recent phenomenon. And no fish has been more quickly and dramatically transformed from a wild resource to domesticated livestock than salmon, particularly Atlantic salmon.

In its wild form, Atlantic salmon (Salmo salar) is native to rivers and nearshore waters around the north Atlantic rim from New England to Scandinavia, and it provides popular sport fisheries in many areas. However, due to the familiar combination of overfishing and habitat alteration, the wild population can no longer support commercial fishing in most of its range. Seeing the declining stocks, the Norwegian salmon industry changed its focus in the 1970s from catching salmon to raising them in captivity, developing a form of saltwater salmon farming that has since spread around the world. Norwegian farming technology is now being used to farm salmon in various sites in northern Europe as well as Washington, Maine, both coasts of Canada, New Zealand, and Chile.

The typical salmon farm consists of an array of circular or rectangular floating net pens, accessible by boats or piers, in a sheltered saltwater site such as a fjord or deep bay. The pens are stocked with 6-inch juvenile salmon called smolts, usually spawned in the farm's own freshwater hatchery from its own broodstock. Several times a day, either manually or through automated systems, the farmer scatters pellets of feed based mainly on fish meal over the surface of the pen, where they are gobbled by the salmon as they slowly sink.

Although the same technology can be used to raise other salmonids such as Pacific steelhead, king, and coho salmon, Atlantic salmon has proven the most reliable and profitable species for saltwater farming. By choosing the fastest-growing fish for breeding stock, and with a new generation available every three or four years, farmers are seeing steady improvements in growth rates with each generation.

Meanwhile, salmon feed manufacturers continue to fine-tune the percentages of protein, fat, and carbohydrates for optimum growth and health. The trend for several years has been to "high-energy" diets with less carbohydrates and more fat. With each new formula, farmers have seen their feed conversion ratio push ever closer to 1:1 -- meaning each additional pound of feed added to the pen produces nearly a pound of fish!

Together, these technological advances mean a salmon can grow from smolt to market size (typically 4 to 10 pounds) in 14 to 18 months, as much as a year less than it used to take. And therein lies one of my biggest problems with farmed salmon. With such ample feed, the fish deposit excess calories in the form of fat.

Now some fat is a good thing; just as in beef, fat means flavor in salmon, and a lot of the most prized wild salmon, like Alaska's Copper River and Yukon River kings, are favored precisely because they are fatter than others, in preparation for longer upstream migration.

In the case of farmed salmon, however, one can have too much of a good thing. While I generally like the flavor, for my money these fish taste and feel too fatty. Yes, it's "good" fat of the omega-3 variety, supposed to reduce the risk of heart disease; still, the fish could be a little leaner and still provide plenty of the good stuff. (If you agree, let your fishmonger or grocer know; perhaps if enough buyers speak up, the word will get back to the farmers and they might find a way to "finish" the fish with a little less fat.)

In the meantime, cooking farmed salmon has become something akin to cooking bacon or duck, where the cook has to contend with more fat in the food than is desirable to end up on the plate. I recently cooked a single 7-ounce steak of farmed salmon (in this case, king salmon from British Columbia) in a dry nonstick skillet, and by the time the fish was done nearly a teaspoon of fat had seeped out of the fish. Even so, the belly meat (the two thin flaps that make up the open end of the steak) had an unpleasantly fatty feel on the palate.

On the other hand, all that fat means it doesn't take any special skill or spilt-second timing to cook farmed salmon. Even when cooked to the fully opaque stage, farmed salmon remains juicy throughout (although like any fish it will eventually dry out if overcooked). I'm sure this forgiving quality has a lot to do with the growing popularity of salmon in chain restaurants.

The other big effect of increased efficiency in salmon farming has been on the price. Until the mid-1980s, farmed salmon were still relatively expensive, and they served mainly as an off-season replacement for wild Pacific salmon. Once the West Coast seasons opened in the spring, however, the price would drop out from under the farmed fish. But the price gap gradually disappeared, then reversed itself, as farmed salmon (especially the Chile-raised version) became cheaper than wild. Since the late 80s, the combination of steady availability and lower price of farmed salmon has depressed the price of wild Pacific salmon. These days, West Coast fishermen routinely settle for ex-vessel prices lower than those they would have refused in past years. Retail prices generally run about the same for wild and farmed salmon.

Given the relatively modest price, it's tempting to deal with the excess fat problem with a knife -- by trimming fillets severely, cutting away a good inch or more of the belly flap to concentrate on the thicker and slightly leaner meat in the center and dorsal side of the fillet. Japanese sushi chefs take a similar approach with yellowfin and other large tunas, distinguishing between the fatter, paler belly meat (toro) and the redder, leaner meat from higher on the fish (maguro).

Even with the belly meat removed, I prefer cooking methods where the drippings from the fish are left behind rather than incorporated into the dish. Steaming preserves the purest flavor and texture, while broiling or searing in a hot skillet (in either case, discarding the drippings) or grilling (where the drippings fall into the fire) add an attractive browned flavor.

If you can't stand to let the belly meat go to waste, consider using it in raw preparations like sushi or ceviche. Served cold and raw, in modest portions, and with the balancing effect of the rice and wasabi in sushi or the citrusy acidity of ceviche, the richness of salmon belly becomes more appealing. Another approach is to cook the belly strips thoroughly (by poaching, steaming, or hot-smoking) and break the meat apart into flakes to use in pasta sauces or salads.

Basic Pan-Seared Salmon Fillet
This is not a recipe as much as a basic cooking method. Accompany the fish with a generous vegetable garnish, anything from simple sauteed spinach to a melange of whatever vegetables are in season. The fish doesn't really need a sauce, but feel free to add your favorite salsa, relish or other low-fat topping.

Two portions will cook nicely in a 10-inch skillet, or four in a 12-inch skillet; if cooking more than will fit comfortably in one pan, it's better to use two pans than to crowd them together. A good nonstick skillet will require no added oil, but if using cast iron or another surface, either coat the cold pan with nonstick cooking spray or with the thinnest possible film of oil.

Trim as much of the thinner belly meat of the fillet as you like; discard or reserve for another use. Season the fish well on both sides with salt and pepper.

Choose a heavy skillet just large enough to hold the fish portions. Preheat over medium-high heat until a drop of water evaporates instantly on contact. Add the fillets skin side up and cook until the surface is nicely browned and releases easily from the pan, 3 to 4 minutes; turn and cook on the second side until a skewer easily enters the thickest part of the fish. Transfer to plates with a slotted spatula, leaving the pan drippings behind.