The Delights of Turkish Cuisine 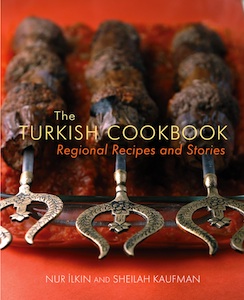 It is said there are three major cuisines in the world: Turkish, Italian, and French. Each is based on local ingredients and flavors. While many well-known national cuisine's rely on one basic element (i.e. French cuisine is based on sauce and pasta forms the essence of Italian cuisine), there is no single dominant feature in the Turkish kitchen.
Home of the original Mediterranean diet, Turkish cuisine is well on its way to becoming the next big trend in cooking as more and more attention is being paid to it. Turkey has made enduring contributions to the world’s cuisine, especially its gift of yogurt, with its diverse gastronomic history and flavorful, healthful recipes.
This major cuisine is a colorful mosaic based on and enriched by the recipes and techniques of many ancient cultures (from the Hittites, Byzantines to the Chinese, Crusaders, Persians, and others); centuries of palace cooking, creativity of housewives, and geography of the regions.

From all the peoples the Turks came into contact with they added to their culinary pool, enriching their own cultural characteristics and cooking techniques.

The Ottomans, once they controlled the entire eastern Mediterranean basin, went about obtaining the best foodstuffs from around the empire and beyond. They were considered Culinary Plunderers! Palace cooks plundered the markets for exotic ingredients to produce ever more ambitious menus. They flamboyantly adopted and adapted the recipes encountered in the Balkans, Mediterranean region, North Africa, and much of the Arab world. “Cooking was regarded as an art form and eating a pleasure, a legacy that remains at the root of Turkish Cooking.”

To understand the magnitude of the Ottoman Empire, here are the modern names of the territories, countries they controlled/conquered:

Some of the earliest fusion cooking began with the Ottomans to create one of the world’s greatest cuisines. Today many of the recipes from this period are still a part of Turkish cuisine.

Elements of Persian cuisine, including the combining of meats and fruits/vegetables in their stews, came with the establishment of the Seljuk state. After settling in Anatolia, and with their adoption of Islam, Arab cuisine contributed many spices, including hot peppers, and dishes based on wheat and mutton. Seafood dishes were added as they reached the Aegean and Mediterranean seas.

In the 16th and 17th centuries, the Ottomans traded with the Spaniards who introduced many new products from the New World to Istanbul, including: chili peppers, tomatoes, and maize. These products were quickly absorbed into the Palace cuisine and thus out into the Empire, shaping “much of what we today call the Mediterranean diet."

Today there are seven regions in Turkey, each with indigenous agricultural products, cultures, customs, traditions, and local dishes. They are: Black Sea, Aegean, Marmara, Mediterranean, and the 3 regions of Anatolia.

In addition, the variety of climates in Turkey allows the cultivation of a wide diversity of crops. Cosmopolitan, rustic, delicate, hearty, healthful, traditional, complex, and evolving best describe Turkish cuisine.

BAZLAMA BREAD Central Anatolia
Bazlama is a type of round bread (like a pita) traditionally baked in a tandoor or between two thin hot iron plates. From: The Turkish Cookbook Regional Recipes and Stories by Nur Ilkin and Sheilah Kaufman (Interlink Publishing, 2010)

2 packages (1/ 4 ounce each) of active dry yeast, room temperature
1 teaspoon sugar
2 cups warm water (about 105 F to 115 F) Do not make water too hot or it will kill the yeast
3 tablespoons canola oil plus oil for greasing the bowl
2 teaspoons salt
5 1/ 2 cups sifted all-purpose or bread flour, divided

Place yeast and sugar in a large bowl and add water. Mix well to dissolve yeast and sugar and let stand for about 10 minutes to "proof," or until foam forms on the top. If you do not get foam your yeast may be dead and the recipe will not work.

Whisk in the oil, salt, and 2 cups of flour and mix until blended and smooth.

Using your hands, mix in the last 1 1/ 2 cups of flour. Dough may be somewhat sticky - if it is, add extra flour by the tablespoon as you knead the dough.

On a lightly floured work surface, knead the dough until you have a ball of dough that is smooth and elastic, about 8 to 10 minutes.

Lightly grease a large bowl and place the ball of dough in the greased bowl, turning the ball so all sides are lightly greased. Cover bowl with a clean kitchen towel and let dough rise for an hour in a warm, draft-free place. Dough will double in bulk (about an hour).

Punch down the dough and using floured hands, divide dough into 16 to 18 balls.
Place a ball on the lightly floured surface, pat ball down, then pat back and forth between the palms of your hands a few times, stretching the dough. Take your thumb and index finger and go around the outside of the flattened dough stretching from the center out until dough is a circle about 5 inches across. Dough should be about 1/ 4-inch thick. Continue until all balls of dough are stretched.

Lightly spray a large non-stick skillet and fry as many "pitas" as fit (without touching each other) in the skillet. Cook over medium heat until puffed and lightly golden brown on the bottom. Turn over and cook until top is just lightly golden. Remove from pan and continue until all pitas are cooked.

Serve warm with jam, olives, yogurt, or your favorite dip.

WALNUT AND RED PEPPER PASTE Gaziantep SE Anatolia
This delicious paste is used as a dip with toasted bread, as a canapé spread, as an
appetizer (meze), or as an accompaniment to raw or cooked vegetables. Pomegranate syrup is available in Mediterranean, Persian, and other markets. Because it is sour, Nur always adds brown sugar to the recipe. If your peppers are pale, not bright red, a little paprika can be added for color. From: The Turkish Cookbook Regional Recipes and Stories by Nur Ilkin and Sheilah Kaufman (Interlink Publishing, 2010)

Dry roast the nuts: Heat a skillet over medium heat, add walnuts, and dry roast for 6 to 7 minutes, shaking the pan so the nuts do not burn. Remove from heat and let cool.
Place the walnuts in a food processor and process to breadcrumb consistency. Add breadcrumbs and process or pulse a few times.

Blend well until a rough (not smooth) paste is formed. Transfer paste to a bowl, cover, and refrigerate until serving.

ABOUT TURKEY: Did You Know That…

Turkey is a land with a history that stretches back over 10,000 years and is best described as a mosaic.

The only city in the world located on two continents is Istanbul, which has been the capital of three great empires, Roman, Byzantine and Ottoman for more than 2000 years.

The Turks introduced coffee to Europe, and The Turks also gave the Dutch their famous tulips.

Turkey provides 70% of the world's hazelnuts; the nut in your chocolate bar was most probably grown in Turkey.

Part of Turkey's southwestern shore was a wedding gift from Mark Anthony to Cleopatra.

Santa Claus was originally from Turkey.