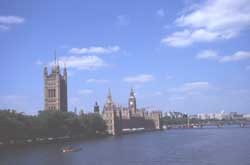 TWO OR THREE DECADES AGO MOST VISITORS TO ENGLAND COMMENTED THAT THE ONLY MEALS THEY REALLY ENJOYED IN ENGLAND WERE THE BREAKFASTS. BUT MUCH OF THIS HAS CHANGED, AND GREAT RESTAURANTS ARE NOW VERY MUCH ON THE SCENE. HERE ARE SOME THAT YOU MIGHT ENJOY ON YOUR NEXT VISIT TO BRITAIN'S CAPTIAL.

Images of London - the Tower Bridge majestically spanning the Thames, the Royal Cavalry in their scarlet cloaks clip-clopping through Hyde Park, Big Ben striking 6 p.m. just as the twilight brings a million lights to the city, Westminster Abbey, Parliament House, perhaps the most impressive building of its kind in the world, tabloid newspapers revealing yet another scandal, and steak and chips or fish and chips as the anchor dishes of half the restaurants in England.

When, some time ago, visitors from the Continent were asked in a survey what they liked best about British food, something like 80% said, "the English breakfast". To the next question which read, "What do you like least about English food?" almost as many answered, "all the other meals". Gault & Millau, the gurus of French cuisine, came to London around that time to produce a book on fine dining in London. Their comments were so scathing that they made many restaurant owners cringe in shame.

But in the last few years London's restaurant scene has improved to a dramatic degree. Brits are now much more choosey about their restaurants, demanding much higher standards. And their demands are being met. Excellent neighbourhood restaurants are springing up all over London. Many English chefs take working holidays in France to broaden their culinary skills. And the produce, too, is getting noticeably better.

Behind all this is a small core of outstanding chefs who, by their example, have raised expectations in the public and inspired the new generation of up-and-coming culinary craftsmen to lift their game and produce a standard of cuisine they can be proud of. Without fuss or fanfare, London now offers some really outstanding, world-class dining establishments. Here are five of this city's best. 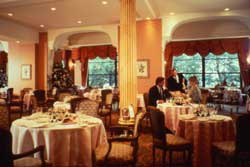 THE RIVER RESTAURANT. If you want to dine at a legend steeped in history, experience the very best of English cuisine, and enjoy a fabulous view while you're at it, then there is no better place to head for than the Savoy Hotel. Surely this must be the most historic English hotel.

BLAKES. Dining at Blakes is more than just 'dinner out' - it's a total experience, an immersion in the world of the 'Beautiful People' and an outstanding example of the new wave of excellent cuisine now appearing in Britain's restaurants. But bring a bottomless credit card. This is not a place for those who are faint-of-wallet!

As with the suites at the Blake Hotel, the restaurant decor is elegant, opulent, chic, and trendy in a multi-millionaire's sort of way. Rich, dark surfaces, clever spotlights that highlight artefacts like Thai warrior costumes, Javanese baskets, caged lovebirds and a (reproduction) Rodin bust. Add strategically placed mirrors that seem to only reflect the best of your looks, designer plates filled with nibbles that become part of the decor, beautifully-arranged exotic flowers, and you get a feeling that you might be dining at the London home of a Maharajah or an Asian Princess.

Responsibility for the high standard at Blakes rests with Lady Weinberg (better known to many as designer Anouska Hempel). She is a total perfectionist and demands nothing short of the best from her chef, his brigade, the maitre'D and his service staff.

The hotel in which the restaurant is set is a legend among England's well-heeled 'Movers and Shakers' in the world of stage, screen, art, industry and the professions. Dining at Blakes is as much a theatrical experience as a culinary one. Francis Ford Coppola likes table 7, and Mick Jagger, Kylie Minogue, Cindy Crawford and Brigitte Nielsen all prefer table 9. Diana Ross and fashion buyers from Bergdorf Goodman like table 10, though designer Issey Miyake always gets meals sent to his suite, eating while sitting or lying on the floor.

Lady Weinberg, true to form as one of Britain's foremost designers, even specifies the presentation of each dish and the plate it is to be served on, following the Asian traditions of edible sculpture that are art forms in places like Thailand and Japan.

And what dishes. Lamb Carpaccio with Cracked Wheat, Lime and Mint and Roast Sea Scallops with Ravioli of Ginger are side to side with Japanese-style Sashimi, Souffle Suissesse or Blakes Blini of Beluga, and will give you some idea of the direction of the cuisine here.

Or you might choose from Prawn Toast Wrapped in Bean Curd with Chilli Sauce, or Steamed Cumin Scallops with Fried Seaweed and Turmeric. For mains there are such delights as Langoustine in Sesame Filo with Chilli Noodles or Chicken Faberge filled with Lobster and Ginger with Basil Sauce. There's much more, but all with two common denominators. Whatever you order will be delicious - and super-expensive!
Blakes, 33 Roland Gardens, SW7, London, U.K.
Ph: (44) 207 370 6701
http://london-hotels.hotels-london.co.uk/blakes.hotel 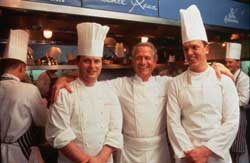 WATERSIDE INN. The Waterside Inn is now run by Michel Roux’s son Alain. This review was written when Michel Roux was at the helm.

If your dinner here is an incredible dining experience, look to the chef behind the restaurant for the reasons. The owner and chef is Michel Roux, born in the Loire area of France, who first came to Britain when appointed Chef to the French Ambassador to that country.

Subsequently he was Chef to the Rothschild family in Paris as well as to the German Bismark and Schneider families. He started winning silver medals for his culinary art in 1963, received his gold medal by 1972, reached his third Michelin Star by 1989 and was presented with the Chevalier de l'Ordre National du Merite in 1990.

When opening his own restaurant, Michel Roux decided to shun the inner-city, choosing instead a small, charming inn overlooking the picturesque Thames at Maidenhead, some 23 miles west of London.

Outside the picture-windows the Thames is a stage of bit-players making seemingly endless entrances and exits. One minute it is a gaggle of geese swimming past, the next a speedboat throwing a v-shaped wake as it zooms past the window. Rowboats, swans, houseboats and barges all vie for attention.

For those who can take their eyes off the picture-window view, the decor of the Waterside Inn is cheery and sets the stage for an outstanding meal. Pink tablecloths, festooned curtains, comfortable chairs, all create an atmosphere to prepare you for an outstanding dinner.

The cuisine, though based on the French, is international and with outstanding presentation. It is wise to start with the Roux signature dish of Poached Egg Souffle with Fine Herbs, but there are dishes like Warm Terrine of Salmon and Hake in a Saffron Sauce; Terrine of Goose Liver; freshly fried Trout; or Fillets of Young Grilled Rabbit with Chestnuts to tantalise your tastebuds. And with this restaurant there is another, quite charming, touch. For those who have the time and inclination to travel up the Thames after their meal, the Waterside II, an electrically-powered motor boat, can be hired from the restaurant on an hourly basis.

All the restaurants mentioned here are at the very top of London's culinary scene, and so it is almost essential to make your reservation well in advance.
The Waterside Inn, Ferry Road, Maidenhead, Berkshire, SL6 2AT, U.K.
Ph: (44) 16 282 0691
http://www.squaremeal.co.uk/restaurants/uk/display.php?Rest_ID=82022

SOME OTHER GREAT RESTAURANTS IN LONDON 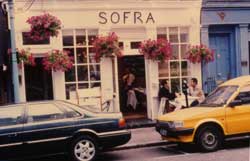 Sofra Restaurant
18 Shepherd Street
Mayfair, London W1 U.K.
Ph: (44) 207 493 3320
http://www.sofra.co.uk/
For an excellent meal that is tasty, interesting and not at all heavy, you can't go past Sofra. This Turkish restaurant, in the middle of Mayfair, has a lot going for it, specially the owner, Huseyin Ozer. He personally supervises the kitchen and creates new dishes for the extensive menu. Try the Healthy Lunch, a selection of mezes or appetisers or one of the grilled meat dishes. The Turkish meatballs, called kofte are particularly good here.

Around the corner from Harrod's, this is a favorite with London's trendsetters! Excellent Italian cuisine in bright and charming surroundings is the name of the game here. Try the lobster spaghetti. Fabulous! Movers and shakers, the executive scene and 'ladies who lunch' all love it here. The wine list is excellent too.


HIX at The Albemarle
Brown's Hotel
Albemarle Street, W1, London, UK.
Ph: (44) 207 408 1837
http://www.brownshotel.com/press_281005.html
Oak paneling, moss green leather banquette seating, cream linen Roman blinds and specially commissioned 1930s style Italian lights are just part of this redesigned restaurant. Classic dishes includes a delicate balance of English fare, including a daily roast from the carving trolley, and Continental cuisine with a modern influence. Frequented by Knights of the Realm, this is where you might find yourself sitting next to an Earl or someone equally important.

All the restaurants mentioned here are extremely popular, and it is essential to make your reservation well in advance.

Walter Glaser is a international travel-writer based down under in Melbourne, Australia.