"You must go to the 'Chinese'," answered my lawyer friend when I asked him for a really good restaurant in Tel Aviv. And this advice was repeated again and again -- from Jerusalem to Eilat whenever the question was asked.

I've never understood why in Israel, the home of a people who are individually some of the best and fussiest cooks...and eaters...on earth, so few restaurants come up to top international standards. 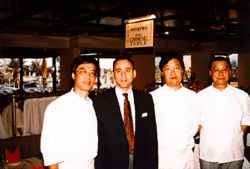 Perhaps in a young and vigourous country, fine, elegant restaurants are low on the list of priorities. Or perhaps the fact that over half the population is now of Sephardic or middle-eastern Jewish background has made restaurants serving the simpler and traditional middle-eastern fare more popular. But the craze for Chinese...and to a lesser degree, in Jerusalem, Japanese...restaurants is sweeping the country.

The last thing an Australian-based travel writer wants to do is to eat at a Chinese restaurant in the Middle East. To me it somehow seems wrong -- like eating McDonald's hamburgers in Paris, or Kentucky Fried Chicken in Tokyo. 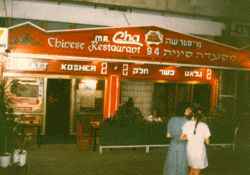 As a travel writer I feel almost duty bound to look at, and try, local foods whenever I travel. Besides, it seems almost absurd to have a Chinese meal so far from that country. While I concede that in Japan, Australia or California, a large Chinese population in each of these countries can maintain a semblance of authenticity in that cuisine, Israel was the last place where I expected a Chinese meal to be edible.

Yet wherever I went in Israel, the advice from locals was the same; "Eat Chinese food, it's good here."

Looking into the matter I found that Chinese restaurants are now to be found in every major town in Israel. From Tiberias to Haifa, from Tel Aviv and Jerusalem to Eilat, they have sprung up like mushrooms and all are doing surprisingly well. A few are Israeli-owned with the cook imported from Hong Kong. But most, to my surprise, are owned and run by families from Hong Kong, whose members have adopted Israeli first names like Avi, Naomi and Dov. 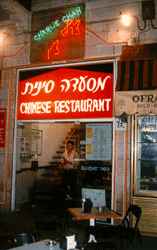 A percentage of Chinese restaurants in Israel, mainly those incorporated into hotels, seem to keep to the Kosher system. Here, dairy products are disallowed...who takes milk in Chinese tea anyway?

Hotel-affiliated Chines ...and, for that matter, non-Chinese...restaurants all seem to stick to Kosher cooking, regardless of their size and position. The independents -- smaller, family-run restaurants catering for the secular local or tourist clientele serve anything they wish, including the pork and shrimp dishes so traditional in Chinese cooking.

The third group -- the compromisers -- tread the middle road for Israel. They do not serve pork, but the meat is not Kosher. I eventually tried Israeli Chinese cooking when invited by an Israeli friend who obviously loved Chinese food -- and was pleasantly surprised.

Smoked beef had been used as a substitute for the traditional pork ingredients, and lightly smoked fish replaced the shrimp. The chef from Hong Kong had much to my surprise, produced a very credible meal indeed which seemed to lose none of the authentic Chinese flavour. 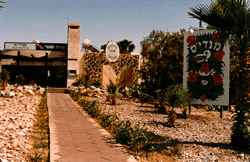 The other Asian cuisine which has also become very popular in Israel is that of India. There had been a substantial Jewish community in the Goa and Bombay areas of India since the days when King Solomon sent his trade emissaries into the far corners of the then-known world. In recent years many of these Indian Jews opened restaurants in Israel, and some of these are outstanding. In Jerusalem, the Kohinoor Restaurant is my favourite (splendid food, beautifully served in very pleasant surroundings) so much so that I'm quite convinced that this restaurant would be extremely popular if located anywhere else in the world. Apart from this location, there is another similar Kohinoor Restaurant at the Moriah Plaza Hotel in Tiberias.

Thai food is also booming. On Jabotinsky Street in Jerusalem, Roni Cohen, who also owns restaurants with a similar name in New York and Bangkok has opened the Rungsit Restaurant serving authentic Thai and Japanese food. It was an immediate success. With so many Thai contract labourers now coming to Israel to work on farms and in agriculture, it is only a matter of time before many of these, too, will open Thai restaurants, and it is a certainty that if the food is reasonably good, they will succeed.

Just a few years ago I would have scoffed if someone had predicted the popularity of Far Eastern food in Israel. However, it is now obvious that it has captured the imagination and palates of the Israelis. Chinese, Indian and Thai cuisine has really caught on and appears to be in Israel to stay.

Walter and Cherie Glaser are a truly global writing and photography team based "Down Under" in Melbourne, Australia.