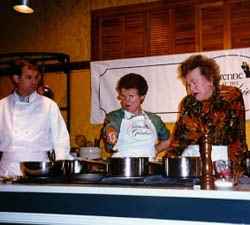 "Noncooks think it's silly to invest two hours' work in two minutes' enjoyment; but if cooking is evanescent, well, so is the ballet."
-- Julia Child

My mother pretty well summed it up: "I never thought that my little girl from Arkansas would be rubbing elbows with Julia Child." Neither did her little girl.

But in the course of researching this article, I not only rubbed elbows, but also had breakfast, a deux, with Julia Child. I'm still pinching myself to see if it was true or a dream.

The setting was the main dining room of The Greenbrier, an elegant resort tucked away in the hills of West Virginia, and the occasion was the 1997 Symposium for Professional Food Writers, at which we were both speakers.

As I stammered in awe and the waiters hovered respectfully, Julia -- after spending years with her on TV and through her books, it's almost impossible to think of her as Mrs. Child -- put me and them at ease with her genuine friendliness and zest for living.

She ordered a hearty breakfast -- grapefruit half, plain yogurt, fried egg, 2 strips bacon, toast with butter and preserves, orange juice, and coffee with milk -- and ate most of it despite constant interruptions. Throughout the meal, other hotel guests stopped by to pay homage to her, and ask for her autograph and to take a photo. To each person, she smiled graciously and never let on that they were interrupting her breakfast. I became a momentary celebrity by the mere fact that I was having breakfast with her -- "You must be somebody, too," said one woman who asked to take my photo.

One of the waitresses came up after one of the photo sessions and said, "Everyone loves you, Miss Julia -- and so do I. I have your autograph and I cherish it."

During the symposium, another food writer noted that Julia "carries her fame with such grace," and I can think of no better way to put it. As she approaches her 85th birthday on August 15, 1997 Julia Child is truly a national treasure and living legend whose stature continues to grow. Julia Child is like a fine wine -- she just keeps getting better with age. It's a comparison she would probably enjoy.

But she modestly dismisses any pending hullabaloo about her birthday. "It's a convenient fund-raising springboard," she says, with utmost practicality.

Instead of the long series of birthday events that surrounded her 80th birthday, this year there was one major event, the eighth annual rare wine auction sponsored by the American Institute of Wine and Food (AIWF), of which Julia is a co-founder.

The event, which was held April 26, 1997, at the Willard Hotel in Washington, D.C., combined the auction with a special birthday tribute to Julia's achievements and contributions to American life. The event raised $107,000 dollars for AIWF educational programs and publications -- the most successful AIWF auction to date.

The highest bid in the live auction was $9,000 for dinner with Julia Child at Beringer Vineyards. Her original portable demonstration table brought $7,000. In the silent auction, her copper mixing bowl went for $2,000.

Reflecting on her celebritydom and the widespread enthusiasm for celebrating her birthday, Julia says modestly, "I'm fortunate to be in this kind of business, where everybody likes his or her work."

She didn't start out in food, however. As she puts it, "I was 32 when I started cooking; up until then, I just ate." The magical conversion occurred -- where else? -- in France.

According to her official biography, in 1934, Julia McWilliams graduated from Smith College. When World War II broke out, she joined the Office of Strategic Services (OSS) and was sent to Ceylon, where she met Paul Child, who also was in the OSS. From Ceylon, they were sent to China. After the war, they returned to the United States and were married. Paul Child joined the United States Information Agency (USIA) and was assigned to the American Embassy in Paris in 1948, in what proved to be a turning point in their lives.

She fell in love with France and French cooking literally after the first bite. She enrolled in the Cordon Bleu and studied there for about six months, then studied privately. She met Simone Beck, who invited Julia to join the French women's gastronomical society, "Le Cercle des Gourmettes," and introduced Julia to Louisette Bertholle. The three women eventually opened a cooking school, "L'Ecole des Trois Gourmands" ("the school of the three hearty eaters") in Paris. They also collaborated on "Mastering the Art of French Cooking" (Knopf, 1961), which became the launching pad for America's introduction to French cooking.

When Paul Child retired from the foreign service in 1961, the Childs settled in Cambridge, Massachusetts. Julia was invited to appear on a Boston television station, WGBH, in connection with the cookbook. She made an omelet, beating the egg whites in a large copper bowl with a large balloon whisk. That omelet led to three pilot shows in 1962 -- a first, because there were no television cooking shows at that time. Julia Child and "The French Chef" went on the air February. 11, 1963, and her cooking shows have been aired and repeated ever since.

"The French Chef Cookbook" (Knopf, 1968) was a compilation of the first 119 black-and-white television shows. In 1970, Julia and Simone Beck produced Volume II of "Mastering the Art of French Cooking" (Knopf). (Both volumes were revised extensively and republished in 1983.) Meanwhile, in the late 1960s, the television show went into color. Her fourth book, "From Julia Child's Kitchen" (Knopf, 1975), contains, among other things, the whole of "The French Chef" color series.

"Julia Child & Company" and "Julia Child and More Company" were taped by WGBH in 1978 and 1980, and each series was accompanied by a cookbook. Both books have been combined into one volume called "Julia Child's Menu Cookbook (Wings Books).

In 1984, the show began an entirely new concept with the taping of "Dinner at Julia's," which featured segments such as salmon fishing in Puget Sound and visiting chefs such as Wolfgang Puck and James Beard.

Not one to rest on her laurels, Julia admits, "I'm thinking about a new book."

Back home after the Greenbrier experience and working on this article, I rummaged through my cookbook shelves, looking for all of Julia's books. In the process, I came across many souvenirs. There were several autographed books, including one with the signature of Paul Child, her late husband, as well as Julia. Tucked amid the pages of the books were copies of articles, including one from my first year as a newspaper food editor in 1975. In my youthful innocence, I seemed to be less awed by Julia then than I am now, when I am practically tongue-tied at times.

Among the articles I found was an interview in the Chicago Tribune in April 1981, in which Julia said, "I've been cooking 30 years now (she was then 68) and I'm still learning, which I'll continue to do until I'm 103, and then I'll taper off."

She's almost 85 now and shows no signs of stopping or even slowing down, so it's great to know we can look forward to another 20 or so years. The trick is keeping up with her.

After long, busy days at the food writers' symposium, Julia was often in the hospitality suite until midnight, chatting with novices and celebrities alike, sharing stories from her long career and poking fun at herself. With just a little prodding, she shares tales of spun sugar that didn't spin, of souffles that fell, of kitchen disasters that made her the beloved television cooking personality that she is.

Maybe it's because of her general attitude about life's greatest pleasures, food and wine.

"You should eat a little bit of everything. Not that you should overdo, but you never know what you might be missing," she said with a grin during a cooking demonstration.

"I'm an egg and meat eater," she confided during our breakfast. "I thoroughly believe in moderation, small helpings and great variety. I watch my weight and get sensible exercise. I walk regularly. The most important thing is to enjoy your work. I'm going to go on until I drop."

By God's grace, may we, at age 85, be as alert, vibrant, interested and interesting as Julia Child. What a person. What a legacy. What a life. Bon Appetit!

For information about the annual Symposium for Professional Food Writers, call or write:
Lynn Swain
c/o The Greenbrier
White Sulphur Springs, WV 24986
(800) 624-6070.
Or visit their website at: www.greenbrier.com/foodwriters/