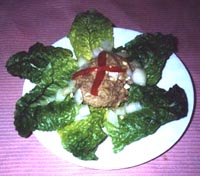 Chopped liver is perhaps the most maligned of foods. The very mention of it sends stomachs turning and noses upward. It's not elegant like pate; it has not gained the homey comfort level of liverwurst. It is lumpy, gray and well...it doesn't smell quite right. Next to its more refined cousins, it's not hard to see how the disparaging phrase, "What am I, chopped liver?" made its way into English language. But if chopped liver is so detestable, why do Jews persist in making, eating, and claiming to enjoy it?

For years I voiced these questions to my own family as they wolfed down gray mush. But they also ate gefilte fish so I knew they weren't to be trusted. My Aunt Karen is famous throughout my family for her chopped liver and no holiday table was complete without a large crystal bowl brimming with the slimy spread. She, however, was also the creator of Twenty Layer Jell-O and Cherry Chicken so her credibility had come into question as well. Even as a young child I knew that the liver, like the kidneys, is a garbage dump for waste products -- certainly not something to be ingested. So for years, despite the urgings of my relatives, I passed on the liver and waited patiently for the matzo ball soup. Little did I know what I was missing.

I managed to avoid chopped liver for the first half of my life. But when I was about 12 my mother and aunt threw an anniversary party for my grandparents. As an hors d'oeuvre my mother made knishes, half of which were filled with mashed potatoes, half with Aunt Karen's chopped liver. Looming in the kitchen, I watched my mother take the hot knishes from the oven. Snatching one from the tray I devoured it, savoring the flaky crust and the creamy potato filling.

And then it happened.

Taking another, I bit down into a steaming knish. The crust was hot and buttery but the filling was something altogether different. It was dense and rich. Its flavor was exciting but its texture was comfortable. At the same time exotic and familiar, it was truly and undeniably delicious. I had tasted my first chopped liver. While my initial reaction was revulsion, I quickly came to understand what everybody had been clamoring about.

The components of chopped liver are mundane at best but the union of liver (chicken is traditional but my aunt uses calves'), sautéed onions and hard-boiled eggs transcends the ordinary nature of the raw materials. The flavor stays true to its humble ingredients yet when they are ground together they become haunting and rich. It is reminiscent of the flavors of the farm but with a depth that reaches far beyond. Chopped liver may be peasant food but even peasants deserve to indulge.

This delicacy does not come without a price; chopped liver is terrible for you. Though high in protein and iron, it has enough fat and cholesterol to kill a small army. But if it is treated as it should be--as a special occasion food--your heart and arteries should be able to survive. I restrict my own consumption to certain times and places: when visiting my family for the holidays, as an appetizer before Don & Charlie's BBQ ribs in Phoenix and as a sandwich spread with corned beef at Zingerman's deli in Ann Arbor. These meals are always indulgent with large amounts of heavy foods. They are the kind of meals after which you unbuckle your belt, pat your belly, and think of nothing but the food you have just consumed and the people with whom you consumed it.

Despite dietary concern, or perhaps in spite of it, Jews will continue to eat chopped liver. It is a food of holidays and of family. It is a cultural icon of both industriousness and indulgence. Spread thickly on a slab of chewy rye or layered with corned beef and coleslaw, it transforms the plain into the sublime. It would be a disservice to chopped liver to insult it with critical comparisons. What are you...chopped liver?

You should be so lucky.

Hard-boil eggs. Peel and set aside.
In a large skillet, fry onions in shortening until lightly browned. Set aside. If needed, add more shortening to skillet and sauté liver until just done. Remove from skillet.
Using a meat grinder coarsely grind ingredients separately. (If a you do not have a meat grinder, a cuisinart can be used but results will be pastier). Season to taste with salt and pepper. Mix in a large bowl.

Refrigerate until ready to serve with rye bread and bagel crips.